The Dilemma of Interpretation, Pastiches, and Sherlock

"thousands of other similar cases " [REDH] 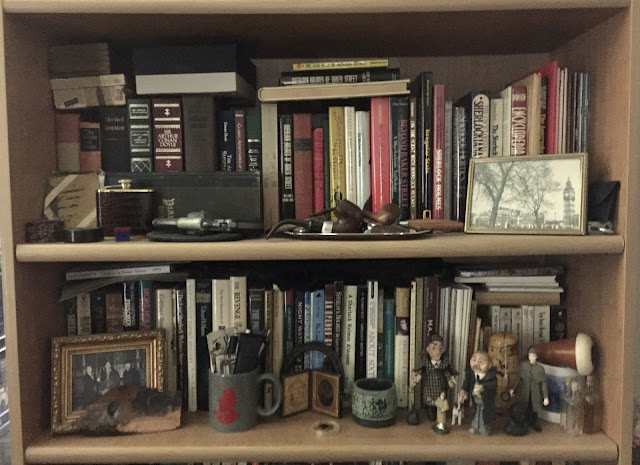 No one inhabiting the Sherlockian realm is unaware of the volcanic ire unleashed since the broadcast of Sherlock Series 4 “The Final Problem,” presumably the series' final episode.

My goal is to remind my friends that the flowing lava will cool in time. In fact, many pastiches of the past were criticized or snubbed in their day, and now are generally regarded with intense affection.

I've commented in other forums about the nature of pastiches and how we’ve come to regard them. The following is an updated version of an essay I offered in the early 2000s in the Hounds-L listserv -— I was known as “The Lurking Man” — with insertions pertinent to the Sherlock brouhaha, drawn from my comments in a recent Facebook thread.

Let's admit at the onset that part of my soul is utterly mystified by the repeated references one comes across to Sir Arthur Conan Doyle having "conceived" the Canon. And yet another part of me understands the widespread delusion that, somehow, Dr. John H. Watson relinquished all control of his notes to Doyle and that the Literary Agent was in fact the Author.

If we aren't reading chronicles related by Watson-as-Biographer, it goes a long way toward explaining why there are so many different Holmeses within the Canon itself. In fact, the premise helps us to understand why so many of the later "stories" actually appear to be pastiches flowing from the presumably mighty pen of Doyle-as-Author himself.

Take, for example, the different Holmeses of A Study in Scarlet and The Sign of Four. In the first, Holmes is youthful, glib, friendly, chimerical, outgoing, arrogant, energetic, full of brightness and even fun. In the second, he is taking cocaine thrice a day, and when he is not occupied with the case he is moody, brooding and pessimistic. (I reiterated this point recently in an essay about “The Speckled Band,” published in Christopher Redmond’s remarkable compilation About Sixty.)

We see glimpses of these two Holmeses throughout other stories, and we reconcile them by claiming that, at times, Holmes must have been manic depressive or simply dual-natured. But perhaps Doyle-as-Author was dual-natured himself and this tendency emerged in his writings, based on his imagination-of-the-moment.

A third Holmes often appears, and is neither of these other Holmeses — not the chemist / code-breaker / paralegal / actor / amateur anthropologist. This Holmes is a creative force who searches for things outside of the realm of crime — a varied mind that encompasses the multiple lives of a scholar, art lover, book collector, historian, musician, traveler and author.

This is a consistent, almost pointed characterization that emerges in many of these separate chronicles/stories. Each new aspect reflects on the same notion that here is a brilliant, wide-ranging mind that embodies the expansiveness of the Victorian era and the increasing opportunities becoming available to the rising middle class of English society.

In addition to fattening a cheque-book, either:

In the characterization of these various Holmeses we find a curiously consistent thread — the flash of a scintillating genius, through a glimmer here and a sparkle there, all adding up to a collective blaze that illuminates the body of work we call the Canon, even if individual entries are pale and dull compared to the whole.

When we read a pastiche, if we fail to note that spark, that glimmer, that slight jewel-shine that catches our eye and reminds us of that overall, highly personalized genius, then something is missing. Something is wrong. It doesn't ring true. The writer has failed to convince us that he is either Doyle-as-Author or Watson-as-Biographer. There's no subjective or objective reality on which we can suspend our disbelief.

However, if the pastiche-wright shows us something new, something jewel-like, it awakens our own inner genius. We recognize Holmes (or some version of him) as the man we met before, and the Master walks among these pages once again. That's a rare event, and such a perfect fiction is hard to forge, but it's no less an accomplishment than what Doyle-as-Author might have set out to do when attempting himself to re-invent Holmes for the later stories. In fact, in some cases, the accomplishment probably is greater.

For the purist, The Seven Percent Solution is a fabrication to be dismissed. But there's no doubt that Nicholas Meyer re-awakened some very real conception of Holmes for many, many thousands of people who had forgotten (or never known) the delight of reading about this man of genius living in a time when genius could thrive. This Holmes looked like what a Holmes should look like. That's why Meyer's fiction ranks highly — very highly — when compared with, say, "The Veiled Lodger" or "The Mazarin Stone," both found among the Sacred Writings but neither conveying a well-realized sense of what a Holmes truly should resemble.

Naturally, I hold a higher esteem for those works that I prize as having come from the pen of Watson-as-Biographer. I have enormous respect for all those that might even have come simply from the pen of Doyle-as-Author. However, if there exist new tales that provide a joy of sudden discovery, and convince me — however briefly — that another biographer has been located at last, so be it. A truly successful "Sherlock Holmes story" conveys to my judgment an appreciation of insightful genius, regardless of its source.

Genius can and does thrive all around us, and isn't necessarily found only in the same old place, between the covers of only one set of 60 stories about this or that version of Holmes.


"on which I would willingly dwell" [FINA]

This is why I came to enjoy rather deeply the Holmes I saw in several episodes of Sherlock, despite the show's obvious modernizations and manipulations of the Canon. When I noted the scripts' quirks and liberties, I reminded myself that I — with many other Sherlockians — had come to honor pastiches such as The Seven Percent Solution and Without a Clue, and view Nigel Bruce's childishness and Basil Rathbone's high-flying coifs with fond respect, even relish. Like many others, I gave Sherlock the same break.

After all, many of us cackle to see Holmes and Watson dumped into Loch Ness by a monster submarine, because Billy Wilder made it happen in The Private Life of Sherlock Holmes. Some of us even have come to see the made-for-television film Case of Evil as innovative and daring, despite its uncomfortable obsessions about sex and drugs. (Gasp!)

By canonical standards, all these interpretations and crazy dramatizations are heretical and loony, but time has allowed us to see these creations as appreciations rather than assaults. That means we can admire — even adore — what was offered, and what continues to be offered.

Remember, my friends: We came to terms with Jeremy Brett's unexpected, eccentric tics and outbursts, which were so deeply criticized when he first appeared on the scene. Brett, now regarded widely as the most canonical of all Sherlockian actors, initially was scorned by many fans who'd been married to the notion that Holmes was Rathbone.

That perception changed with time — and with the realization that it was all just an interpretation, and that the Canon still stood firmly in place, just as it does today.

Sherlock hasn't had the gift of time to separate us from our expectations and umbrage, but I suggest we all revisit these amazing programs in, say, 2037. Then we can pass the bottle and discuss amiably just how much fun all these shows have been, despite their ups and downs, heresies, looniness and flaws. We even may discover new ways to appreciate them — ways that only time can develop and reveal.

Perhaps then we also may look around the room and see how many of us have come to Holmes through Sherlock, and recognize what an astonishing service has been achieved on behalf of the Sherlockian world.

There are many true chronicles yet to be written and many dramatic interpretations yet to illuminate the screen. Let them come.

[Editor's Note: This is John C. Sherwood's first contribution to I Hear of Sherlock Everywhere. He is from Marshall, Michigan, and has been a professional Sherlock Holmes impersonator since 1987. He was Gasogene XVI of Watson's Tin Box of Ellicott City, Md., and a recent recipient of the Beggar's Cup from the Amateur Mendicant Society of Detroit.]