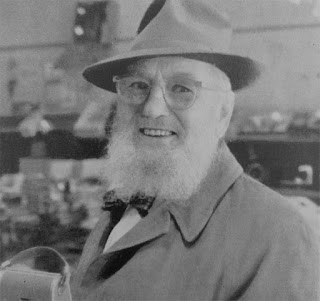 Somebody asked me a question the other day about Jay Finley Christ, BSI ("The Final Problem"), a Sherlockian whose immense contributions to scholarship (and fun) are by no means forgotten more than 50 years after his death. The Arthur Conan Doyle Encyclopedia has an extensive survey of his life and work, including the observation that "He is mostly famous for having created the system of abbreviations which shorten in 4 letters the titles of 60 Sherlock Holmes stories."

He was also the author of much good-natured Sherlockian writing, including a number of poems, among them "The Old Tin Box" (about Holmes's unpublished cases), issued as a pamphlet in 1946, and "The Story I Like Best," published in the Baker Street Journal in 1947, with this quatrain that I have quoted in more than one context:


Good Sherlock took full many a crook
In Adventures beyond compare;
And the best of the lot is the crafty plot
Of the man with the flaming hair.


There was also "The Song of Hiawatson" in 1956, a mashup of Sherlock Holmes with Longfellow's "Hiawatha," which perhaps was more widely known then than it is sixty years later.

Christ was a Chicagoan, recruited into the ranks of the Hounds of the Baskerville [sic] by Vincent Starrett himself. He was a professor of business administration at the University of Chicago for many years, and moved in the city's literary circles as well. Some of his works of Sherlockian scholarship, chronology and reflection appeared under his own name, some under the nom-de-plume of J. A. Finch.

The debt we owe him is not just for the four-letter abbreviations, but for his invention of Sherlockian reference works, specifically the Irregular Guide to Sherlock Holmes of Baker Street, published in 1947, for which the abbreviations were devised. Though a bit eccentric, like Sherlock Holmes's own good old index, the Irregular Guide is still one of the reference books to which I turn most often — when, for example, I want to find all the mentions of weather in the canonical tales, or all the references to boxers' ears.

Jay Finley Christ retired in 1950 and settled in Michigan City, Indiana, where he cranked up his Sherlockian production for the remaining 13 years of his life. He read and wrote in a little outbuilding — a man-cave, we would call it now — which his widow, Maud Christ, described later: "Jay built it all himself, even the fireplace, and put 221B over the door. Here he spent the happiest hours of his life."

I was just becoming a Sherlockian when he died, in December 1963, so I never communicated with him, but a little later I did have some correspondence with Maud Christ, who kindly sent me some souvenirs of the great man. Most interesting among them was a little tin, or at least steel, box containing several dozen 35-millimeter slides that he had made, presumably for some of the non-credit Sherlockian lectures. They were clumsy by today's graphic standards, photographed mostly in black and white from print material, and sandwiched in glass, but they included some classic images. They are now in the Arthur Conan Doyle Collection at the Toronto Public Library.

Later, I was able to acquire a real collectible: Christ's copies of the three-and-a-quarter volumes of the old series Baker Street Journal. He had had them bound in blue cloth, with his name ("J. F. Christ") stamped in gold on the spine, and I continue to refer to them regularly.

Unexpectedly, those volumes provide a window into the sad story of how the Baker Street Journal began bravely but later faltered, amid the financial woes of the publisher, Ben Abramson. It had been Christ's habit to note on each issue the date when it reached Michigan City, so that volume 1 number 1 is inked "Recd Feb 8, 1946". Volume 2, number 1, was slower to appear — "Posted 2/20 Recd 3/1/47" — and volume 3, number 1 did not show up until March 20 of 1948. After that, as the Journal's schedule slipped and eventually petered out, Christ made no more such notes.