The Six Thatchers — A Critic's Review 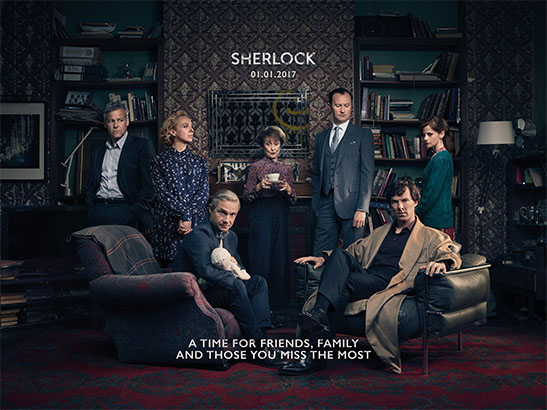 [Editor's Note: this is the second in a series of reviews we'll be sharing on Series 4 of Sherlock.]

Finally, after years of waiting, last night we saw the return of Sherlock. I know I've come to be seen as being down on the show, but that perception isn't correct. I am simply honest about it. Once again, for the record, the first two Series were a revelation, and its popularity and reputation were entirely deserved. Just tremendous.

But then came Series 3.

From that point on the show was a train wreck, full of self-conscious awareness of its success and cleverness, corrosive pandering to a frenzied fringe in its fan base, and a departure from modern-day adaptations of the Canon to just riffing on itself.

Other critiques — particularly on Facebook —  have pointed out that the show isn't really an adaptation of the Canon, but is instead its own thing. But this is in direct contradiction of Moffat's and Gatiss's own stated intention for the show. Once its own mythos overwhelmed this intent in Series 3, the show lost its way. Badly.

With Cumberbatch's and Freeman's exploding popularity — perfectly justified — and their clearly and repeatedly stated disenchantment with filming the show, it's been a long three years since we've seen Sherlock on TV (not including "The Abominable Bride"). As "The Six Thatchers" drew near, my attitude was one of "hope for the best, fear the worst."

Having said all that, "The Six Thatchers" was a serious improvement on the series since its heyday. The creators obviously heard the criticism. We know they listen to fans (too much so in the past), but we know Moffat and Gatiss are real Sherlockians, and it appears they took some of the criticism to heart.

Right out of the gate, they set about fixing many of the mistakes of Series 3: the cold-blooded murder of Charles Augustus Magnusson was an abomination, and so utterly wrong that no amount of tortured fan-rationalization could justify it. Within the first five minutes, they simply made it go away, "like it never happened." I'm sure they wish it really did never happen.

They also did away with the disingenuous gay-baiting which fed a lunatic-fringe fan-base that I believe nearly drove the stars (especially Freeman) away from the show. This is no surprise as Gatiss explicitly stated in recent interviews that "Johnlock" is never going to happen and furthermore was never intended to happen — clearly distancing themselves from this fan fetish that undoubtedly helped make this the last season of the show.

Finally Sherlock got back to brilliantly updating Canonical mysteries, and gave Sherlock Holmes real detecting to do. We see him actually having cases and clients again, something that shouldn't be a novelty.

This is not to say there weren't problems. They still had another mess from Series 3 to clean up: the Mary Morstan as international ninja assassin. Of course, Mary was always marked to eventually die (after all, in the Canon she did). Moffat and Gatiss certainly could have kept her around until the end of Series 4, but instead thankfully exercised their option to get the show back to basics.

The first 45 minutes of "The Six Thatchers" is brilliant —  as good as anything in the first two seasons. But once it was compelled to deal with the Mary Morstan backstory, with the tortured international intrigue, etc., it bogged down. And then, once back in London, the show found its way again. Even in the novels, whenever the backstory has comes in, pacing and interest go down.

And now, in a way I haven't felt for years, I am excited to see the next episode, and regret that this will undoubtedly be the last set of shows in the series. Having found its way again, will this series have the impact and influence it originally did?

Alas, most of the air has gone out of that balloon, but to know that this series looks to end as well as it began (unlike the Granada series, for instance), my gratitude to Moffat and Gatiss is immense, and Sherlockians everywhere owe them a debt for what they brought to our hobby.

Now, I only hope I get home from New York next weekend in time to see the next episode!