To Sherlock Critics Discerning and Undiscerning 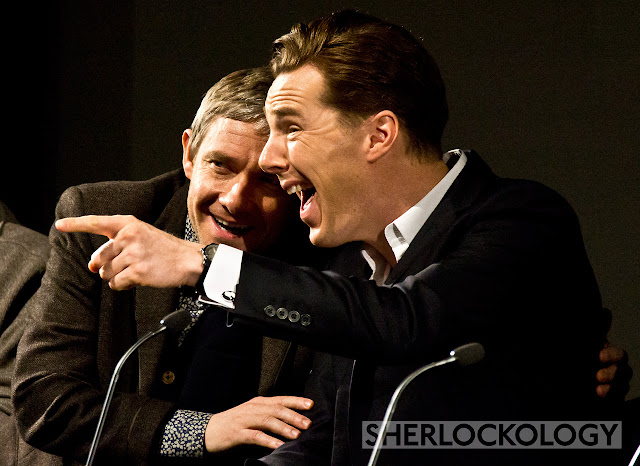 The influence of Edgar Allen Poe's Dupin on Sherlock Holmes has been much discussed; it is generally agreed that, though Holmes himself professes to be little inspired by Dupin, Poe was indeed an influence on Conan Doyle. Unhappy with this state of affairs, in 1915 critic Arthur Guiterman addressed a poem "To Sir Arthur Conan Doyle," placing into question the originality of his most famous creation:

Holmes is your hero of drama and serial;
All of us know where you dug the material
Whence he was moulded — ’tis almost a platitude;
Yet your detective, in shameless ingratitude —
Sherlock your sleuthhound with motives ulterior
Sneers at Poe’s “Dupin” as “very inferior!”
Labels Gaboriau’s clever “Lecoq”, indeed,
Merely “a bungler”, a creature to mock, indeed!
This, when your plots and your methods in story owe
More than a trifle to Poe and Gaboriau,
Sets all the Muses of Helicon sorrowing.
Borrow, Sir Knight, but be decent in borrowing!

The gauntlet was thrown down, and Doyle, a gentleman, could do nothing but protect his honor, and so he responded - with pen rather than sword- by penning "To the Undiscerning Critic":

Sure there are times when one cries with acidity,
“Where are the limits of human stupidity?”
Here is a critic who says as a platitude
That I am guilty because “in ingratitude
Sherlock, the sleuth-hound, with motives ulterior,
Sneers at Poe’s Dupin as very ‘inferior’.”
Have you not learned, my esteemed commentator,
That the created is not the creator?
As the creator I’ve praised to satiety
Poe’s Monsieur Dupin, his skill and variety,
And have admitted that in my detective work
I owe to my model a deal of selective work.
But is it not on the verge of inanity
To put down to me my creation’s crude vanity?
He, the created, would scoff and would sneer,
Where I, the creator, would bow and revere.
So please grip this fact with your cerebral tentacle:
The doll and its maker are never identical.


The last line, in particular, has been oft-quoted in discussions about the similarities between Doyle and his creation.


Well, it sounds like a feud between another undiscerning critic and another Sherlock Holmes creator continues in verse. As you may be aware, there are a variety of opinions swirling around the Internet regarding Series 4 of Sherlock. And it seems no one is showing any restraint in sharing those opinions.

In a recent Guardian article, Ralph Jones threw down the gauntlet, lamenting that Sherlock Holmes is turning into James Bond, and Gatiss, not to be outdone by Doyle, similarly responded to the accusation in verse, titling it "To an Undiscerning Critic (With Apologies to AC Doyle):


Here is a critic who says with low blow
Sherlock’s no brain-box but become double-O.
Says the Baker St boy is no man of action –
whilst ignoring the stories that could have put him in traction.

The Solitary Cyclist sees boxing on show,
The Gloria Scott and The Sign of the Fo’
The Empty House too sees a mention, in time, of Mathews,
who knocked out poor Sherlock’s canine.

As for arts martial, there’s surely a clue
in the misspelled wrestle Doyle called baritsu.
In hurling Moriarty over the torrent
did Sherlock find violence strange and abhorrent?

In shooting down pygmies and Hounds from hell
Did Sherlock on Victorian niceties dwell?
When Gruner’s men got him was Holmes quite compliant
Or did he give good account for The Illustrious Client?

There’s no need to invoke in yarns that still thrill,
Her Majesty’s Secret Servant with licence to kill
From Rathbone through Brett to Cumberbatch dandy
With his fists Mr Holmes has always been handy.

Then The New York Times joined in the fray, penning its own summary-in-verse of the ongoing feud:

Mark Gatiss is a clever chap;
He always has a line.
So when a Guardian critic wrote
To say all was not fine

With Sherlock (who in Season 4
Is rather keen on action;
Dispatches villains and much more
With the quickest of reaction)

Mark G. thought it was time
To offer reasons why
— in perfect, scannèd rhyme —
Sherlock’s really a tough guy.

We’re worried, wrote the critic,
That Sherlock is now James Bond.
His mental feats are all we need;
He shouldn’t go beyond.

Not so! Mark G. replied,
With a list of action tales:
“The Solitary Cyclist” (with boxing on side),
“The Sign of the Fo,” and much more that hails

The detective as pretty fit:
As quick with his fists as with his wit.
Mr. Gatiss wrote with usual skill
Of Sherlock’s sang-froid at the kill.

Here Mr. Gatiss was rather kinder
Than Sir Arthur Conan Doyle,
Who in 1912 fired off a reminder
At one who critiqued his toil:
“Sure there are times when one cries with acidity,
‘Where are the limits of human stupidity?’”

Not to be outdone, Jones penned a rejoinder to Gatiss that smacked of the Rex Stout / Julian Wolff literary feud from the 1940s (see "Watson Actually Was a Woman"). It was titled "The Second Letter" and it appeared on Shortlist - complete with a puzzle to solve (how Sherlockian!):

Kind though it was for you to pen a reply,

Swelling with righteousness I think that I
Would like to respond to your words if I may
But only because you so brightened my day.
Alarming, beguiling, it couldn’t get better;
Addressing a poem to me in a letter?

Thank you, Mark Gatiss, but let me be frank:
Sadly the content was a big load of
Splendidly written but baffling verse;
Speaking directly now, I will be terse.
Fisticuffs, yes, Sherlock scuffles a bit;
Clearly he’s a man who can dish out a hit.
By paragraph four (you can pop back and read it),

I’d said that his muscle is there should he need it.
Holmes is unlike Bond in that he is mortal;

It’s difficult not to explode in a chortle
When he lands countless blows on a dude paid to kill.
Simply and plainly: that is way too much skill.
Is there some violence in Conan Doyle’s prose?

Of course there is, as I think everyone knows.
So when I beseech that you show some restraint
I really don’t mean that the programme be quaint.

I’m saying that Holmes and his love of a mystery
Look terribly close to being BBC history.
Enough on this point though, I think I might bore you.
It’s time I unveiled the code I wrote for you.
Why not go back and check the first word on each line?
Using the title, tell me what you divine.


Did you catch Jones's code?

Who knows what feat of metrical valor and poetic derring-do will come next? In the meantime, it is refreshing to know that old traditions are being kept alive.