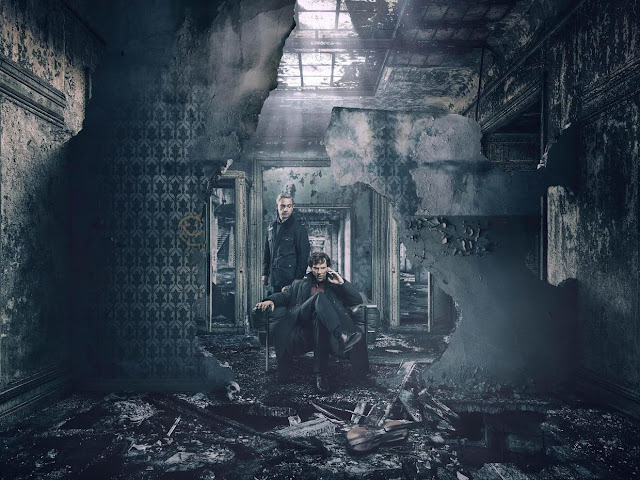 [Editor's Note: this is the 14th in the series of reviews we're sharing on Sherlock Series 4. And spoilers? Yeah, we got that.]

After six years, Sherlock Holmes’ journey is complete. Series 4 of the hit BBC series has come and gone amid rumors that this latest offering could be the very last we see of the detective’s famed modern incarnation. “The Six Thatchers,” “The Lying Detective,” and “The Final Problem” represent the culmination of a six-year-old story, and in a way that recalls the very best of Sir Arthur Conan Doyle, these tales give us a rollicking, powerful ending that still manages to toss out all of the viewer’s lingering preconceptions.


If you come into this crop of episodes expecting to be entertained by intricate Holmesian plots, you may emerge from your viewing with disappointment. There is a lot going on in this season—along with trying to solve the overarching mystery of Moriarty’s continued appearances from the afterlife, Sherlock and John must confront the unspeakable tragedy of Mary Watson’s death and unravel the secrets of the previously unknown Holmes sister, Eurus. All of these storylines are compelling to follow, but the sheer amount of material that has to be covered sometimes reduces the impact of the individual episodes themselves.

The strongest standalone tale of the bunch is certainly “The Lying Detective;” in addition to possessing the best single-episode villain in the entire series' history, Toby Jones’s chilling Culverton Smith, our main characters both have time to solve a case and cope with their traumas. In contrast, “The Six Thatchers” and “The Final Problem” race through their scenes at breakneck speeds, leaving fewer quiet moments for the audience to savor even as they create almost unbearable dramatic tension.

While some of the plots are slightly jumbled, there are still plenty of delights to be found throughout all three episodes. As always, the performances are top-notch; Benedict Cumberbatch and Martin Freeman brilliantly infuse Holmes and Watson with believable shades of ambiguity that challenge our perceptions of the famed heroes. And, as in “The Abominable Bride,” the women of the show get another opportunity to shine. Even as a figment of John’s imagination, Amanda Abbington is a heartbreaking delight as Mary Watson. Series newcomer Sian Brooke steals every scene she’s in, making Eurus Holmes a singular creation that is equal parts terrifying and pitiable. And Una Stubbs may have just cemented herself as the definitive on-screen Mrs. Hudson, bestowing the beloved landlady with an indomitable spirit and the driving skills of James Bond.

A furor has recently been raised about this series’ similarities to the Bond films, but I actually find the season’s referential nature to be a strong point in its favor. Sherlock has never been shy about drawing upon outside influences, but it’s fun to see the writers stretch beyond the Basil Rathbone canon and instead incorporate elements from Bond, The Silence of the Lambs, and even Batman’s Arkham Asylum. What makes them all work is that these sources once drew from Sherlock Holmes; now, the show is returning the favor while still maintaining a distinctly Holmesian twist in re-adaptation.

Even after brawling over a bust of Margaret Thatcher, Sherlock still finds it necessary to dramatically announce that he’s found the Black Pearl of the Borgias with a wording that doesn’t sound too far removed from the actual canonical text. Instead of engaging in a philosophical prison debate à la Batman and the Joker in The Dark Knight, Eurus torments her brother by demanding a violin performance from her jail cell. Steven Moffat and Mark Gatiss have always pushed the boundaries of how adaptations can pay tribute to and innovate their source materials, and their experiments in this respect continue to be an entertaining spectacle to witness and analyze.

"pray what remains for you?"

But perhaps the largest success to come out of series four is in its resolution. I was keenly aware as I was watching “The Final Problem” that I was witnessing an ending that had been building since “A Study in Pink,” and one that has always been reflected in the title of the show. When we were first introduced to Sherlock way back in 2010, he was a high-functioning sociopath who couldn’t even understand why someone would be distraught over losing a child. He was prickly, irascible, petty, and brilliant—even Greg Lestrade couldn’t deny that he was great and terrible. But it quickly became clear that the show’s goal wasn’t to see Sherlock achieve further illustriousness; if they had wanted to associate him with greatness from the start, the title would have been Sherlock Holmes, which would have instantly aligned this version of the character with his iconic legacy. Sherlock was not fully formed—it demanded evolution.

This season was not the climax of the entire series’ plot; it was its emotional apex. Sherlock’s character transformation was wrenching and revelatory in these three episodes—he finally saw the disastrous consequences of giving into his own ego. Instead of lapsing into drug use to stave off his own boredom, Sherlock went to hell and back in service of a friend. This character finally was able to be there for other people—he hugged the bereft John Watson; he was able to bring Eurus Holmes down to earth by promising to be by her side, not through a series of dazzling deductions. Greg Lestrade could smile when he realized that his hope from six years ago had been realized.

Instead of being great, Sherlock Holmes finally became good this season. If it turns out there are more journeys with him ahead of us, I know I will look forward to seeing what they will be like with the good detective and his best friend.