The Six Thatchers Requires a Leap of Faith

"There is nothing more deceptive than an obvious fact" [BOSC] 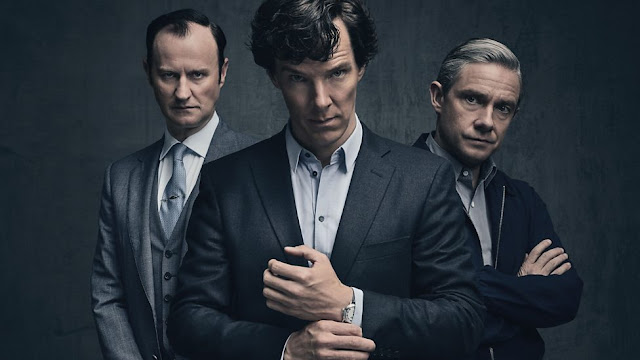 [Editor's Note: this is the third in a series of reviews we'll be sharing on Series 4 of Sherlock.]
Sherlock is like an onion, and not just because it makes you cry.

It’s always made up of layers. Moffat and Gatiss are supreme fanboys, and Sherlock is the story into which they pour both their love and expertise of the original, meaning that it’s always packed full of meaning on multiple levels. Each episode has a superficial story (or several), but beneath the surface is always an overarching plot, clues and red herrings pointing towards (or away from) said larger plot, subtext, hidden allusions to the Canon, and Easter Eggs.

That’s because, on the surface, “The Six Thatchers” a bit lackluster. It skips disjointedly between Sherlock’s name being cleared of Magnussen’s shooting, a comic interlude, the birth of Mary and John’s baby, and its Christening in a hectic space of barely half an hour. Cases follow each other at a similarly hectic pace, and one – an adaptation of "The Six Napoleons" – transforms suddenly into Mary’s backstory, which we finally learn, and her seeming redemption (which is complicated by an after-credits scene of Mary telling Sherlock to “go to Hell”).

In a lot of ways, it’s also nonsensical. It starts with a seeming flashback to “His Last Vow,” but the footage of it turns out to be edited, belying the “previously on Sherlock” that the episode begins with. This sets the stage for what’s to come: a story that should be taken with a grain of salt, because it feels distinctly off.  The layouts of 221B and the Watsons’ flat have been reversed; the famous skull painting at 221B is distinctly different from what it usually is and magically glowing. The flashbacks and flash-forwards are seemingly random, as the story jumps from Sherlock’s point-of-view to John’s unexpected reminiscences about a potential dalliance with a lady on the bus (who, it seems, will turn out to be Culverton Smith’s daughter). [Editor: This is purely conjecture at this point, as we have not screened episodes 2 or 3.] Sherlock is obsessed with finding the Black Pearl of the Borgias, wanting to see connections where none exist. It’s almost like reality and narrative structure are falling apart.

But the more you peel away the layers, the more you discover. And what you discover can either make the story fall apart further and seem nonsensical, or it can convince you that it’s indeed a layered tale, full of hidden meanings, clues, and the seeds of a payoff that won’t become evident until the end of the season. If you believe (or know) that Moffat and Gatiss are knowledgeable fanboys, you’ll enjoy “The Six Thatchers,” with all the possibilities it provides for taking a crack at being Sherlock Holmes and trying to deduce the truth. If you don’t, then you won’t.

But that’s always been the best thing about Sherlock: it’s a show that refuses to be watched passively. Like the Canon, it’s a fiction where the ostensible story is just the tip of a very large iceberg.

The cinematography itself is also markedly different from previous episodes: watery ripples overtake images on the screen, sound and sight falls away at inopportune moments (such as when Sherlock hyper-focuses on the Thatcher shrine), images double nonsensically and mirrors abound. It’s almost as if the fabric of reality has been affected, and, more than that, compromised.

Of course, one could chalk all that up to a writing flub on Gatiss’ part, but it’s just as plausible that it was the intentional product of writers, directors, and cinematographers working together to give the episode a distinctively different feel. Which of these two options it is will likely become evident in a week (two at most), so with the possibility that I will stand entirely corrected, I’d like to suggest that this was an excellent episode because it skillfully represents the deliberate breakdown of reality and narrative structure.

At a particular moment of the episode, a shattered bust of Margaret Thatcher overlays Sherlock’s face, giving the sense that it is Sherlock that is being broken and shattered, not the busts of a former prime minister.

That moment may very well be the key to the episode. Nothing is what it seems – in particular if it’s told from Sherlock’s point of view, which is hardly trustworthy considering the number of times his senses and sanity have been compromised lately. It’s hard to tell what is happening in Sherlock’s mind and what isn’t: water imagery abounds, appearing at the most unexpected of places to create almost a sense of drowning, and often accompanying Sherlock’s voiceovers (which are another new, unexpected addition to the show – suggesting, perhaps, that we’ve moved from John’s point of view to Sherlock’s). The episode happens right after his drug overdose on the plane (where we saw even Sherlock’s dreamed-up reality fracture every time Moriarty appeared); it’s full of dream-like sequences (one featuring Sherlock’s dog, Redbeard, which we first saw in his Mind Palace last season), he gets drugged by Mary halfway through, and admits at the end that he’s been having recurring dreams.

This wouldn’t be the first or last time that Sherlock has misled the viewer in terms of what’s real (the fake explanation sequences of “The Empty Hearse” come to mind), and it’s entirely plausible that the disjointed, nonlinear structure of this episode isn’t the failed product of a seasoned television writer and actor, but rather an intentional reflection of either Sherlock’s state of mind, a misleading narrative, or both.

That’s the best part about Sherlock: in it, details contain multitudes, obvious facts are deceptive, and trifles are the most important things. Of course, I could be wrong about this complex castle of theories I’ve constructed, but the best part is that I’ll know how well I took a leaf from Sherlock’s book and spun my theories soon enough.


I can’t wait until next week, if only just to be proven right. And that’s one hell of a cliffhanger.