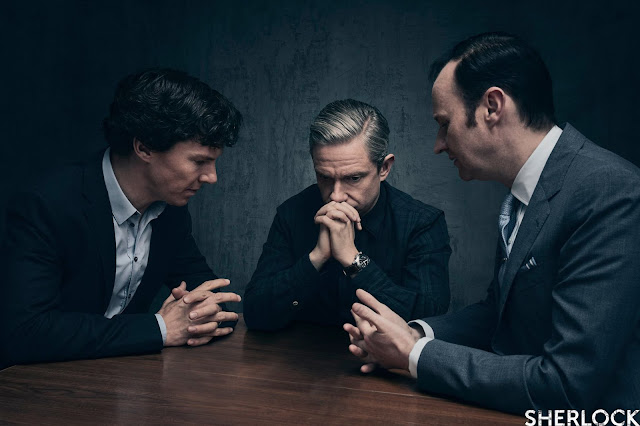 [Editor's Note: this is the eighth in our series of reviews for Series 4 of Sherlock. There are spoilers below. Don't say we didn't warn you.]

Where to begin? How does one describe this beautiful mess, this sublimely ludicrous end to a season that has delighted and frustrated so many viewers? Well, I guess we have to start with the obligatory spoiler warning. I mean, for the love of all that is Sherlockian, don't think about reading any further until you've watched the final episode of Season 4 of Sherlock: "The Final Problem."

Let's start with that title: despite the obvious reference to perhaps the most famous of all Holmes stories in the Canon, this episode has little to do with Doyle's story of the same name. Moffat and Gatiss had already plundered Doyle's "The Final Problem" back in Season 2, with "The Reichenbach Fall." So plot-wise, there's not much in the way of references to that source material, other than a certain air of finality at the end of the episode. But more on that point later...

There are references to the Canon, of course, as we have come to expect from this series: the reference to "The Three Garridebs" (just their names—the plot point is completely different); the "Dancing Men" reference in the final montage. Perhaps other more eagle-eyed Sherlockians will detect other clues. And there was a delightful detail in the final shot, where a placard on a building clearly reads "Rathbone Place," a cheeky little extra-canonical tidbit. But I'm getting ahead of myself again.

As a fan of comic books when I was younger, I can't help but think that the island fortress of Sherrinford was reminiscent of Arkham Asylum from the Batman series: a place where only the most brilliant of the criminally insane reside. Meanwhile, the writers made the parallel to Silence of the Lambs explicit in the scene where Sherlock first visits Eurus at her cell, and a guard refers to the famous film/novel. Eurus certainly brought Hannibal Lecter to mind right away.

Perhaps one of the biggest laughs I got (maybe the only laugh, considering the dark tone of the episode) was when the camera panned down through the floor at 221B, to show Mrs. Hudson vacuuming her floor, while listening to Iron Maiden's "Number of the Beast" on her headphones. No, that's not right, I did laugh at one other spot: the great musical cue at the beginning of the flashback to Moriarty's visit to Sherrinford, wherein he's listening to Queen's "I Want to Break Free." Typical Moriarty flash and cheese, all in one delicious moment.

At this point, though, I have to ask myself: canonical references and humorous musical cues aside, what about the rest of it? Did this episode, in fact, make any sense?

No, I don't think it did. For all their attempts to really wow us, with all the suspense — will Sherlock shoot Watson or Mycroft? Will Mrs. Hudson perish in the explosion? Will Molly Hooper die because she won't say "I love you"? — for all that, much of the action felt horribly contrived to me. If anyone has watched any of the Saw films, there's often a point in those elaborately executed torture traps where the viewer thinks, "How could anyone possibly set all of this up?" In the case of Eurus Holmes, a woman who had been incarcerated for much of her adult life, I found myself thinking the same thing: even with the help of the guards that she had (almost magically) talked into doing her bidding, there was just too much planning and almost superhuman omniscience involved in setting up her elaborate test of brothers Sherlock and Mycroft.

Speaking of superhuman, we're also forced to believe that Sherlock, John and Mycroft (not to mention Mrs. Hudson) all walked away from the huge explosion at 221B, with nary a scratch on them? For heaven's sake, Sherlock and John were blown through a second story window! 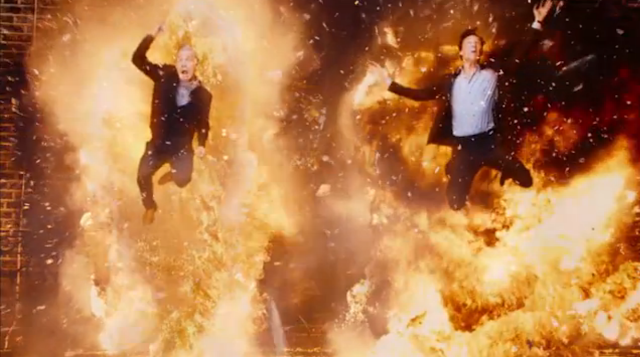 But this same superhero-style Sherlock doesn't even realize that there is no glass between him and Eurus, the whole time he's talking to her? Nope, sorry, I don't buy it. I've stood in front of glass walls, and it's quite easy to tell the difference between glass and thin air. And it takes that long for Sherlock to figure out that the little girl on the plane is all a ruse? As they have in the past, Moffat and Gatiss seem to have thought we, as viewers, would simply accept their overly elaborate game (that's "not a game any more," according to the trailer), and not notice how far-fetched the whole thing was, or how lame Sherlock has gotten at figuring things out.

Almost the entire length of the episode, I just kept thinking, "No, that wouldn't happen that way...no, that just isn't possible." Just as they did at the beginning of Season 3, when everyone wanted to know how Sherlock had survived his "Reichenbach Fall," the Sherlock writers simply said, "We don't need to explain it. Sherlock's just the cleverest man alive." Except for when he's not. Which leads me to the end...

There has been much speculation, especially as Season 4 has progressed, as to whether this will be the last season of Sherlock. The final montage of this episode certainly seemed to lean that way: Mary's final words about her "Baker Street Boys...Sherlock Holmes and Dr. Watson!" had a definite air of finality about them. Are Moffat and Gatiss going to accomplish what Arthur Conan Doyle failed to do with his "Final Problem"? Will this be the end of the story? Doyle tried to kill off his detective, but ended up bringing him back to life. All of our favorite characters (well, most of them) are still alive and well at the end of this "Final Problem." So I guess the future of the series is still open.

Of course, that leads me to my final dilemma: how do I view this episode as a series finale, rather than just a season finale, if that's what it turns out to be? I suppose, to a certain extent, this finale demonstrates what Sherlock has always been: entertaining, frustrating, impressed by its own cleverness, slick, modern, and completely in love with its source material. I mean, that's what's kept so many of us coming back, through the long hiatuses and all that, isn't it?

It's always been clear (to me, at least) that Moffat and Gatiss absolutely adore the characters and stories created by Arthur Conan Doyle. In the end, if it is actually over, the whole series is kind of like a crazy, devoted fan fiction: they have always said, "What if?" What if Sherlock Holmes and John Watson were living in today's world? What stories could we tell about that?