The Lying Detective — A Review (and Possibly a Rant)

"It will be cold and bitter" [LAST] 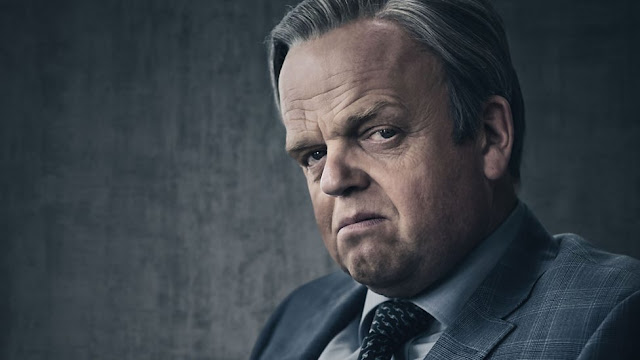 [Editor's Note: this is the fourth in a series of reviews we'll be sharing on Series 4 of Sherlock.]

If you type “Sherrinford” while looking at England in Google Maps, nothing appears (except the Sherlock Holmes Museum, but that’s not the point.) I mention this because I’m the sort of person who thinks it would be delightfully maddening if there were an asylum or prison with that name associated with it in real life.

Yes, consider that your warning that there will be significant spoilers in this review of the Sherlock episode, “The Lying Detective.” I presume you have watched the episode, and that you saw the one before it, “The Six Thatchers.” If you haven’t seen either of them, I recommend you stop reading and do so. I’ll be here when you’re back.

The creators warned that this would be a dark season, and this one time it turns out they weren’t lying. “The Lying Detective” begins with John in a self-loathing cycle and hallucinating his dead wife, while Sherlock is high out of his mind on a self-destructive streak the size of Texas. Both performances are excellent, from Martin Freeman’s subtle intense numb anger to Benedict Cumberbatch’s rapid descent into physical and psychological ruin.


My favorite character of the episode, however, has to be Mrs. Hudson. Mrs. Hudson is the most formidable landlady in London, and a national — nay, global — treasure. Una Stubbs does more for that character in this episode than what the writers gave her to work with for the entire series. I will watch Mrs. Hudson call Mycroft Holmes a reptile any day, any time. I also have to mention Toby Jones’s skin-crawlingly creepy Culverton Smith. Moriarty was an insane genius, but Culverton Smith is evil, and not so shockingly corporate/materialist based. Jones provides a wonderful performance, switching between celebrity hugs and deadly menace with ease.

With such good performances from the primary cast, it is a bit disheartening to see Louise Brealey wasted. Honestly, if all Molly Hooper is going to do is show up for a scene to weepily scold Sherlock for using drugs, she might as well just not show up. We’ve seen that before. Give the woman, that sweet, complicated, misused, inexplicably loyal, woman, something to do!

Though the performances are great, the characters are not in a good place, particularly John. Culverton Smith, of all people, voices what should have been the audience’s main concern when he asks John, “What kind of a doctor are you?” It’s an excellent question. John doesn’t seem to actually care that his friend is destroying himself, which is not how John, or anyone for that matter, should react. In his very brief talk with Lestrade later, John blames it all on the fun, on being distracted by the adventure, when really it’s his grief and anger overwhelming him. Sherlock knows it. He hopes that his self-flagellation in the form of nearly killing himself, of letting John beat him, will trigger some sort of desire for reconciliation, or possibly act as simple catharsis. It’s disturbing to watch, and makes Mrs. Hudson’s earlier declaration that Sherlock is the emotional one so much more poignant. He’s always the one doing something impulsive and emotional - he stabs things to the mantle for crying out loud - while John’s anger and frustration is bottled up until it explodes into physical violence.

As a brief aside, screw you, Mary Watson, for telling Sherlock to go to hell for John. Was there ever any doubt that he would? All she did was exacerbate the situation, making Sherlock feel even worse, going to far greater lengths than he needed to to get John back. I had the impression that up until the moment where Culverton Smith makes him say he doesn’t want to die, that Sherlock might actually have wanted to. Mary’s death was already a blow he didn’t know how to cope with. Seeing her tell him to ‘save John’ when he couldn’t save her was just an additional reason for him to hurt himself, and entirely superfluous.

John decides to save Sherlock after seeing Mary’s message to Sherlock to save John, and that also rings false. Yes, John’s angry, and hurt, and all sorts of things, but, to echo Culverton Smith, what the hell kind of a doctor is he? More than that, what sort of person sees their friend clearly hurting themselves, and brushes it off as a cry for attention, or worse, as just being a jerk?

John admits he’s not the person Sherlock, or Mary, or the audience apparently, thought he was. A text from Irene Adler (why not, I guess) spurs John into urging Sherlock to find someone to bring out the best in him, to make him be the person the one he loves wants him to be, and this soon turns into a heartfelt confession to Mary. This is by far the best scene in the season so far. It’s a moment of quiet emotion, necessary in the storm that comprised the rest of the episode, and much of the previous as well. Sherlock’s expression as John begins talking to the woman who isn’t there is a perfect realization of just how broken they both are. He puts aside everything for the moment to do the only thing he can to try to help his friend, and holds him. They aren’t ok, and probably won’t be for a long time, but it is what it is.

This scene alone is the reason the episode works. Culverton Smith’s plot is deftly woven, the acting is superb all around, and we even get to see Sherlock make deductions instead of being a globe-trotting action hero, but it would all have been for naught if this scene hadn’t worked. If there is a message in the episode, it is that everyone is human. When Sherlock says this, and John parries with a sly, “even you,” Sherlock’s response is perfect, and sums up their relationship in two words — “Even you.” Forget the woman, Sherlock already has someone he cares about to show him who the person he wants to be is, to make him want to be the sort of person he should be, and his name is John Watson. He’s far from perfect, they both are, but they can do the best they can to be what the people they love see in them.

And then Eurus blows in from nowhere, ties up a few loose ends with half a minute of monologue and making you wonder just how many skeletons in the Holmes family closet are there, and then shoots a gun in John’s direction.

I can’t use the kind of language I want to use to describe my reaction at this development. One more twist, because really, it’s so much more entertaining to shove an episode’s worth of deduction and slow character reveal into a cliffhanger moment. If you weren’t sure, the previous sentence should be read as dripping with sarcasm.

I knew the ‘affair woman’ was going to be a big figure, because that’s how TV show formulas work. I knew Culverton’s daughter looked different between the beginning of the episode and showing up at 221B, but I put it down to the passage of time. I thought the therapist looked familiar, but put it down to actors being reused in minor parts. And, no, at no point was it explicitly stated the Holmes sibling was male. It still seemed like a whole lot of data was shoved into a very short time frame, and felt a little bit like cheating. I don’t think I’m just being bitter, either. To invent a character out of whole cloth is their prerogative, but to bring the villain of the piece forth out of the blue and pretend she was really there the whole time is something else entirely. It worked once for Doyle. No one else has ever pulled it off well.

While I’m on the subject: Eurus? Really? I appreciate an oblique Canon reference as much as the next Sherlockian, but the Holmes parents are simply awful people if they named their daughter after the bad-luck bringing east wind of Greek myth.

At any rate, Eurus has arrived, and I have no doubt that the next, and final, episode of the season will see our heroes and their friends “wither before its blast,” but I hope beyond hope that they will “lie in the sunshine when the storm has cleared.”

Otherwise, this whole season might not have been worth it.