“Elementary, my dear Watson” — The Birth of a Quotation

"placing it upon record." [BLAN] 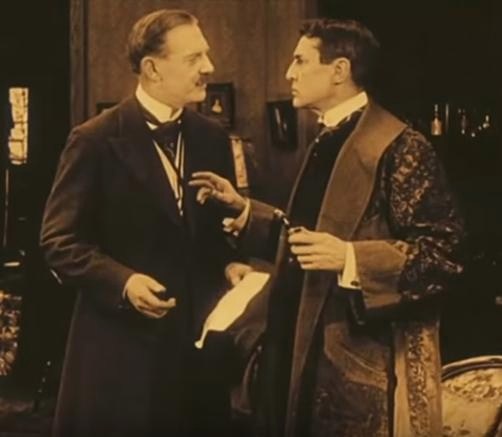 To anyone who has heard of Sherlock Holmes, “Elementary, my dear Watson” is always the quotation.

Sherlockians know that the phrase is not a Doylean original, but still we have placed it together with the deerstalker and the curved pipe on our sacred canonical mantelpiece. We definitely do feel an emotion akin to love for it. Conan Doyle used “elementary” a few times in the Sherlock Holmes stories, and “my dear Watson” many times. In “The Crooked Man” (1893) both of these components are included. But there are 52 words between them.

It is often stated that the line was first used in the American movie The Return of Sherlock Holmes from 1929. Sherlock Holmes was played by Clive Brook, and this was the first sound film about the detective. At the end of the movie Brook delivered the famous line.

Other sources—e.g., Christopher Redmond’s Quotations from Baker Street (2009)—point out a much earlier occurrence: Psmith, Journalist by P. G. Wodehouse, published as a book in 1915. The story had run as a serial in The Captain from October 1909 to March 1910. And it was in the February issue that Psmith murmured, “Elementary, my dear Watson, elementary.” No earlier occurrences have until now been known. But they do exist.

Half a year before the first installment of Wodehouse’s serial, the astronomer and Harvard professor Edward C. Pickering claimed that there was a way of signalling to the planet Mars. It all depended on correct positioning of mirrors that should reflect the sunlight. “Elementary mathematics,” as Pickering expressed it himself. Or as that statement was commented in an American news item: “‘Elementary, my dear Watson,’ as Sherlock Holmes was wont to say. ‘Elementary.’” (The Times Dispatch, 24 August 1909)

Wodehouse did not coin the classic words. Nor did that Richmond, Virginia, newspaper. On the contrary the line seems to have been commonly known—the wording in the Times Dispatch indicates that—and during the following years it appeared in a number of magazines and newspapers:

Always cited as a matter of course that this was Sherlock Holmes’s most famous line. And certainly with no knowledge that that was not so.

During the following years the line appeared in widely differing contexts in magazines like the British Sketch (1912), the American Everybody’s Magazine (1913), the American Western Electric News (1913) and The Journal of the American Medical Association (1914). Sometimes the line was used with a reference to Sherlock Holmes, but more and more it stood by itself, with no reference to the source at all. “Elementary, my dear Watson” had become a common phrase. The line could be used in connection with anything; it didn’t need to be about detectives.

In the Louisville Courier-Journal the following four-line funny story was published at the end of 1914:


“Does Wombat own or rent his house?”
“Rents it.”
“How do you know?”
“I know all right. He scratches matches on the paint.”

This had obviously nothing to do with Sherlock Holmes. But the headline for the four lines was nevertheless “Elementary, Watson”—since the story was about sharp wit, and such was best represented by Holmes’s most famous line. (In this case in a shorter version, since ”my dear” were cut.) And over the years also in travesty versions. The word ”elementary” was sometimes changed to other words that sounded similar to get a comical effect. And on 2 February 1920 The New-York Tribune wrote in a political commentary: “That is elementary, my dear Senator.” The origin in the Holmes quotation is evident, and the reader is expected to understand it.

During the ’20s the use of the phrase widespread. Agatha Christie included it in the Tommy and Tuppence novel The Secret Adversary:


“Good morning,” said Tommy amicably. “You have not used Pear’s soap, I see.”
Conrad growled threatingly.
“No light repartee, have you, old bean? There, there, we can’t always have brains as well as beauty. What have we for lunch? Stew? How did I know? Elementary, my dear Watson—the smell of onions is unmistakable.” 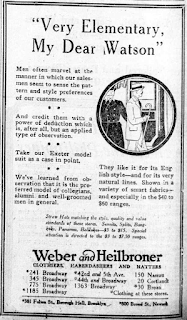 The line also worked in advertising. The picture shows an advert for suits, from The New-York Tribune 14 May 1921.

And it is in an ad that we can find the first published appearance of the line, even if it is in a slightly parodic form.

In the late fall of 1901 an advertisement for Charles Ford’s Bile Beans for Biliousness was published in many British newspapers (e.g., Northampton Mercury 15 November 1901). This alleged cure-all had been popular for more than ten years, and many thought it really worked. (Adverts for the medicine were often designed to look like editorial text—the only thing that revealed that it was an advert was the letters ADVT at the end of the text.) The ad had the headline “Sherlock Holmes’s Latest” and was written as a Sherlock Holmes parody. Here follows the beginning of the text:

One winter’s morning, a few years after my marriage, I was lying by my hearth, smoking a red herring, and nodding over the Encyclopedia Britannica, for my day’s work had been a hard one. Since first meeting Shylock Combs my practice as a doctor had, as a matter of course, rapidly declined. My presentation clock had chimed 4.47 a.m., and I was in the act of blowing out the gas when I heard the clang of my front door speaking tube. Thinking it must be the milkman I went into the hall, opened the door, and, to my astonishment, Shylock Combs stood upon my step. “Ah, Potson,” he said; “I hoped I should not be too early to catch you. I perceive the wind has changed round to N.N.E. by S.W. again.” I was astounded, as he had not had time to observe the thermometer in my bedroom. He noticed my amazement and smiled that wonderful smile of his. “Elementary, my dear Potson,” he said; “I observed the left-hand side of your moustache inclined about 47 5/8 degrees towards the west, and coming as I did from Butcher-street I at once deduced from which quarter the wind was blowing.”

Here we find, in 1901, the quotation “Elementary, my dear Potson,” an obvious parody on the classic line. But no smoke without fire, and no parody without something to parody. From where then did the quotation come? We can but speculate about this, since we don’t have any written evidence. I have neither any examples of appearances of the line between 1901 and 1909. It is however evident that the quotation spread in both Great Britain and the U.S., and on a wide front in widely differing contexts.

The origin of the quotation must be something that united the U.S. and Great Britain. And there was only one Holmes-related success that ranged over both continents. It wasn’t a book; it was nothing that had been written in the newspapers. It was William Gillette’s 1899 play Sherlock Holmes. It had been playing London in 1901. And that makes it no mystery that a quotation from the popular play was used in a British advertisement the same year—the play had by then been seen by a great many Englishmen.

With the continued concurrent performances and tours of the play in the U.S. and in Europe during the first decades of the 20th century, it influenced people’s idea of Sherlock Holmes. To many theatergoers the master detective in the play became more real than the canonical Holmes. The deerstalker and curved pipe came to be connected with Holmes largely thanks to the play. Professor Moriarty had previously only figured in one single short story, but here he was established as the Napoleon of crime. And it is not unlikely that the famous quotation was born there.

And even if the line was never actually uttered in the play, the audiences might very well have collectively mixed together those two phrases into one and thought that they had heard “elementary, my dear Watson.” In all probability it was through the spoken line that the phrase was coined, and it happened thanks to William Gillette. Conan Doyle had created Sherlock Holmes as a character, but there is no doubt that it was Gillette’s success that turned the master detective into one of the world’s most famous and recognizable symbols.

Author's note: I wrote this some time ago, wanting to elaborate on some facts I mention in my book From Holmes to Sherlock (published in Swedish in 2013), and I thought it fitting to post my findings in connection with the forthcoming English edition in 2017. However, since Quote Investigator posted a similar article a few weeks ago – based on pretty much the same sources – I see no reason to wait any longer with sharing these observations.

Editor's note: In addition to the English edition of From Holmes to Sherlock, Mattias is also the co-editor (with Matt Laffey) of Sherlock Holmes and Conan Doyle in the Newspapers, a multi-volume project under the banner of Wessex Press.