The Lying Detective — It Is What It Is 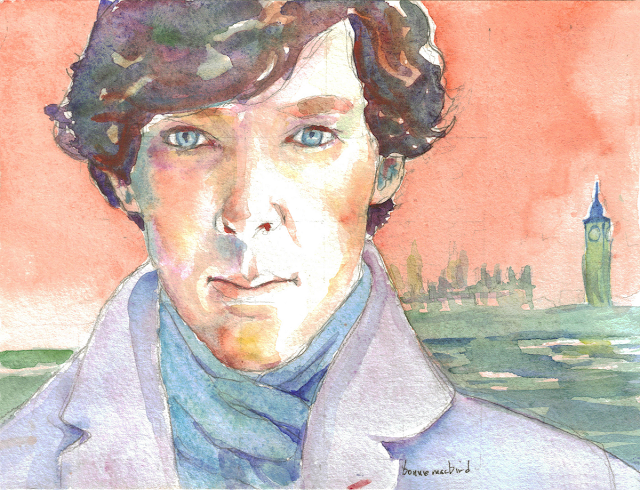 [Editor's Note: this is the sixth in a series of reviews we'll be sharing on Series 4 of Sherlock. And as is our custom, there are spoilers ahead.]

And I love what it is. That sums up Sherlock for me.

Before I begin, I respect your right to “not like” some creative work. That’s your prerogative and criticism is the risk that any creative person takes when putting their work out.

But if you happen to be one of the vocal types hurling vitriol about Sherlock, exclaiming how violated and disappointed you are, may I offer some thoughts to consider.

As many of you know, I love Sherlock for exactly what it is — a very creative riff on canon, written and performed by some immensely talented guys.

I will never tire of watching the innately likable Martin Freeman as John Watson struggle with his decency, his desire to be a good man, his  bravery,  his addiction to adrenaline, and his very debilitating PTSD — not to mention the love he feels for his friend. Which is from time to time tried to the limits due to his own, and especially to Sherlock’s flaws.

Many found John to have crossed some line in "The Lying Detective" in a supposed affair and his attack on Sherlock.

I was very sympathetic to John’s struggle with his attraction to the girl on the bus. So very human, so very poignant. An army surgeon married with a baby and craving adrenalin… well, of course. My heart ached for him watching this.

John is a man who examines his actions regularly. And suffers tremendous guilt for his mistakes.  To me that is human and heroic.

There is, by the way, canonical inspiration to be found in the way Watson describes women with more than a touch of longing.  And of course, a parallel exists with ACD who enjoyed many social occasions with Jeanne Leckie while still married to the ailing Touie.   A human being, yet still worthy of our admiration.

Would Dr. John Watson of the original Sherlock Holmes stories have had an affair? Not likely. But would he — if he were alive now — perhaps flirt a bit via text? I buy it. Three continents, folks. He didn't do more than text. That showed restraint. I love him for it.

Are you so above such a thought, such a desire, such a gesture? If so, I do not find the world so black and white as you do.

Bigger question: would John Watson beat the up an ailing canonical Holmes? That set off some of you. Not in the Canon, surely. But Sherlock  ratchets up both the rawness of these characters’ emotions and the extremity of Sherlock’s hubris and John’s PTSD to a point that, to me, became  believable and tragic and moving. It brought me to tears. I could understand both points of view so well. Yes, both.

Those characters, those vulnerabilities, have been carefully constructed, consistently built throughout the series. It’s not the Canon, it’s a version of these characters which is consistent within the longer arc of the Sherlock series.

And Sherlock himself. Like his canonical counterpart, this Sherlock is damaged goods with a fragile and inflated ego (it’s all in the stories), manic behavior and the propensity to self medicate to alleviate depression and boredom. Except — Sherlock goes farther than the canonical Holmes. Much, much farther, and suffers all the more from it. Again, I feel sympathy, not derision.  He is an extreme man living in extreme times.

I will never tire of watching Benedict Cumberbatch play the genius of immense intellect and emotion – and yes, Mrs. Hudson was dead on right about this – for all his reasoned brilliance and passion for the scientific method, Sherlock is primarily an emotional man, and I hold him to be so in the Canon as well. Though in the spirit of the Victorian era, this element is very much understated on the page.  But it peeks through the words, most definitely.

In both Sir Arthur Conan Doyle's original stories and Sherlock this character is hurting, alone, somewhat of a tragic figure, and all the more heroic for it. The world applauds his achievements while he privately collapses.

In the show, for John and Sherlock, bad stuff happens when their lesser natures briefly overcome them. To me, that is the stuff of powerful storytelling.

I think some haters, particularly those who have only recently switched sides to Camp Vitriol where
Sherlock is concerned, come to the show with expectations — expectations that it cleave more closely to the Canon, that it show John and Sherlock as very much who Watson and Holmes were in the original stories, that it mimic the Conan Doyle formula they think they remember (and are almost always wrong) concerning the amount of deductions, how accurate was the logic, how active/ inactive, physical/emotional, etc.

Several problems come with that expectation.

First, many get these breakdowns, percentages, perceptions wrong (though granted, fewer of you who are reading IHOSE). I love Gatiss’s recent rhyming rebuttal to “there’s too much action” in Sherlock.  Hell, no, it's quite canonical. Just depicted in the style of its current medium.

Second: recreating the Canon is not what the creators set out to do, or ever promised. This is a riff, not an adaptation. A pastiche, not a faithful retelling. They are creative, imaginative, inspired, and did what they wanted to do. Why is so much ego ascribed to their work by the haters? They are artists.   This is their portrait.

I went into an exhibit of Expressionist painting recently in London. I don’t much care for this genre; it does not speak to me. My companion was riveted and spent an hour and a half studying these while I did a quick tour and sat down to write. She had a fascinating takeaway and couldn’t wait to try some things in her own painting. I was unimpressed but I can assure you that I did not find myself thinking – what an utter a^*hole for using that much yellow in the corner of the painting, how is that a bridge, and how dare he call that f%^-ing  blob a human being?

No. This painting is that artist’s take. We can partake, admire, savor, or move on to what we like better.

I will never paint in this style. I don’t hate or deride these artists for doing so.

To punitively ascribe "ego" to an artist for daring to disagree with you by virtue of their choices is just plain wrong. The act of writing, performing, any art form requires ego, requires a point of view, and requires the creator  to reveal him/herself by  appearing on the page or canvas or screen. The work itself  also has a form – to a greater or lesser degree – imposed upon it. That’s the challenge of art.

Putting out your "take" on an idea, an image, a story — that is what artists do, and it is the height of vulnerability. Many of you know this. You put your work out there and then stand naked before the crowd.

All creative art forms have rules and guidelines. Some tight, some loose. A classical sonnet is a tight form, an expressionist painting a loose one, but both are forms. As you put yourself and your ideas and your story and what it is you want to say into this form, you also help define the form. And you speak your piece. It's a leap of faith to do this. That’s not ego, that’s what creating is.

I frankly love Sherlock though not every minute of it. Sometimes there is a little too much yellow in the corner of the painting: dialogue too fast, and less inventive villains than I’d like. But do I need to write angrily about this, detailing with outrage what they woulda, shoulda, coulda done?

I’ve been a screenwriter and a producer and a development executive for 30 years in Hollywood. I have written one movie that’s been made and sold many scripts and won Emmys for TV writing.  I am published in longform print Holmes. (Art in the Blood, and the upcoming Unquiet Spirits)  So maybe I’m somewhat “qualified” as a critic, but I will not take the bait and second guess Moffatt and Gatiss and Cumberbatch and Freeman.

This is an artwork.  And I have too much respect.

Let me reiterate: you don’t have to like any given artwork, I’m not saying that. But don’t be like that nurse in "The Lying Detective," casually dissing John’s blog in passing, almost as an afterthought. Maybe she glanced at it on the Tube. Maybe she would have written it differently. Please. Don't be that woman.

A final word on the phrase “it is what it is ” which tags this episode.This was derided as a platitude by some critics.

This is not a platitude. “Everything happens for a reason”is a platitude. Say that to me and don't stand too close.

"It is what it is" …is zen.  It is the hard won lesson of the adult. It is the serenity prayer, the part about  knowing what “things you cannot change” and understanding and accepting those things.

Mary is dead. Sherlock and John are flawed human beings. Horrible people who kill others exist. It is what it is. Sadly. But it is.

Now, that being said, the other part of the serenity prayer about knowing the difference between what you can and cannot change is crucial. At this precise moment there is a rising panic about what is happening in our country, a malaise that is difficult to endure. We are hoping and praying that "what it is" can be changed.

Some things  require action. They require battle gear and courage and resilience. Despots and liars must be confronted. Murders must be investigated. Criminals brought to justice. Children must be taught. Babies must be nurtured. Art must be created to shine lights into dark corners and open us to beauty and truth. This is hard, scary work.

When friends join hands and agree on these painful things, there is love. And understanding. I love these two men, this particular John and Sherlock, and their expression in this crazy form in our crazy times.  I can’t wait for "The Final Problem."


Editor's Note: Bonnie MacBird recently received her investiture "Art in the Blood" in the Baker Street Irregulars. The watercolor portrait above is her work.