Review: The Remedy by Thomas Goetz

"“It was consumption of the most virulent kind"” [MISS] 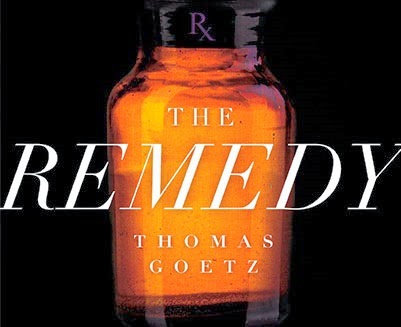 It has all the trappings of a Holmes classic: a disease that was killing off thousands of people throughout the ages; a doctor working hard to find a miracle cure; and a man on the threshold of making a major career decision. You would not be too surprised if you discovered a lost Conan Doyle manuscript with such a premise.

Thomas Goetz's The Remedy: Robert Koch, Arthur Conan Doyle and the Quest to Cure Tuberculosis is (Amazon US | Amazon UK) such a book....and what makes it remarkable is that not only does Conan Doyle feature in the narrative, but serves as a gripping "history" of deductive sciences in medicine...and ultimately, in the factors that shaped the development of Sherlock Holmes.

Placing itself in a distinct narrative context, The Remedy outlines Dr. Robert Koch's efforts to find a cure for tuberculosis, which had a very high mortality rate. Goetz not only describes Koch's work in detail, but also details how researchers using the scientific method came across what is now known as "germ theory." With an eye towards Holmes scholarship, Goetz also provides a strong backdrop into how the more scientifically-oriented tenor of pre-Victorian times influenced Conan Doyle's approach towards Holmes' methodology. (Consider it "the science of crime", if you will...but even that is unnecessarily limiting to Goetz's approach).

But the revelations come towards the end of the book, when Conan Doyle becomes a player in the search for a cure for tuberculosis. As Conan Doyle makes his way towards Germany to learn details, we find that...well, that would be spoiling the ending, wouldn't it? But The Remedy deftly combines a strong narrative with a great overview of the rapid development of science and medicine, making it a very strong read for both Holmesians and those with an interest in the history of medicine.

But for those with an interest in scholarship, Thomas Goetz's The Remedy provides us with a portrait of the author in transition - during this time, Conan Doyle shifted away from medicine and into writing. The Remedy provides some context for this transition, but most importantly, it balances a strong historical narrative with a precise insight into how various factors converged into a unified approach.

In short, The Remedy is a definite must-read, making a solid link between advances in medical science, one man's quest to find a cure for a devastating disease....and Conan Doyle developing Sherlock Holmes' character.

Note: a complimentary electronic copy was provided for review.