"Man ... has lost all enterprise and originality." [COPP] 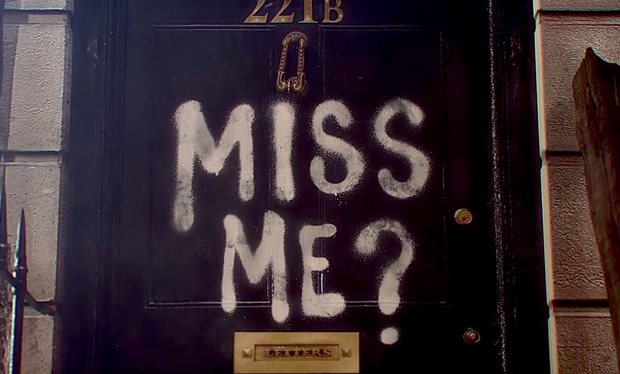 [Editor's Note: this is the tenth in our series of reviews of Sherlock Series 4. Spoilers...yada yada yada...spoilers.]

When the very first episode of Sherlock aired, I was beside myself with excitement. It was awesome. The whole first season had me hooked. I told my friends well in advance I would not be available for anything when the second season was announced, and I devoured the third, though with perhaps less relish than the others. I have always been ready and willing to forgive the writers of Sherlock for a lot of flaws, primarily because the chemistry between the leads and the acting of everyone involved is superb.

And now, at the end of season four, I find myself curiously neutral as to whether or not a season five happens. Though each of the previous episodes had their good moments, I was not what you could describe as a fan of either. Frankly, “The Lying Detective” just made me angry by the end (you can read that review/rant here.) “The Final Problem,” by contrast, left me apathetic. I’m glad it worked out, in its way. I’m glad the boys are back in Baker Street of course, and it was a lovely little end montage that I wanted really hard to be satisfied with, but I was too numb by then to care much. Not even numb; numb indicates a sensation of not-feeling. This was just nothing.

The episode started with such great promise. Mycroft Holmes watches noir films, enough to have memorized the dialogue. Sherlock scares the hell out of him just to make a point, and John has recovered from being shot with a tranquilizer (sure, I’ll buy it). The banter was back, and it was such a refreshing return to the atmosphere of previous seasons.

Some people have complained about Sherlock becoming James Bond in the show, and while I think there’s recently been an overemphasis on action, this episode made me realize why sometimes it works and sometimes it doesn’t: It’s the dialogue. The massive CGI explosion of 221B didn't bother me at all, because of the banter before it. There were deductions, all three characters had a chance to make a contribution to the scene, it was funny and a touch tender, and you knew what was coming. It still fit in the atmosphere of the scene.

"the effect of the atmosphere" [DEVI]

Atmosphere is part of the problem with the rest of the episode. Eurus is psychopathic, but her puzzles provide no suspense (except the possibility of Mycroft dying), because it’s obvious that Sherlock and John are going to get out somehow. It’s made clear right away that there is no way to win her game.

The episode plays like it was made by someone who once saw a Hitchcock film and thought it wasn’t gritty enough. There's no dramatic pacing, just one room after another, watching characters suffer emotional turmoil. Molly Hooper is once again nothing but bait, a chance to make Sherlock feel really bad about himself. Lestrade shows up for… continuity? He doesn’t actually do anything, there’s no reason for him to be there in that last minute of the episode, he’s just a face we recognize. Mycroft actually has some good moments, becoming more human in this episode than ever, but even he gets shoved away at the end, trapped in a cell off-camera so Sherlock can have the anticlimactic climax to himself.

The final problem was, ultimately, boring.

Maybe it’s because Eurus seemed just an imitation Moriarty - all the psychosis, none of the charm. We’re supposed to feel sorry for her, the crazy girl left all alone with nobody to love her, her family frightened of her etc., but I just couldn’t. There was no room for me to care about the characters anymore. Sherlock and John went through hell already this season, Eurus was beating a dead horse trying to torture them.

The revelations about Mycroft’s character are what kept my interest going. He locks away his sister, taking it upon himself to decide whether or not she is worth saving, because that’s his version of being kind. Kindness through overprotection and cruelty seems to be the only way he can interact with humans. He can order a hit on a subject in another country, but ask him to get his own hands dirty and he can’t do it. For all his talk of being logical, emotionless, and clever, he’s really just a softie willing to grant his psychotic sister the company of an equally psychotic criminal mastermind for five minutes unsupervised, because it will make her happy. The man’s an idiot, but an occasionally useful one, and one who is devoted to his family, in his own warped way. I enjoyed the performance, especially the scene where he prepares to die, and I was sorely disappointed to see him left offscreen for the ending.

Sherlock ultimately decides to do what Mycroft couldn’t, and tries to save his sister. What should have been a touching and hopeful ending montage was subdued by the sheer lack of emotional commitment I had for the rest of the episode. I hope more episodes are made, I hope Rosie grows up to be precocious and a delightful terror, I hope Molly and Sherlock come to some sort of reconciliation, and I hope the Holmes family keep visiting Eurus, but most of all, I hope there are more adventures that don’t involve evil geniuses.

No, Jim, not really. After this season, I’d really like to see the boys of Baker Street go find a missing horse.