"It is, of course, a trifle, but there is nothing so important as trifles." [TWIS] 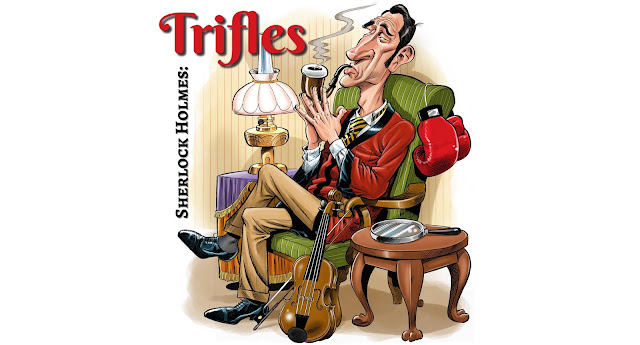 After a number of months in development, planning and production, our new show is finally here.

IHOSE Media, LLC (aka Scott and Burt) have launched a new podcast: Trifles. You can find it via the preceding link or by typing sherlockholmespodcast.com into your browser — catchy URL, eh?

(Bit of a backstory: you may be wondering how such a dead-on URL might still be available in 2017. Well, the truth is, we secured that URL back when we first launched I Hear of Sherlock Everywhere, which itself is accessible via ihearofsherlock.com and ihearofsherlockeverywhere.com. We thought we would keep it handy for...for just such an emergency.)


"I fancy that this ally breaks fresh ground" [STUD]

We heard from some early iTunes reviewers who were disappointed that we didn't talk more about the original stories (despite what our introduction professes). But we were at our wits' ends trying to make some of the discussion points about the stories the same length as our other shows — and length was becoming an issue with those. Only the most dedicated fans would stick with us for an hour or more (thank you!). And to be clear, IHOSE will continue on its twice-a-month broadcast schedule.

But the idea here is simple: create a shorter, more Canonical program that is more accessible to the general listener. We may revisit some classics of Sherlockian scholarship, or break new ground with observations of our own. But it will all be based on the Sherlock Holmes stories.

Here's a sample to get you started —  our first episode:

"its atmosphere brings me inspiration" [VALL]

The name of the show was inspired by Bill Hyder, BSI ("A Most Valuable Institution")'s annual inserts in the BSI dinner packets. Each year, Bill includes a blue half-page titled "TRIFLES" with some thought-starter from the stories. But other inserts, such as "Compliments of the Season" from Peter Blau, BSI ("Black Peter"), "Crowborough Occasionals" from Steve Rothman ("The Valley of Fear") and various "Daypark Press Publications" from Leslie S. Klinger ("The Abbey Grange") also lend themselves as sources of material.

Works like this are a team effort, and without the advice, guidance and generosity of a few individuals, Trifles would not have come to fruition.

Tom Richmond, whom you may remember from Episode 65 of IHOSE as a talented artist with Sherlockian leanings (not to mention being one of the Usual Gang of Suspects for MAD Magazine), provided our artwork.

John Rabe, son of the late Wilmer T. ("Bill") Rabe, BSI ("Colonel Warburton's Madness"), host of KPCC's "Off Ramp," and faithful supporter of IHOSE, provided direction for the intro and outro of each episode.

And Ludwig van Beethoven, as expressed through the U.S. Marine Chamber Orchestra, is responsible for our theme music.

We'd urge you to sign up for updates from Trifles. As is our habit, we offer a number of options: you can sign up for email updates and subscribe via iTunes and Google Play. It works on any device, so you can listen at your desktop, or take it with you for your walk, gardening, or commute on your phone or mp3 player.

The show will air every Wednesday.

If you have an idea for a discussion topic, please feel free to let us know by emailing us at trifles@ihearofsherlock.com.


"you'll excuse my troubling you about such a trifle" [HOUN]

And if you could help us out by leaving a rating and/or a review on iTunes, we'd greatly appreciate it. Doing so will help other people discover the magical world of Sherlock Holmes, Dr. Watson, and Sir Arthur Conan Doyle.

As you can tell, we're pretty excited about this. We hope that you share our passion and demonstrate it by passing this message along. Forward it as an email, share it on Facebook, tweet it, put it on reddit, send a telegram, text or smoke signals — we know the power of the Sherlockian network is strong. Please help us reach new an interested Sherlockians-in-waiting.