"for the fourth time" [BRUC] 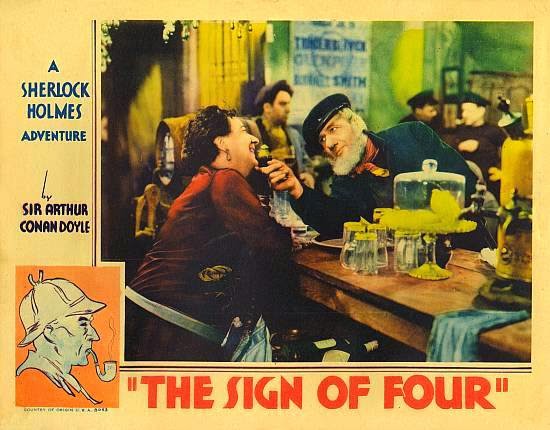 [Editor's note: this is the fourth in a series of four posts on the Arthur Wontner Sherlock Holmes series, as reviewed by David Lee Andrews of Comic Book and Movie Reviews]


After closer inspection I've deduced that the following 75 minute movie made in 1932 was directed by Graham Cutts; and starred Arthur Wontner, Isla Bevan, with Ian Hunter. And how did I know such a thing? Well, I purchased a copy and watched it of course. And so should you, too.

Now calm down, Ms. Morstan (Isla Bevan). Please. There's no need for you to cry anymore. You're safe now, and completely out of harm's way. Although I wish I could have said exactly the same thing about some of your relatives.

Well, quite time ago your father partnered up with a Major from the British army called Sholto (Herbert Lomas), so they could both steal a box of treasure from a known felon named Small (Graham Soutten). However, during this arduous encounter Sholto murdered your father in cold blood and spent the reminder of his days over here in London.

Yet, the strange thing about this, my dear, is that as the years passed by he eventually came to the realization that his life of luxury was built on very fragile ground. And so, when it finally came time for Sholto to take his final breath, he told his two sons about what he had done, and they in turn hastily decided to send you some of his loot - in the form of a diamond necklace - for fear of Small''s return.

Of course, Small did return, didn't he? And that's why you're here to see me today. Indeed, earlier one of his tattooed henchmen approached you at your florist's.

But please, don't concern yourself, Ms. Morstan. I will now leave you in Doctor Watson's (Ian Hunter) more than capable hands, because what next transpires all begins anew when I say to myself those immortal words, "Come Sherlock (Arthur Wontner). The game is afoot." As an inept policeman makes a wrong arrest - a drunken Sherlock becomes a damn right pest - Watson and Mary take a trip to the fun-fair - and at the end of the day, a kiss from a fair lady, spells that love is in the air. 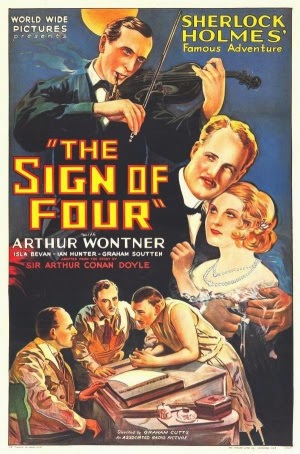 I'm afraid to say that this will be my last Arthur Wontner Sherlock Holmes movie review because there aren't any more for me to see. It's a shame really, isn't it? Because on the whole most of them conveyed somewhat intriguing story lines that lavished us with pathos, mystery, plus an authentic vibe spearheaded by Arthur's portrayal of the Sherlock Holmes character.

Take this film for instance. In it, you will see him doing everything Holmes does in the books. You will see him poking fun at Watson and the police without a care in the world. You will hear him making one of his many articulate yet engrossing summations that'll make anyone think, "Wow!" And you'll even see him in disguise mixing in with the locals.

But having said that, dear reader, do you know what impressed me the most about this mystery? It was that the camera work on show was very innovative for its time. Every now and then a scene was shot from a high perspective looking down to give it a sinister edge. Other times the film was sped-up to give it a more kinetic flow. And here and there you could see Holmes - or one of the other characters - through an object which was placed in the foreground, as if to give this scene a more artistic flourish!

Also, something else I best mention about this movie was how Doctor Watson kept flirting with the Mary Morstan character. Honestly, my friends. When I saw what he was doing I couldn't help but cheer him on and applaud his more debonair antics. And without giving anything away, at the very end of it a friendship was sealed in a very 'to be continued' sort of manner.

Now on the flip side of things there were two aspects about this adventure I wasn't too keen on. Firstly, on occasion the sound quality was rather mumbled in note, and difficult for me to hear what was being said. And secondly, I had to wait for over twenty minutes before I could see Sherlock in front of the camera.

Apart from that though -- hey! -- this was one marvelous movie. And these are its cinematic facts.

Overall I'd say The Sign Of Four was a great way for me to end my reviews on the Arthur Wontner series of Sherlock Holmes films. It had a great story line that was dynamic in places and authentic in attitude. And if you can look past some of its cosmetic flaws, all in all this is a must watch movie for any of you Sherlockian cinephiles out there