"I was sure you would pick up the trail" [VEIL] 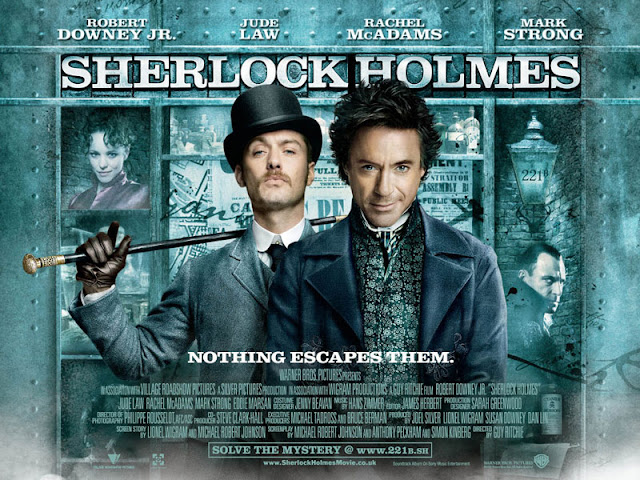 Every generation has its definitive Sherlock Holmes on stage or screen. In the early 1900s it was William Gillette; the 1920s brought us Eille Norwood; the '40s was Basil Rathbone

As Sherlockians, our interest has been constant for the past 75 years or so (let's recall that the Baker Street Journal has now been published for some six decades), but to the general public, there have been times when interest waned. The late 1960s was one time, as was the early 1980s. In the first instance, we saw vast public interest in Sherlock Holmes resurrected thanks to Nicholas Meyer, BSI ("A Fine Morocco Case") and his novel/screenplay The Seven-Per-Cent Solution

And here we stand, late in the first decade of 2000. Jeremy Brett has been gone for some 15 years, and while there have been no lack of novels, serious scholarship or one-off small screen productions, nothing has yet captivated the collective mind.

Today, we bring you the first of two things that we believe will bring a renaissance to the Sherlock Holmes movement.

Coming this Christmas is the long-awaited film by Guy Ritchie, Sherlock Holmes. While the casting of Robert Downey, Jr. has brought "a chorus of groans, cries, and bleatings" from the purists, there are some who are waiting to pass final judgment until the movie is released.

Here is the world premiere of the official trailer for the new movie (via First Showing).

Personally, we think the trailer looks damn good. We'd be interested to hear your opinions - in the comment section below.

P.S. We listened to the trailer on these - it was phenomenal.

It looks awesome, and I agree. I too, presume this will cause a rise in the Holmes sales market! ;-)

It looks like it might be a corking good film, but I have to say I have never seen a more unkempt Holmes. The last scene in the trailer, and the droll way he delivers that line, is hilarious.

After an incredibly frustrating Mets' game this was a pure delight that saved my evening. Robert Downey JR is a great actor but I still don't see him as Holmes. And he didn't always sound like he had the accent right. Plus I never saw Holmes as shorter than Watson. That said Jude Law makes a fine Dr. W. Until I see the actual film it still looks like Watson & Charlie Chaplin. As to the trailer itself it's quite amazing & has me looking forward to seeing the film. However keep in mind that if you can't get 2 and a half decent minutes out of a full length film in which to dazzle us then something is terribly wrong. Keeping my fingers crossed, a heartfelt thank you & a tip of the deerstalker to Monty for sharing this preview with us.

I'm sorry, seeing a barely dressed Irene and an even lesser dressed Holmes does not inspire my confidence. But I'll see it anyway to make my decision then.

From the dialog snippets, I was reminded of Roger Moore in his James Bond role.

It should be fun, for all who wish to rave as well as those who will rant.

From the trailer only (which admittedly doesn't do a film justice) I would give it a 3.5/5.0.

Far too much action and the whole shirtless boxing bit screams "mindless box office sales" to me.

I don't think I can bring myself to see this film. From the trailer it appears to be an absolute abomination.

I think it looks really entertaining. It's not Holmes as we've come to expect, but more "Holmes, Sherlock Holmes" (I too saw the hint of 007). I'll be going to see it, without a doubt.

I predict: Downey will do for Holmes what Michael Keaton did for Batman. Keaton also was vilified in advance of that film's release, and the film and performance sold us all, and sold us big time. Sherlockians have a set of much holier trappings, but nonetheless have managed to put up with excursions starring a wide range of guys, from George C. Scott (also American) to Christopher Plummer (Canadian) to Nicol Williamson and Michael Caine (both of them the most un-Sherlockian of Sherlocks), and put their mark of acceptance on the efforts. Again, I predict that, a year from now, we'll all be buying the Downey-Law DVD and showing it happily to our pals. Then, of course, to ground ourselves, we'll watch a DVD of one of the Rathbone films and pretend that it doesn't depart from the Canonical Holmes as much as this new movie is likely to.

Definitely will see it.
Sherlock is a great character and it if takes some action/adventure to introduce him to a new generation then so be it.

I've always been fascinated by the hints of Holmes' physical prowess and think it's a fine way to explore it.

There are only so many ways to film the original stories and after Jeremy Brett it's foolish to try.

I hope the movie succeeds and is fun and good.

Thanks Henry, it looks like fun, and even if it isn't it will give us lots to chat about and interest from lots of new devotees. IMHO any time someone puts SH in the middle of popular culture it is a good thing and eventually brings new players to The Game.