"I know where the letters are without looking" [IDEN] 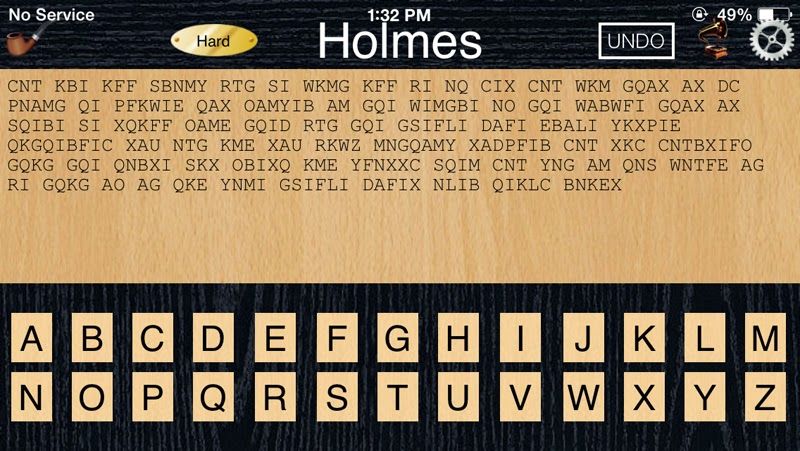 If the message on the screen of your phone starts out CNT KBI KFF SBNMY RTG SI WKMG, you might guess that it's a cipher. You might even guess that KFF represented either TOO or ALL, although ODD and EBB are among the possibilities. Getting that one word right would give you a couple of common letters, and then you could start working out other possibilities, very much the way Sherlock Holmes does in "The Dancing Men".

You can do such a puzzle on an app. Holmes Cryptic Cipher is a code puzzle game and it's available for your Android or iOS device. You tackle the cipher by sliding one letter onto another on a control panel at the bottom of the screen. Try moving F onto L, for example, and K onto A, and gradually words start taking shape. Trial and error is the key, and there's an Undo button. 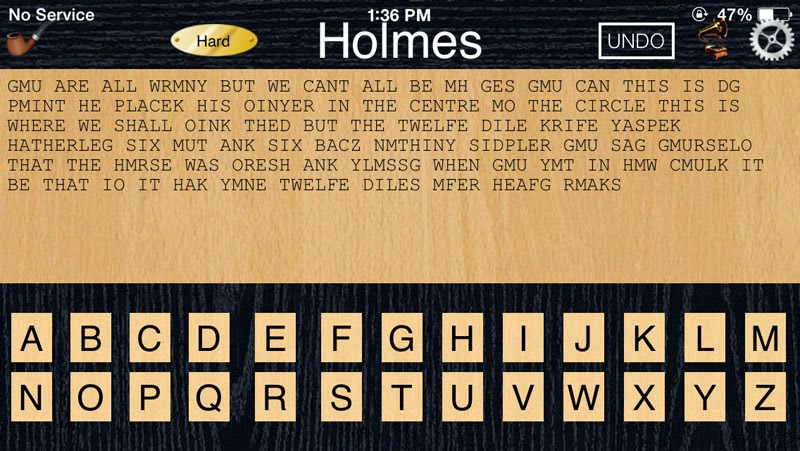 I can claim to have mastered three of the four levels of difficulty to the point that I can solve a puzzle in five minutes or less. I haven't tried the "Expert" level yet. The first levels are available in a free version of the game, with the higher levels costing a token amount.

When you finally solve a puzzle you'll find that you have a brief passage from The Adventures of Sherlock Holmes. In this case the first four words turn out to be YOU ARE ALL WRONG, the beginning of a passage from "The Engineer's Thumb". Those twelve stories add up to almost 100,000 words, so the number of short passages suitable for the purpose is pretty high. 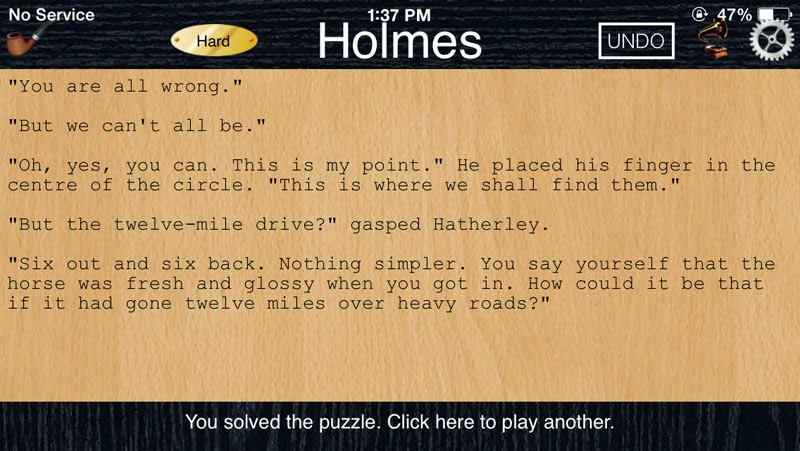 "I came up with the idea and built a prototype about 10 years ago and then promptly forgot about it," says Gilan Israel, one of the two programmers, now based in Jerusalem, who make up Beace Games. He's originally from Vancouver.

"After attending a Global Game Jam together in January 2015," says Israel, "my neighbour Bill Burdick (originally from Chicago) worked evenings and weekends with me for about a month to turn that old idea into a published game. This is the first time either of us has published a game.

"We are currently working on some improvements including adding scoring, hints and competitive play through social sites like Facebook. We're also working on a similar game using texts from the King James Version of the Bible."