Rare First Edition of The Speckled Band at Auction

"Now and again I drive down to Sotheby's" [3GAR] 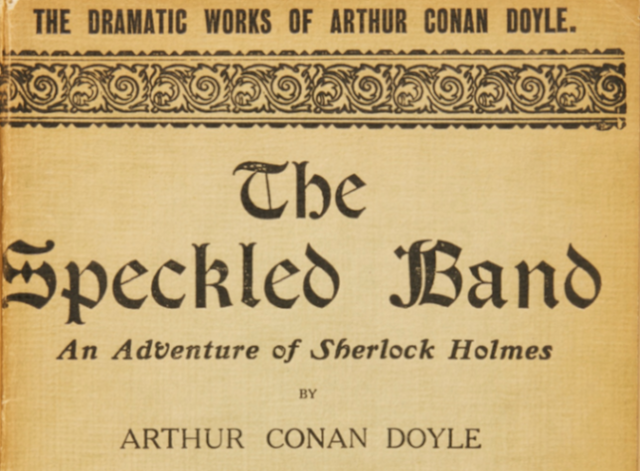 A rare item from the world of Sherlock Holmes will be up for auction. Sotheby's is offering a chance to own a first edition of the play "The Speckled Band," written by Sir Arthur Conan Doyle.

The English Literature, History, Children's Books and Illustrations auction is set for July 12, 2016 in London. Lot 153 is a first edition of "The Speckled Band," written in December 1909 and based on the story of the same name, which was originally published in 1892. The estimate is £5,000-7,000.

According to Green and Gibson,


"[Doyle] took a six-month lease on the Adelphi Theatre so that The House of Temperley might be produced. The death of the King and a serious slump in audience attendance, coupled with the subject which was not thought suitable for women, meant that the run was short. 'When I saw the course that things were taking I shut myself up and devoted my whole mind to making a sensational Sherlock Holmes drama. I wrote it in a week and called it The Speckled Band after the short story of that name. I do not think that I exaggerate if I say that within a fortnight of the one play shutting down I had a company working upon the rehearsals of a second one, which had been written in the interval' (Memories and Adventures, p. 101). The new play was a great success. It opened at the Adelphi on 4 June 1910 and was transferred to the Globe on 8 August. It ran, in all, for 169 performances." (Green and Gibson, pp. 163-164).

The play enjoyed a successful tour in England, with two touring-companies on the road by the end of August. The actor who portrayed Sherlock Holmes in England was H.A. Saintsbury, who enjoyed Claude King as his Dr. Watson. Lyn Harding was cast at Dr. Rylott [sic] (a variation on the original Dr. Roylott). You may recall Harding as Professor Moriarty in the Arthur Wontner films.

After the success of the play, it was committed to print. According to Green and Gibson, there were four impressions of "The Speckled Band" — the first issue on thick paper, published August 1912, the text block measuring 184 x 120 mm.; the title-page with [left of a vertical rule] "New York / Samuel French / Publisher / 28-30 West 38th Street" and to the right of a vertical rule "London / Samuel French, Ltd / 26, Southampton Street / Strand"; at the foot of p.124 under a rule "Printed by Butler & Tanner, Frome and London."; and pp.125-126 consist of publisher's advertisements for the plays of Alfred Sutro, etc.

The second impression conforms textually with the first but is printed on thinner paper.

The third and fourth impressions are quite different — the text block measures 183 x 123 mm.; the title-page has the New York and London addresses reversed with the London address now being to the left of the vertical line and the New York address being to the right. The "London" address now has the addition of ",WC2"; the imprint (previously at the foot of p.124 under a rule "Printed by Butler & Tanner, Frome and London.") has now moved to the foot of p. 4 and reads "Made and Printed in Great Britain by Butler & Tanner Ltd., Frome and London"; and the publisher's advertisements pp.[125-126] "The Plays of Alfred Sutro" have now been replaced with publisher's advertisements for Sherlock Holmes, and the plays of Gertrude E. Jennings. 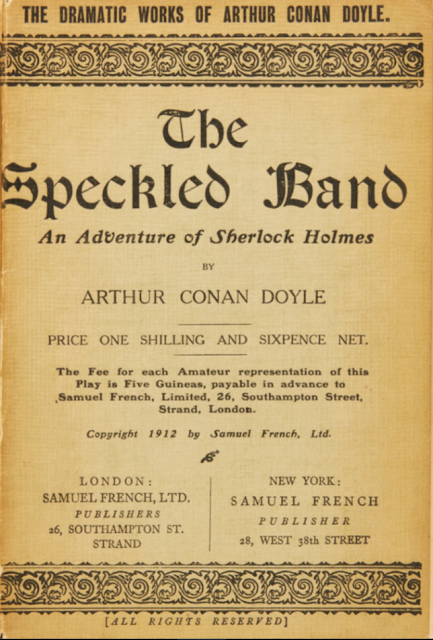 According to the description on Sotheby's, the book (image above) is described as follows:


Further note: the image of the item is severely cropped and no picture of the spine or rear cover is shown.


More information on the variants of the publication can be found on the David Brass Rare Books site.