"Through the haze" [HOUN] 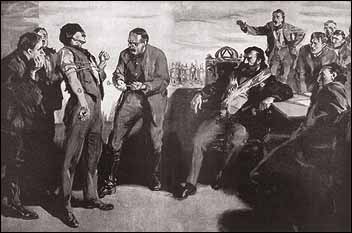 Never say never about what Sherlockians might do or have already done, but so far as I know, the new society in the coal valleys of Pennsylvania, which held its first meeting recently, is the only one that has ever staged a reenactment of the Scowrers initiation from The Valley of Fear as a means of inducting new members. I wasn't there, and of course haven't passed through the necessary ordeals myself, so I don't know whether branding irons were involved. However, photos have appeared publicly demonstrating that there were blindfolds, and presumably ritual questions and answers (not the ones familiar to the Musgrave family).

When Jack McMurdo was admitted to the original Lodge 341, Vermissa, he was already a member of the Ancient Order of Freemen and had passed through whatever tests the more respectable Lodge 29, Chicago, required. The Bodymaster's requirements at Vermissa were extra. Both experiences can be seen as examples of what would now be called hazing, which has two general purposes: to ensure that someone is fit to be part of an organization and know its secrets, and to make the newcomer temporarily uncomfortable for the amusement of those already on the inside.
When Arthur Conan Doyle wrote the Vermissa scene (Part II, Chapter III of The Valley of Fear) in 1914, he surely was remembering his own experience of being initiated into Phoenix Lodge 257 of the Freemasons in Southsea in 1887. He was not of course branded or threatened with sharp points to the eyes, but the essence of the experience, being a novice and the center of attention while not knowing what's about to happen, must have informed his description of McMurdo's welcome at Vermissa many years later.

Freemasons in the Canon

The Freemasons, or simply Masons, figure several times in the Canon; much has been written about Jabez Wilson's "arc-and-compass breastpin," John Hector McFarlane's "watch-charm," and so on. Neither the secrets nor the activities of Freemasons figure in the stories in any substantial way — that was left for the scriptwriters of Murder by Decree in 1979. When Holmes says in "A Scandal in Bohemia" that "There is a wonderful sympathy and freemasonry among horsy men," he is using the word in a very loose sense, and his initiation into that freemasonry seems to have involved nothing more than "[lending] the ostlers a hand in rubbing down their horses". 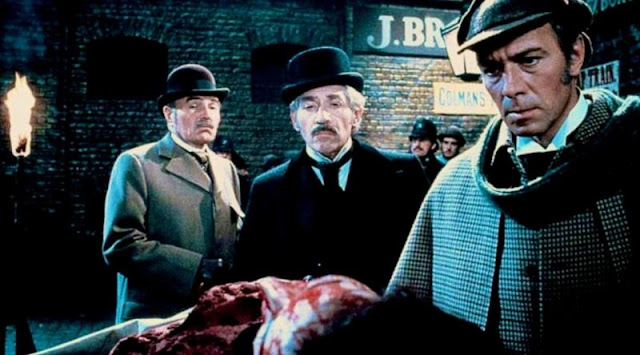 Secret Societies, or Societies with Secrets?

Everything about Masonic secrets is a sensitive subject. Doubly sensitive is the question of how far Masonic ritual influenced the ceremonies of Mormonism when they were being developed, mostly in Ohio in the 1830s, some forty years before the events narrated in the second part of A Study in Scarlet. I am neither a Mason nor a Mormon, but I am willing to believe various authors who see similarities in the ceremonial words and handshakes used in the two traditions. In both cases, the rituals have religious meanings, the Masons looking to "the Great Architect" and the Mormons to God as understood by the Latter-Day Saints churches, and neither group tolerates the horseplay that we would understand as "hazing". A Study in Scarlet mentions the Endowment House in Salt Lake City, but does not talk about the crucial Endowment ceremony that takes place there. However, the Mormons who figure in the novel certainly have secrets, and their flying squad, the Avenging Angels, have passwords just as the Masons and the Ancient Order of Freemen do.

Other secret societies appear in the Canon as well, notably "the Red Circle, which was allied to the old Carbonari", into which Gennaro Lucca had been "initiated" at Naples. The arrival of the society in New York, with word that "a lodge would be held upon a certain date," precipitated the dreadful events of the story that is likewise called "The Red Circle". The society that figures as a red herring in "The Six Napoleons," though identified as "the Mafia," is not dissimilar, and no doubt has its own initiation rituals.

Finally, there is the Ku Klux Klan, the "terrible secret society" appears in "The Five Orange Pips." It clearly had its symbols, "a sprig of oak-eaves in some parts, melon seeds or orange pips in others," but since the intended victims were meant to understand the messages they were sent, they were hardly very secret. We are not told whether aspiring members of this particular version of the Klan had to undergo an initiation, or whether adhering to its anti-Republican political views was enough.

In popular culture these days, hazing is mostly associated with college fraternities and sororities, although the reputable ones have largely repudiated it. "Greek letter organizations" date from the early 19th century, but most of their practices as they have been known over the past few generations originated after the American Civil War, largely in the southern states — interestingly, the same time and place in which the original Klan held sway.

Unsurprisingly, no fraternities or sororities are mentioned in the Canonical stories, unless the Alpha Inn ("The Blue Carbuncle") qualifies on the strength of its single Greek letter. There is, however, what a newspaper quoted in "The Illustrious Client" called "that criminal fraternity which has so often had occasion to bewail the activity and ingenuity of the injured man", namely Sherlock Holmes. It is not clear whether the criminal fraternity had its own initiation procedures.