"I had reached the end of my adventures" [EMPT] 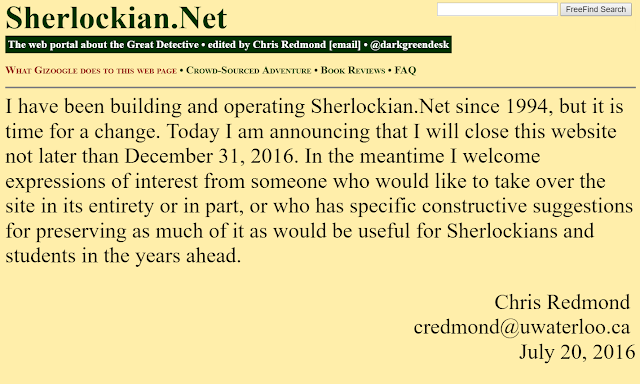 Our own online Sherlockian adventure extends to the early 1990s. During that time, there was a bulletin board at alt.fan.holmes and the Hounds of the Internet, but not much else.

Then in 1994, along came Sherlockian.net, which set out to capture all of the links about Sherlock Holmes on the Internet. It still stands as one of—if not the—best sites of Sherlock Holmes reference material online.

It became one of the sites we visited on a regular basis, and has constantly been an inspiration for some of the content we share here on I Hear of Sherlock Everywhere. While our our Resources section is nowhere near as complete, we tried to to our best to help keep up with some of the main links that we thought would be helpful.

But as Sherlockian.net proprietor and IHOSE contributor Chris Redmond told us in Episode 99, trying to document everything on the web quickly became a very difficult task.

As the online world of Sherlock Holmes has grown exponentially — particularly over the last four or five years of social media's rise to prominence — that task has only gotten more cumbersome.

So it was with great surprise and alarm that we saw Chris's announcement today that Sherlockian.net would be shutting down on December 31, 2016. This grand and legendary resource that has been online for 22 years might not be with us much longer.

We're hoping that we can get a stay of execution. We've already heard from some like-minded Sherlockians who want to see the site continue, or see its contents protected and given new life on other sites. The immense work that has gone into creating the hundreds of pages there (and believe us, we understand what it's like to create that much content) is at times a thankless job.

We have to believe that such a decision by Chris does not come lightly, and we don't want to see his life's work vanish in an instant. We have some ideas about how to keep the lights on or to continue to make the content available to interested Sherlockians around the world. Perhaps you have some ideas too. Feel free to leave a comment below or email us.

A valid first step is to create a sitemap of Sherlockian.net and catalog all of the content. If there's anyone who can help take a stab at that, we'd appreciate it.

The creative process is a daunting and lonely task at times. But preserving great content should be a collective work. And Chris's work at Sherlockian.net is as outstanding as it is prodigious. Let's make sure it's enduring.

If you have ideas or would like to get involved in some meaningful way, please leave us a comment below or email us.