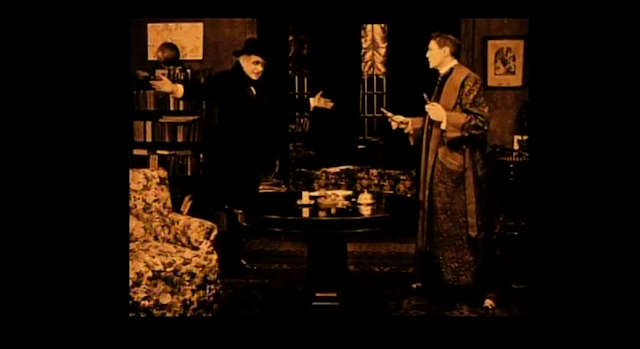 The 1916 Baker Street Journal Christmas Annual will cover the topic of William Gillette's film Sherlock Holmes on the occasion of its 100th anniversary. We here at I Hear of Sherlock Everywhere broke the news that the long-lost film had been discovered in Paris and covered the screening of the film at the San Francisco Silent Film Festival last year.

We're pleased to present four musical themes that were played for the American premiere of the restored Gillette Sherlock Holmes. The excerpts are meant to illustrate the article, “Scoring Gillette’s Sherlock Holmes,” that acclaimed composer Donald Sosin wrote for the BSJ Christmas Annual, describing how he composed his music. And although these film excerpts are best understood when used in conjunction with Donald’s article, they can also be enjoyed on their own — examples of how a great original Holmesian score is constructed and coordinated with the images.

The tracks come from the opening night performance when Gillette’s film was screened at San Francisco’s Castro Theater on May 30, 2015, where 2,000 people heard the score that night, performed by Sosin and his ensemble: Donald on piano with Günther Buchwald, violin; Sascha Jacobsen, bass; and Frank Bockius, percussion.

Since then, the film has attracted several first-rate scores – all quite distinct and all fine examples of the broad range of silent film accompaniment. The film has attracted several leading silent film composers – Stephen Horne who accompanied the film in Bangkok; Neil Brand in Paris, London, Pordenone, and on the Flicker Alley DVD; Steve Sterner at New York’s Film Forum; Dan Drazin in Northbrook, Illinois; Dennis James in Santa Barbara, California; and Phil Carli at the Library of Congress and the BSI Conference in Chautauqua. No two performers sound alike, each creating his own signature motifs and building on those motifs to give fresh perspective to the characters and plot lines.

The themes performed here are the building blocks that Sosin created to build his extraordinary score. The themes recur, permitting improvisation and ingenious acoustic effects and designed to provide a musical mirror to the ever-changing mood and action.

According to Sosin in an Indiegogo he ran, he has been commissioned by the Odessa International Film Festival to expand that 4-musician score for a 45-piece orchestra. The premiere of that composition is set for July 16, 2016. The music is in rehearsal and on schedule – a generous, anonymous donor stepped in to make up the short fall. We certainly hope that more audiences will have the benefit of hearing it outside of Odessa.

[Editor's note: special thanks to Prof. Russell Merritt, BSI ("The Trepoff Murder") for providing the clips and the written update.]