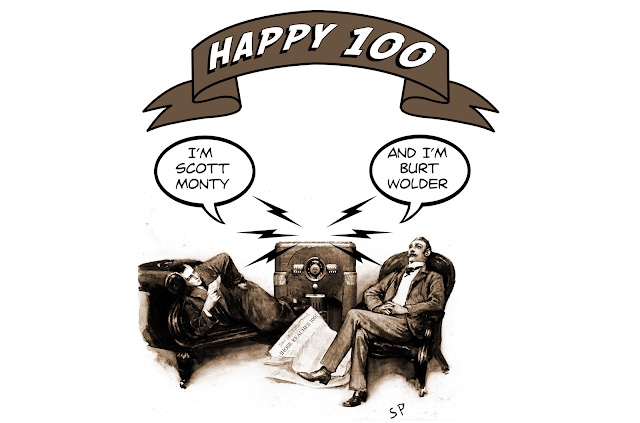 Well, we managed to do it. And it only took us nine years, an 18-month hiatus, one lost episode and thousands of fans.

Our 100th episode gave us a chance to reflect on exactly what turning 100 means, and to dive back into our murky and fuzzy origins. We try to answer some of your queries and we celebrate those who joined us previously before launching into our top memories of the show, as represented in audio clips. Our Gas-Lamp features two readings, including a new one created just for this episode. Finally, we wrap up with a couple of important announcements that you won't want to miss.

And perhaps there's an Easter egg somewhere as well...

We thank Mary Miller for her ongoing and generous support of our program on Patreon. Perhaps you'd like to become a patron in honor of our 100th show. If ongoing support scares you, one-time PayPal contributions are welcome too.

We have so many of you to thank — from those of you who wrote in with feedback, to those who provided reviews, created something for us, provided financial support, and of course, those who appeared on the show. It's all been absolutely overwhelming and this wouldn't be possible without you.

And extra special thanks to our spouses  Kathi and Mindi, who tolerate this silliness and allow us to interrupt the flow of home life more than we thought they would. Or certainly more than they'd prefer.

1:37 Welcome and intro
2:25 Someone else is pretty excited
3:19 Other centenary celebrations in 2016
7:10 Milestones can be difficult to celebrate, featuring Dennis Wolfberg
9:32 Our humble beginnings
11:14 Spending time
11:55 I Hear of Sherlock Everywhere - by the numbers
15:49 Multiple IHOSE interview guests
18:10 Your kind reviews on iTunes
20:24 Wessex Press
21:40 You asked for it / your favorite moments
23:29 How it all began
34:24 Remembering our hiatus
41:00 Looking back at our favorite moments
42:25 Mike Berdan on getting involved with Sherlock Holmes
45:12 Christopher Morley on the reality of Sherlock Holmes
48:00 Peter Blau on Edgar Smith
51:38 Otto Penzler gets defensive about his literary doppelgänger
55:23 Fritz Weaver recalls Baker Street, the characterization of Sherlock Holmes, and the importance of Conan Doyle
57:54 Michael Dirda reads from On Conan Doyle
1:01:59 Lara Pulver reflects on her success
1:05:03 Bert Coules on the role of the writer with BBC Radio, the importance of his director David Johnson recognizing the major characters in The Hound of the Baskervilles
1:11:20 Bert Coules talks about casting Michael Williams as Dr. Watson, as opposed to Nigel Bruce
1:14:55 A comic interlude: a halfway decent Jack Benny impersonation
1:20:22 Lyndsay, Ashley and Ardy from the Baker Street Babes play Jeopardy and make Burt's editing job a living nightmare
1:24:06 A flashback within our flashback as Steve Rothman is unruffled and Bob Katz freaks out about Dr. Rosenbach's credentials
1:26:57 Nicholas Meyer recounts how he was invited to the BSI dinner and how he overstepped
1:35:25 Susan Rice shares the story of the afternoon when women were granted membership in the Baker Street Irregulars, together with a recording of Tom Stix presiding at that very event.
1:42:53 The Baker Street Journal
1:45:02 The Editor's Gas-Lamp: a two-fer with "221B" and "A Long Evening with Holmes"
1:50:45 Housekeeping, special thanks and two announcements — listen closely, as we need your feedback

This episode includes our two longtime sponsors and we thank them. Please support our sponsors by visiting their sites:


Would you care to become a sponsor? You can find more information here.

Many more links, articles and images are available in our Flipboard magazine at  ihose.co/flipsherlock, as well as on the The Sherlock Holmes Community on Google+ (with over 3,700 members), as well as through our accounts on  Facebook, Instagram, Snapchat, Twitter  and Tumblr.


Please subscribe to us on iTunes, Google Play, Soundcloud, Stitcher or Spreaker and be kind enough to leave a rating or review for the show. And please tell a friend about us, in any fashion you feel comfortable.