"bear upon the case" [VALL]

Sherlock Holmes is no stranger to the animal kingdom. We have seen a delightful rodent version of the great detective in Basil of Baker street, a number of canine variations such as the animated Sherlock Hound and Wishbone, the dog from the children's series, dawning the Holmes role in "The Slobber Hound," and there has even been a Sherlock Sheep in the social network game of Farmville.

But there never has been quite a Sherlockian character quite like Octavius Bear, a 1,400 pound anthropomorphic Kodiak bear living in an alternate future world where humans have perished and have been replaced by intelligent animals.

We interviewed author Harry DeMaio on how he imagined this Holmesian series, one like no other.

I Hear of Sherlock Everywhere: Tell us about the world of Octavius Bear and why you decided to make a Holmesian character in a world of intelligent animals.

Harry DeMaio: Here’s the story background: About 100,000 years ago, according to scientific experts, a colossal solar flare blasted out from the Sun, creating gigantic magnetic storms here on Earth. These highly charged electrical tempests caused startling physical and psychological imbalances in the then population of our world. The complete nervous systems of some species were totally destroyed. For example, Homo sapiens lost all mental and motor capabilities and rapidly became extinct. Less developed species exposed to the radiation were affected differently.  Four-footed and finned mammals, birds and reptiles suddenly found themselves capable of complex thought, enhanced emotions, self-awareness, social consciousness and the ability to communicate, sometimes orally, sometimes telepathically, often both. Both speech production and speech perception slowly progressed with the evolution of tongues, lips, vocal cords and enhanced ear to brain connections. Many species developed opposable digits, fingers or claws, further accelerating civilized progress. Some others (most fish and underground dwellers) were shielded from the radiation and remained only as sentient as they were before the blast. This event is referred to as The Big Shock.  It remains under intensive study.

Alternate universes play an increasing level of importance in each succeeding book. Let’s hear it for Quantum Superposition and good old Schrodinger.

I wanted a new type of detective and I based Octavius on several prototypes, including Holmes.

Octavius is a nine foot tall, 1400 pound Kodiak Bear/consulting detective/scientist/inventor/seeker of justice/mega-billionaire owner of Universal Ursine Industries/narcoleptic war hero/gourmet-gourmand/somewhat sedentary and grouchy just on general principles. He is a hybrid character somewhat loosely based on Sherlock Holmes and Nero Wolfe with some characteristics of each but definitely his own bear. Octavius, among his many talents and accomplishments, he is a brilliant, self-taught practitioner in the wide ranging fields of biology, physics, ursinology, voodoo, teleology, chemistry, apiculture and oenology as well as a first rate electrical, electronic, structural, marine, aeronautical, mechanical and chemical engineer.  He has a few other interesting characteristics such as falling into brief, deep narcoleptic comas – side effects of his successful genetic experiments to eliminate the need for him to hibernate. He, his associates and nemeses are all figments of my warped imagination.

IHOSE: Octavius is inspired by Holmes but he has some significant differences. What are some ways the characters are similar and different?

HD:  The two primary inspirations for Octavius and his sidekick, Maury Meerkat are Holmes/Watson and Nero Wolfe/Archie Goodwin. Octavius is nine feet tall. Maury a little more than two feet. I wanted to play heavily on the sidekick dynamic with characters whose personalities, physical characteristics and backgrounds were wildly different but generally compatible. Octavius suffers from narcolepsy which pops up at very inopportune times.  Although he thinks he is, The Great Bear is not infallible and Maury lets him know it.   So do the Bearoness and Chita. 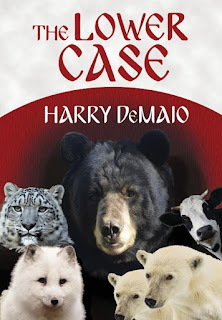 IHOSE: There really has never been a book series quite like this one. At times your books are as serious as Watership Down and at others as goofy as Zootopia.  What, besides the original Holmes tales, were your literary influences in crafting this series?

HD:  I’ve already mentioned Nero Wolfe (Rex Stout.) I am an animal enthusiast with a special affection for bears so I did a lot of research on the animal kingdom and queendom.  One of my primary villains, Imperius Drake is described as “Moriarty with wings,” The Thin Man films and some of the Sam Spade stories helped. You may have noticed that every chapter begins with a limerick and there are periodic disquisitions on the nature of this alternative earth. I also include short descriptions of the dramatis personae at the beginning of each volume. All of these features resonate well with the reader.


IHOSE:  Will we ever see Octavius Bear somehow meet the real Sherlock Holmes?

HD:  Octavius has had meetings and dealings with Fetlock Holmes, the Great Horse Detective. We’d have to switch to another alternative universe to have Octavius and Sherlock Holmes come together. One that includes Homo Sapiens. I describe one in Book Four- The Lower Case. The meeting is possible with a manipulation of time as well as location but not immediately in the cards.

IHOSE:  The question we ask every Sherlockian, if you were stranded on a desert island with just one Sherlock Holmes story, which would you choose and why?

HD:  "A Scandal in Bohemia" for several reasons. First, I greatly admire Irene Adler who comes as close to being a romantic interest as Conan Doyle ever invented. Second, Holmes both wins and loses in this one. Refreshing to see him caught up by The Woman. A shame she appears so seldom in the Canon and subsequent pastiches.


IHOSE: What are your upcoming projects?

HD:  Completion of Book Five - The Curse of the Mummy’s Case -  later this year. I’m also looking into converting the Casebooks into scripts for animated films.

HD: Females play major roles in my books. Chita, Frau Schuylkill and the Polar Bearoness Belinda Bearnaise Bruin Bear (nee Black) are reader favorites but there are many others – heroines and villains alike. Octavius’ mother, Juno, is one of my favorites. Octavius and the Bearoness marry in Book Two and at the end of Book Four, two cubs, one male, one female arrive on the scene. They have major roles in Book Five along with their governess, Mlle Woof. (Yes, it is possible for a polar bear and Kodiak to have offspring.)  Bearnice and Bearyl are identical twins and in addition to piloting Bearoness Belinda’s SST Concorde, they sing and act and appear in the Bearoness’ Aquashow – Some Like It Cold.  But Chita (or the  pseudonymous Madame Catherine Catt) seems to really resonate. Pardon the pun, but she’s a keeper.

Harry DeMaio is a nom de plume of Harry B. DeMaio, successful author of several books on Information Security and Business Networks as well as the four volume The Casebooks of Octavius Bear – “Alternative Universe Mysteries for Adult Animal Lovers.” The latest volume, The Lower Case, is available from MX Publishing. He is also a prolific writer of humorous poems and limericks. His website is www.octaviusbearslair.com.