"you and I will drive together to the Russian Embassy" [GOLD] 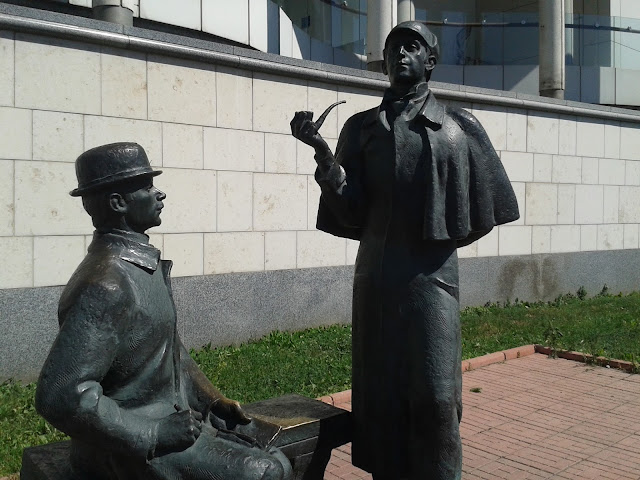 In 2006, I Hear of Sherlock Everywhere reported on the plans to create astatue of Sherlock Holmes and Doctor Watson (who are perennially popular in Russia) in the Russian capital of Moscow.

Having recently returned from a trip to Moscow, much of which was filled with visits to various literary monuments—of which Moscow is full—I thought it would not be out of place to report on the aforementioned Holmes and Watson statue, which now graces the embankment in front of the British Embassy. I visited the statue on my first trip to Moscow, two years ago, trekking through the 80-degree Moscow heat to a secluded embankment in an otherwise unremarkable district to find the statue in question, and I must say that the experience is slightly magical.

Back when the statue was only planned, many different locations were considered for it, with the Smolenskaya embankment (where the embassy is located) finally chosen. Yet the figures of Holmes and Watson were not based on Sidney Paget’s illustrations or Jeremy Brett’s depiction; rather, they were in the form of Vitaly Solomin and Vasily Livanov, who incarnated Holmes and Watson in an excellent and still-popular Soviet adaptation of the Canon.

This is part of what makes the statue magical: this cross-cultural connection. The Sherlock Holmes stories remain incredibly popular in Russian-speaking countries, while Livanov was acknowledged to be the best incarnation of Sherlock Holmes by Queen Elizabeth herself, and became an honorary Member of the Order of the British Empire. At the unveiling of the statue in 2007, the actor himself noted this cross-cultural connection:

“Anyone can destroy a monument,” he said, drawing on a cigarette. “But to unite two cultures, two nations, with one idea – that is not something anyone can do.”

As the Russian newspaper Komsomolskaya Pravda reported, Livanov seated himself on the bench between his bronze self and Doctor Watson and warned those present:

“If you touch Doctor Watson’s notebook, all problems and mysteries will be explained. As for whoever touches my pipe…. That person will become embroiled in a criminal conspiracy.”


Not having heard Livanov’s warning prior to my visit, it appears I have managed to both embroil myself in a criminal undertaking and solve any unexplained mystery, as I took a whiff of Holmes’ pipe and looked over Watson’s shoulder at his notebook: 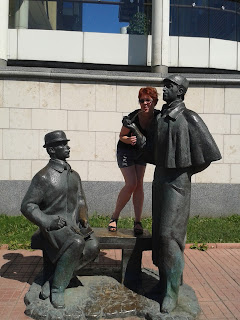 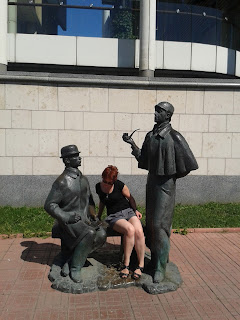 Some information in this post was taken from the article about the unveiling of the statue; all translations into English were done by me. All photos by me.