"an investigation which had extended" [REIG] 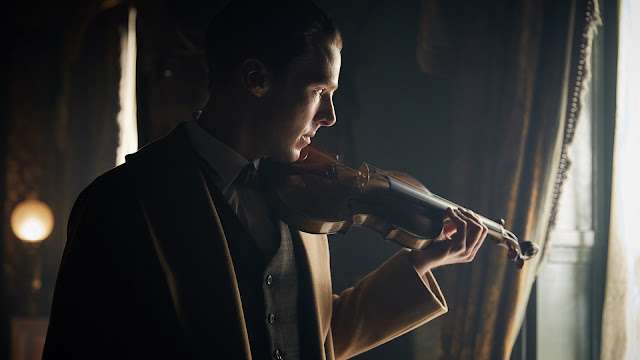 Over the weekend, we shared the announcement that the upcoming Sherlock special would air on the same date in the US and the UK — something fans have been clamoring for since the very first series. (Because who among us on the western side of the pond hasn't tried a VPN or other IP address workaround to log into streaming British video services?)

The trailer included with that announcement was ostensibly the same as the one released earlier in the month, but with the air date and the title of the episode included. "The Abominable Bride" is reminiscent of one of Watson's unpublished cases, "Ricoletti of the club foot and his abominable wife," as mentioned in "The Musgrave Ritual." We have yet to see just how much of the Canon is included in this special, aside from "The game is afoot" and a purple dressing gown.

An updated  and extended trailer as been released on the BBC YouTube channel,

One twist in this simulcast event: Sherlock: The Abominable Bride will be shown in 500 movie theaters across North America on January 5 and 6 at 7:30 pm local time. And in the UK, the film will be shown on 100 screens on January 1. Sherlockology has a full listing of the theaters. Based on the quality of the brief clips seen in the trailer, it seems like it would lend itself to the big screen.

As a bonus, the theatrical version of the special will include 20 minutes of additional footage, including a guided set tour of 221B Baker Street with executive producer Steven Moffat, plus a short documentary of the making of the episode with Benedict Cumberbatch and Martin Freeman.