A Visit to the Amateur Mendicant Society

"…who held a luxurious club in the lower vault of a furniture warehouse." [FIVE] 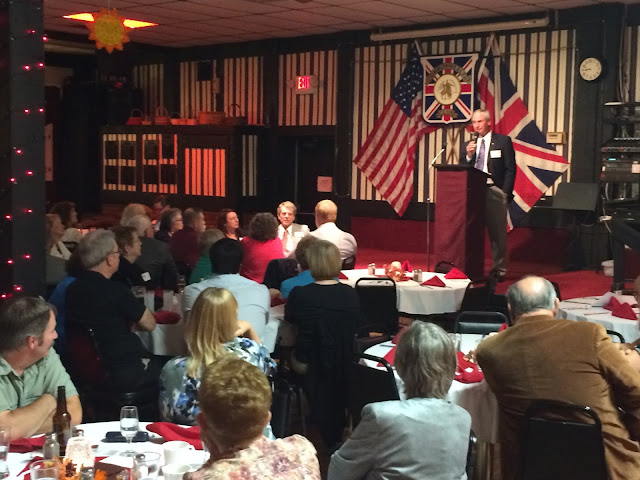 The Amateur Mendicant Society of Detroit let me have dinner with them on a recent Saturday night, so the least I can do is list ten things I really liked about the experience:


1. The chance to see a few old friends and make some new ones. John Sherwood, who sometimes is the British sleuth, hailed me before I ever got past the parking lot, invited me to sit at his table, and introduced me to a parade of good folks. At the same table was Regina Stinson, BSI ("A Little Ribston-Pippin"), and it was great to get to know her a little more.

2. A Sherlockian environment that was as old-fashioned as you could find anywhere. The AMS has been in existence since 1946 (with, I gather, a hiatus or two) and so have practically all the people who showed up for this meeting, one of three being held this year. Even the Baker Street Irregulars have given up using the titles of Gasogene and Tantalus for their officers, but the AMS sticks to tradition.

3. The hospitality of John Kramb, the current Gasogene, who welcomed me generously, and Christopher Music, BSI ("Wagner Night at the Opera"), whose title is the similarly traditional Commissionaire, and who helped me make my reservation despite the complications of the international border.

4. The merry participation of both sexes, particularly when it came to hollering out answers to the questions about "The Creeping Man" posed to the congregation by the Gasogene. I liked this way of tackling the story of the evening, too, providing much more participation than somebody's brief remarks, and more speed and action than a written quiz.

5. The cozy, panelled environment of The Commonwealth Club, incongruously located on Dequindre Road in the remote northern suburbs of the city, and the fact that you have to approach it by skulking around to the back of Kenny's Wine Shop, skirting the dumpsters, opening an inconspicuous little door and making your way down a hallway past the store-rooms, whereupon the glory of the Club with its Union Jack and heraldic decorations opens up before you. The whole experience was a lot like entering Camden House from the rear.

6. The food, served as a buffet by a culinary crew who might well have been the colleagues of Mrs. Hudson (Canon) and Mr. Hudson ("Upstairs, Downstairs"). It was, something one can't always expect in such a context, excellent.

7. The remarkable, informal talk given, as the highlight of the evening's program, by Roy Pilot, BSI, long-time collector and scholar. What he doesn't know about books and ephemera associated with Arthur Conan Doyle is not worth knowing. He told a little about how he became a collector, and offered a glimpse of three of his greatest treasures along with the stories of how he just happened to come upon them. Not every Sherlockian talk passes so blithely that the listeners wish it had gone on for longer, but this one certainly did.

8. John Sherwood's toast to Watson's Second Wife, one of the traditional moments at every AMS gathering. Apparently he was going to St. Ives, and, well… I must have a word with him to see whether it's available for publication somewhere.

9. The opportunity to sing "God Save the Queen". For all I know, most of the crowd was singing ironically, or solely in memory of Victoria Regina, but I grew up with this hymn as the national anthem, and although it is hardly ever heard in Canada nowadays, it still means a lot to me. Vive la Reine!

10. The closing recitation of Vincent Starrett's sonnet "221B," read by the Tantalus, Rob Musial. Apparently it's an AMS custom to stand up for these spine-tingling lines; I wish other Sherlockian societies did the same.


So, a good time was had by all. I should add, just for the record, that the evening was pretty much lacking in what I have learned to call shenanigans — the sort of Sherlockian behavior, often fueled by something a little choice in white wines, that involves uproarious laughter, impromptu costumes, and embarrassing photographs. Well, somebody did present the Gasogene with a stuffed monkey, intended to represent Lowenstein's black-faced langur. Otherwise, respectability reigned.
[Editor's note: such was the case because your humble editor was otherwise occupied in Michigan that evening.]

I can hardly wait for my next opportunity to visit the Amateur Mendicant Society.