The Gillette Luncheon Has a New Home

"willing to fill a vacancy" [REDH] 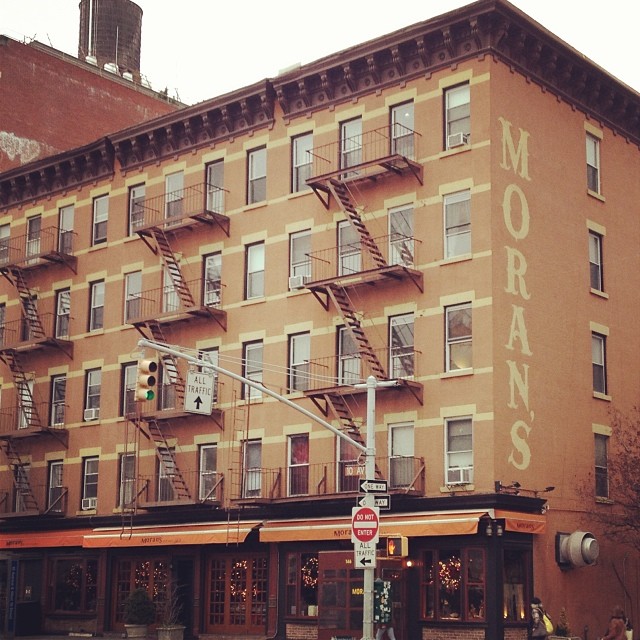 If you've ever attended a BSI Weekend in New York (or paid attention to the updates that emanate from the Weekend that you can follow online in early January), you'll note that one of the events is the William Gillette Memorial Luncheon.

In recent memory, the event has been held at Moran's Chelsea, a restaurant that had its origin in the Civil War era, when Irish immigrants dominated work on the Hudson River piers that lined the nearby waterfront. Inside Moran's, the era is still held close, as cozy wood-burning fireplaces are topped with glowing brass fixtures and Irish touches like the display cases filled with Waterford crystal, and a single lace curtain covering the back window.

But that two decade span of BSI Weekend history changed suddenly earlier this year, as the restaurant's owner sold the building and the new owner closed Moran's.

Considering this historic change — one that affects many attendees of the BSI Weekend — we thought it an appropriate time to reflect on the history of the Gillette Luncheon and its previous venues. Accordingly, we asked current host Susan Rice, BSI, ("Beeswing") ASH ("A Practical Handbook of Bee Culture, with Some Observations upon the Segregation of the Queen") for a summary of how the William Gillette Luncheon came to be.

Susan Rice: The custom of a luncheon on the same day as the BSI Dinner wafted into being in 1945. Clifton Andrew was an exceptionally convivial Sherlockian from Akron, Ohio, who traveled to New York each January on an overnight train from Cleveland. It arrived in the city mid-­morning and Clif was too eager for Irregular companionship to wait until dinner. His technique was straightforward: he lurked in the lobby of the Murray Hill Hotel, accosted anyone he recognized or suspected of being an enthusiast and invited them to join him for lunch.


A photograph of the 1948 participants reveals that he attracted eleven diners, Edith Meiser among them. From these early unceremonial occasions, Clif conceived of a luncheon, “with no particular theme in mind except Sherlockian fellowship, good food, and for those so inclined, liquid refreshment of various designs and potencies.” He dubbed it the "Scion Societies Lunch."


The luncheons of the 'Forties were irregular and depended on happenstance rather than planning, but starting in 1946, Clif Andrew walked the group to Keen’s Steakhouse. In 1953 a poster of William Gillette in his most famous role caught their eyes. The luncheon was immediately dubbed the William Gillette Memorial Luncheon, and we number the luncheon from that year.

A young New York editor named Lisa McGaw began attending the luncheon regularly in the early 'Fifties, and just before the 1962 birthday weekend she received a call from Clif to say he would not attend, and asking her to assume the responsibility of collecting the money and settling the bill. Clifton Andrew never again attended the birthday festivities. Later that year, he sent Lisa his mailing list, seventeen names in all, and asked her to take care of future arrangements. He died in December, 1963.

Lisa, a shy, private person, hosted the luncheon for 25 years. She continued to set the luncheon at Keen’s until it closed for some years, when she moved it to The Old Homestead, another Victorian steakhouse, where it remained throughout her tenure. She maintained Clif Andrew’s emphasis on companionship and conversation, inviting a speaker only rarely.

Clearly remembered, however was the year in the late 'Seventies when The New Yorker’s Brendan Gill spoke of his memories of William Gillette during Gill’s childhood in Hartford, Connecticut. In the summer of 1989 Lisa called me from her retirement in North Carolina to say that her health was failing and it was time to transfer the responsibility for the Gillette Luncheon. By that date, the mailing list she sent me numbered nearly 200. In 1994 we had grown too large to be accommodated in a single room at the Old Homestead, so at the suggestion of ASH Patricia Moran I relocated it to Moran’s Chelsea. We now attract roughly 140 participants.

Those are the facts behind the storied history of this happy little gathering. As you might imagine, the closing of the restaurant this spring and the weeks of radio silence that followed were of great concern to those who attended the luncheon in recent years. The good news is that Moran's has reopened and is now known as The Fillmore Room.

Susan had been in close contact with the new owners during that time and provided an update, along with a short summary of the lunch's history:


A brief recap: the luncheon is now more than 70 years old. In those seven decades it has had only three hosts, and except for the founding luncheon, only three dining venues. That record was challenged this year when Moran’s Chelsea was sold and closed for renovation. I am delighted to announce that this change will not affect our remarkable fidelity in an ever changing world: the new owner is intrigued by our history and the Gillette Luncheon on January 15, 2016 will take place in the same venue, now called The Fillmore Room. However, there is no truth to the rumor that Charles Sherlock Fillmore is its namesake.


Have you attended the Gillette Luncheon on the past? Do you have particular memories from your time there? Please consider telling us about it in our comment section below.

Watch the BSI Weekend website for more updates about the 2016 BSI Weekend in the coming weeks.