"such a wind as never blew on England yet" [LAST] 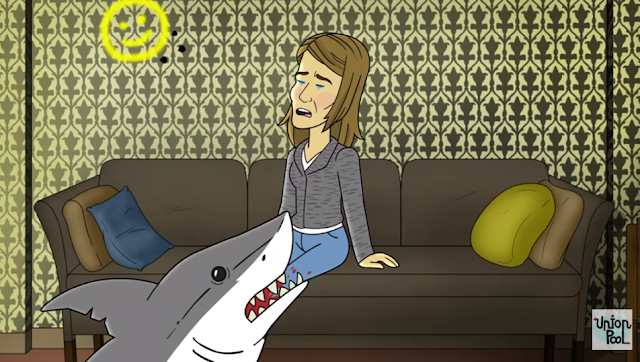 Earlier this year, the world had Sharknado

fever. The campy series was commissioned in 2013 by Syfy and produced by The Asylum — the production company responsible for mockbuster films. [You may recall they produced such a film called Sherlock Holmes

, which we covered here previously.] The series spawned two sequels, the third of which aired in July, 2015.

Enter the folks at UnionPool, who produce a weekly YouTube video series called TVOOVIES, a pop culture animated mash-up where hit TV series collide with blockbuster films. (You can see where this is going, right?)


Having previously produced such videos as "Toys of Anarchy" (Toy Story meets Sons of Anarchy), "50 Shades of Dr. Who" (we'll let you figure it out) and others, it was really only a matter of time before Sherlock was the target.

And when you're dealing with something that Rotten Tomatoes calls so "proudly, shamelessly, and gloriously brainless," who better to match it with than the ultimate manifestation of reasoning and logic than Sherlock Holmes? Ladies and gentleman, we give you, "Sherlocknado."


The voice actor for Sherlock did a fairly good job; it sounded like Alan Rickman impersonating Benedict Cumberbatch. And Jim Moriarty as the tornado was an inspired choice.