The Return of a Long-Lost Holmesian Forum

"Sit down and tell me how you came alive out of the dreadful chasm." [EMPT] 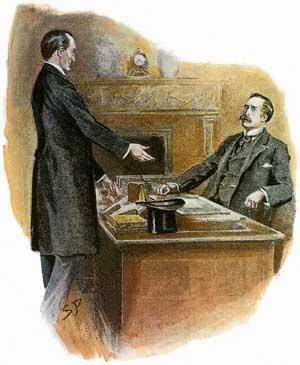 For those who have been around these parts for a bit, you may recall the forum Holmesian.net. At one point early last year, the site lost its domain registry and the very robust set of discussion boards, chat rooms and forums were lost. It was too bad, as there was a good deal of information gathered there and the site acted as a resource and portal for many, just as Sherlockian.net has done.

Just as we had seemingly put it out of our minds, chalking it up as another unfortunate loss of the Internet through a missed deadline or hacked site, we were pleased to discover that the architecture and even some of the content of the site has been resurrected recreated as 221B Baker Street (http://bakerstreet221b.boards.net). It's an entirely new set of administrators who were members of the old site.

The site bills itself as "the internet's only complete and concise English-language Sherlock Holmes online community," and requires signup/login for membership, which is free. All one needs to participate is an email address and to select a login name.

The site is neatly divided into a few sections to help members get around:

We suggest hopping over to the site and checking them out. Whether or not you're in the market for an online discussion forum that's outside of your usual path on the web, it might be good to see what's happening there - such as the discussion around why the works that make up the Apocrypha of Sherlock Holmes aren't included in the Canon.

Were you a member of Holmesian.net? What do you think of the new iteration of the site?