The Italian Secretary: My First Pastiche

"He was a kind of Italian piecework" [SIXN] 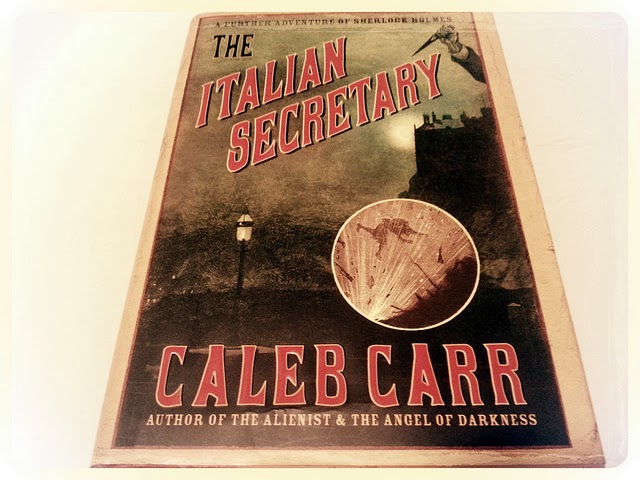 The Italian Secretary was the first taste of the Sherlock Holmes pastiche addiction I happily suffer from today. I was familiar with Caleb Carr's two books The Alienist and The Angel of Darkness, and his very Holmes like character, Dr. Laszlo Kreizler. The difference being Kreizler is a psychiatrist (or alienist as they were called) not a consulting detective.

So it's no wonder that the Conan Doyle Estate, Ltd. approached Carr to write a Sherlock Holmes story and had apparently asked that Carr's Kreizler, could somehow be in the book and work with Sherlock Holmes. Carr did not oblige and as much as I like the Alienist books, I'm glad he didn't.

As it is, Carr suffers from the dilemma that many well published authors suffer from when writing a Holmes pastiche; do you write a book for your current fans or do you write a book for Sherlock Holmes fans? Most try and do both and sadly, many fail. Carr also tries to do both but I think because his topics are similar to Doyle and Holmes, he's able to pull off a valiant effort that succeeds better than most, but make no mistake, this isn't a Doyle story, it's not much of a mystery and the suspense is waiting to see how it all comes to a head rather than who the culprit is.

This story takes Sherlock to one of my favorite cities in the World, (which could be partly why I liked this story as much as I do) Edinburgh Scotland. While writing this review it dawned on me that Doyle never sent Sherlock to Scotland, where Doyle is from. I find that a little odd, but Sherlock loved London and Sherlock stays firmly rooted there for the most part. However, in Sherlock's pastiche afterlife he does much more traveling. But I digress.

Edinburgh is infamous for it's ghost sightings and Carr takes advantage of that fact. But like all stories where Holmes is faced with ghosts, he isn't having any of it and sets about getting to the heart of the matter.

Multiple deaths occur while renovating the west tower of the Royal Palace of Holyrood complicating the already tense political climate in Scotland. The west tower is the wing where Mary, Queen of Scots, lived, and where David Rizzio (the Italian Secretary) was brutally murdered. Mycroft fears that this might be part of an attempt on Queen Elizabeth's life and sends his brother to investigate.

I have to give Carr some credit with his version of Sherlock and Watson. I usually find that British writers do a better job with the voice of Doyle's characters. Generally British authors have a particular flair with the English language that all but the most anglophile American authors just don't have. Especially American mystery writers. With the exception of some of the heavily accented Scottish characters, Carr does an admiral job here.

Carr, besides being a best selling fiction writer, is also a military historian and definitely did his research. When you read this book you get a feel for the political climate in Scotland and he does an especially good job building out the setting. Even if you've never had the privilege of visiting Edinburgh Carr makes it easy to visualize.

Pulling from his military knowledge Carr creates a very extravagant ending which ends with a siege on Holyrood with trebuchets and flaming projectiles. Very fun stuff.

It's easy to see why I got hooked on pastiches after reading The Italian Secretary and for that I owe a debt to Carr. But the last thing I found interesting was that the reception of The Italian Secretary is very mixed. If you look at the reviews of the book they're almost equally spread across all 5 stars. Trust me, that almost never happens. So I'm curious, if you read the book, what was your take?