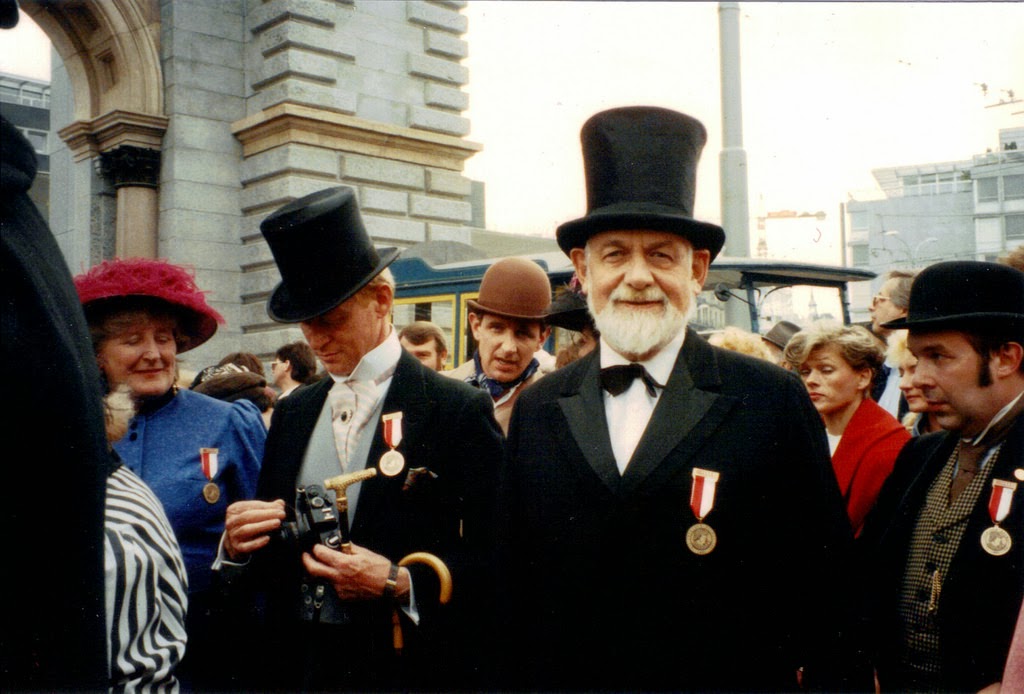 Joseph W. Moran, BSI ("Sir Augustus Moran, C.B.") died on February 18, 2014 at the age of 86. He was born in Cleveland, graduated from Yale in 1949 and worked for 43 years for NY Life Insurance Company as an actuary. Joe had 3 children, and one became an active Sherlockian -- Kathy, who is a member of The Norwegian Explorers.

At about 10 years old when Joe was supposed to be getting ready for bed, he was instead listening from the top of the stairs to the Holmes radio broadcasts that his dad had on the radio. The first Holmes story he read was "The Empty House" since it featured a Moran and he remembered that in junior high he did a book report on "Silver Blaze" -- and got a good grade.

Reading the Canon then took a long hiatus, but Joe got back into it when he booked a tour to London in the 1970s and stayed at the Sherlock Holmes Hotel. He decided to buy the complete works to read on the plane. A few years later he visited his college roommate, who was a member of The Sherlock Holmes Society of London, and Joe was encouraged to join.

His Sherlockian involvement became serious in the early 1980s when he attended the first Autumn in Baker Street weekend. He never missed another one. Joe joined and actively participated in all the local scions -- The Three Garridebs, the Montague Street Lodgers, Mrs. Hudson's Cliffdwellers, The Epilogues of Sherlock Holmes, The Priory Scholars, etc.. At these meetings, Joe was always ready to discuss the rehabilitation and reputation of the much defamed Col. Sebastian Moran, who he believed was an "honorable soldier." He worked for 30 years on an unpublished treatise on the subject.

He ran The Priory Scholars jointly for some years and was also their quizmaster. One of the highlights of Joe's early involvement was meeting Jeremy Brett at a Priory Scholars meeting. Brett was on tour promoting the Granada TV series and was invested in the scion at that meeting.

Joe attended his first BSI weekend in the early 1980s and wandered into the Algonquin Hotel where he was greeted by Tom Stix, who asked him to join him for breakfast the next morning. John Bennett Shaw was also at the breakfast table and Joe was delighted that he got to listen to CBS news interviewing Shaw right then and there.

One of Joe's favorite Sherlockian adventures -- and there were many -- was the Reichenbach Centennial in 1991 in Switzerland with 120 people dressing in costume for 9 days. He tells the story of the reenactment at Reichenbach Falls. The dummies were on bungee cords and the first time they went over the Falls they landed upright, so they had to be hauled back up to try again.

In 2000, he won the Marlene Aig-Patricia Moran Award for Sherlockian Scholarship and Good Comradeship given by The Montague Street Lodgers. The Three Garridebs awarded him the Georgia Amick Award for best scholarly presentation in both 1994 and 1997, the Two Shilling Award in 1998, the Prescott Prize in 2004, and the William P. Schweickert Award in 2007.

Joe may be the only Sherlockian who, on the night he received his investiture, had his suitcase stolen from the car with his new investiture in it. Joe was invested into the Baker Street Irregulars in 1991 as "Sir Augustus Moran, C.B."

Joe and his trademark deerstalker cap will be missed at all Sherlockian events, but especially those in the New York metropolitan area.

Joe's memorial service has been set for Saturday, March 1st at 11:00 a.m. at the Larchmont Avenue Church, 60 Forest Park Road, corner of Larchmont and Forest Park

If you would like to send a letter of condolence there are two addresses:
The Moran Family
636 Ethan Allen Hwy.
Ridgefield, CT 06877

If you would like to make a donation as a memorial to Joe, his family suggests The Beacon Society to bring Sherlock Holmes to young people. Donations may be made online (at the website) via PayPal, or checks in any amount made payable to The Beacon Society and sent to:
Carol Cavaluzzi
The Beacon Society
6409 Terese Terrace
Jamesville NY 13093

If you have memories of Joe that you would like to share, please add a comment below. There is also a site with a book of memories set up, where you may add your thoughts. He touched many lives and was a true gentleman.