What Is It That We Love in Sherlock Holmes? 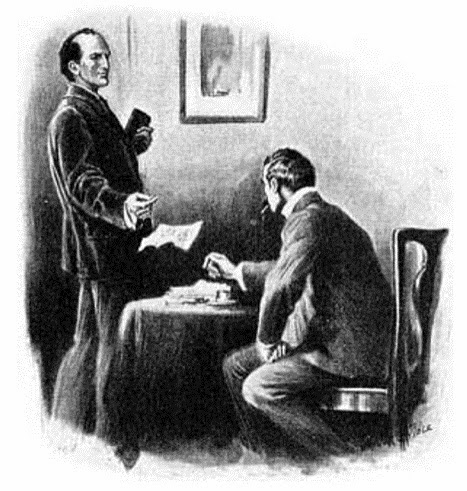 With the rise in television programs, movies, books, games and other media entities dedicated to Sherlock Holmes, the commentary and punditry has risen concurrently. And because Sherlock Holmes is a figure deeply rooted in popular culture and history, everyone thinks he knows the character. While we're willing to begrudge the occasional swipe, at times it's difficult for those of us who have intimate knowledge of Holmes - indeed, those of us who have read the Canon multiple times, studied the stories and their characters, and even written scholarly papers on them - to accept the superficial criticism or commentary by those who simply are not quite as informed.

Recently, Esquire ran a piece titled "Why We Love Sherlock" by Stephen Marche (@StephenMarche). The subtitle ("(Hint: we're all a little nuts)") should have given it away, but we read along anyway, thinking that there would be some insightful and universal truth that we could relate to. Instead, we were treated to a shallow analysis of the the character, whom Marche calls a "flat" character (as opposed to a "round" character) - one that is incapable of surprising us.

As you can imagine, our faithful fans on Facebook took issue with that:


Marche spends most of his time on the three screen versions of Sherlock Holmes currently in the public's psyche, because evidently the public isn't capable of thinking beyond entertainment media. And even so, Elementary and the Ritchie films are respectively dismissed as nothing more than a branding exercise and an excuse for slow-motion action sequences. As to the BBC Holmes: he is summed up as a "basement-dwelling asshole genius" who knows how to wield technology. In an effort to spare you the need to read the entire article, Marche's final sentence sums up exactly why he thinks we love Sherlock Holmes - or at least the Holmes of the screen right now:


...we are, in turn, branding whores, rampantly violent, and trapped in a technologically enabled loneliness."


Perhaps we have a more romantic notion of why Sherlock Holmes fascinates us. Ours is one that harkens back to the early days of the Baker Street Irregulars and the Baker Street Journal. For it is none other than Edgar W. Smith, BSI who penned "The Implicit Holmes" for the April 1946 edition of the BSJ (Vol. 1, No. 2) that in our view so rightly summed up then - and now - why we're so taken with this unique consulting detective.


The Implicit Holmes by I Hear of Sherlock Everywhere

For those among us who appreciate the Canon as a textbook of friendship, who can see the glimmers of humanity that occasionally pop from Holmes, who can discern between a series of well-told stories versus a litany of cryptograms, and who are able to dig deeper into the human psyche than the likes of a TV Guide analysis, we can brush aside the amusing ignorance of those who think they know Sherlock Holmes.

We prefer the eloquence of Smith and his willingness to think highly of his readers rather than Marche's lowest common denominator approach in Esquire.


[Editor's note: If you're interested in reading more of Smith's editorials or in seeing the deep scholarship and analysis that Sherlockians have been pursuing for nearly 70 years, the eBSJ puts all of the back issues from 1946-2011 available at your fingertips.]
--