A Brief Introduction to Sherlockian Societies 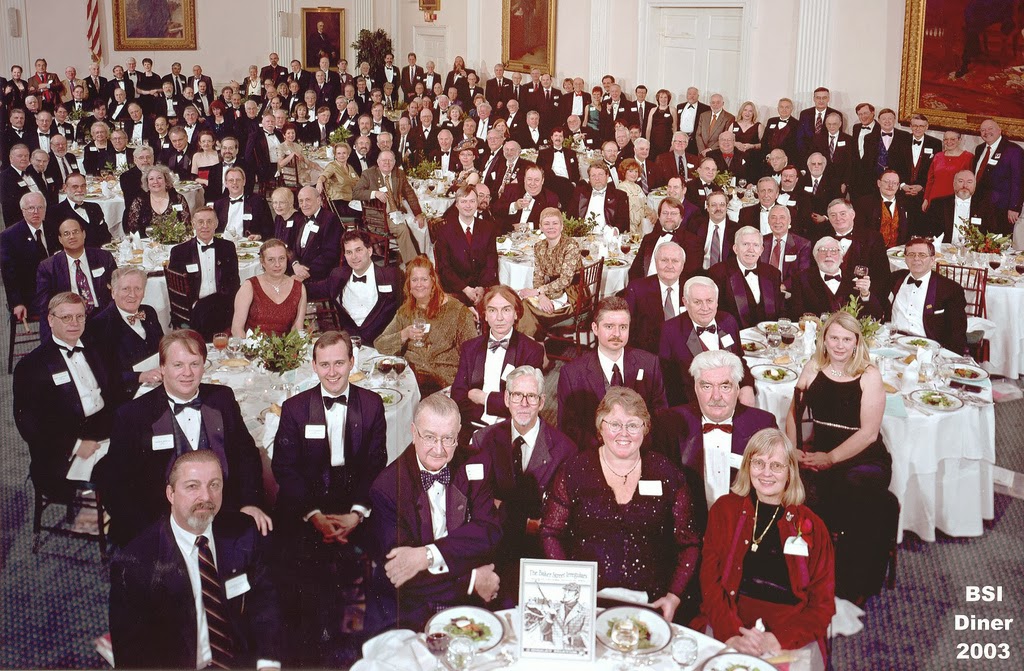 There's a piece of lore handed down in the Sherlockian community that states that all one needs for a Sherlock Holmes society is two Sherlockians, a copy of the Canon, and a bottle. In a pinch, one can do without one of the Sherlockians.

I must, respectfully, disagree. In my view, it is the bottle, rather than the other Sherlockian, that could be dispensed with. The simple reason is this: the love of a story, a character, a world, demands to be shared. Every Sherlockian has his or her own unique journey in discovering the Canon, and those personal experiences are difficult to share. But the ensuing love of a world and its people is a love that demands to be shared.

The world of Sherlock Holmes is no different - it is a world that begs to be lived in and shared, and it is, the world over, in the form of Sherlockian societies.The most famous and prestigious of these is the Baker Street Irregulars - dating from 1934, it is ancient, revered, and by-invitation-only. But, if you have no such invitation, there are a number of "scion" societies the world over which have no such barriers to membership, and thus many ways to join the Sherlockian community of scholarship and celebration.

We have a short listing of societies with websites on our Resources page; but the most comprehensive list of societies can be found at Sherlocktron. And the Sherlockian Calendar keeps a running tally of events.

If you seek to share your love of Sherlock Holmes and John Watson, then joining is as simple a matter as finding the society closest to you (they are organized by place in alphabetical order) and contacting the appropriate person listed. Of note: a very few societies are still male-only, but the vast majority are more inclusive. Lest you stumble upon one for which you do not meet the criteria, it is my experience that you will be directed to a society you can join. Joining is usually as simple as expressing interest and being added to a mailing list of events and society news (though several societies do have dues). I must also add that, in my experience, at the meetings of such societies, both Sherlockians and bottles occur in copious quantities, and copies of the Canon are also rarely dispensed with. Furthermore, unlike our idol, who loathes every form of society with his whole Bohemian soul, Sherlockians are sociable creatures, always happy in the company of other like-minded aficionados.

I have had the good fortune to belong to a number of Sherlockian societies - the Criterion Bar Association in Chicago, while I completed my studies in that beautiful city, and the Sherlock Holmes Society of France, for the year that I lived in Paris. Both of these societies offered companionship, dialogue, and a myriad ways to bring Sherlock Holmes to life. I hope my details below of the various events I've engaged with give a taste of what exactly it is that Sherlockian societies do, and that these descriptions encourage those readers who have not joined a Sherlockian society yet to seek one out if time and location permits.

My experience with the Criterion Bar Association was mostly that of meeting regularly with other members (somewhere around every two or three months) at a respectable restaurant; this was a time to mingle, feast, and discuss the Canon. However, each meeting would not be complete without a more intellectual component, for to be a Sherlockian means to be infinitely curious and constantly willing to fill that brain-attic with new facts both useful and useless. As such, each meeting, in addition to the quizzes, prizes, and conversation, involved a lecture (and discussion afterwards) of a a particular topic relating to Sherlock Holmes or the Victorian period. (The ones that come to mind personally are a lecture on Aristotle's philosophy of friendship as it applies to Holmes and Watson, a lecture on indexing, and one on Victorian gardens). It is difficult to share that feeling of connectedness that comes from being gathered together to delve so deeply and intellectually into the same world, and even more difficult to describe that profound emotion each Sherlockian doubtless feels when we all rise, at the end of each meeting, to read the famous Vincent Starrett poem "221B" and toast the Detective.

However, many Sherlockian society events range beyond an intellectual gathering. In my time with the Sherlock Holmes Society of France, I have also had a chance to experience the stories in a way that one might call "first-hand." Joined by a number of other Holmesians, I dined at the Hotel du Louvre, where Holmes caught a spy in "The Bruce-Partington Plans" and toasted Conan Doyle in the hotel where he spent his second wedding night. The highlight of my year, of course, was the yearly Holmesian Christmas Dinner at the Gare de Lyon, the Parisian train station through which Holmes must have passed in order to reach Switzerland from London. Each experience was a little bit of living the Canon, made more meaningful by the company I shared it with.

I hope that these (rather personal, I admit) reminiscences give at least a taste of the variety, creativity, and joy of the Sherlockian community the world over. If you are not yet a member of a Sherlockian society, I urge you to join. You will not regret the friends you will make, or the way that the activities and companionship will bring the Canon to life. And, should you be interested in a more detailed history of Sherlockian societies, Sherlockian.net offers an engaging summary.