The Secret Message in the Closing Credits of Sherlock

"these characters convey a message" [DANC] 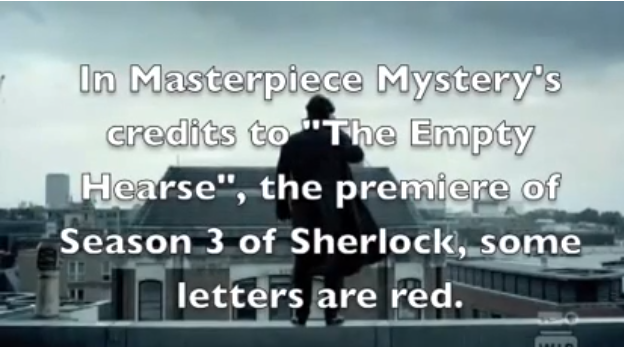 Series 3 of Sherlock concluded on PBS last night (in most markets), with "His Last Vow." We won't offer any spoilers here, for the sake of those who have yet to fire up their DVRs or whose affiliate stations haven't yet run it.

But for those who tuned into the January 19th premiere of the series on Masterpiece were provided with a great puzzle during the end credits, courtesy of show-runners Mark Gatiss and Steven Moffatt.

Watch this video and observe:

The letters spell out W-E-N-G-C-H-I-A-N-G.
Or, Weng-Chiang, for those of you familiar with the Whovian universe. Which is from "The Talons of Weng-Chiang," a six-part series in Season 14 of Doctor Who, in which we find Tom Baker dressed as Sherlock Holmes.

How's that for all of you Whovians out there?

We've written before about some curious connections between Sherlock Holmes and the Doctor. On of them is that after leaving Doctor Who in 1980, Tom Baker appeared as Sherlock Holmes in an adaptation of The Hound of the Baskervilles. Thankfully, you can watch this adaptation via YouTube. 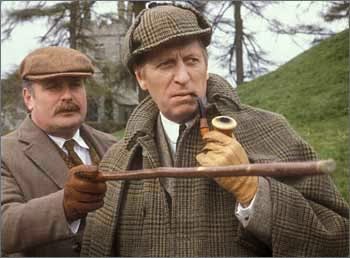 Also, for more information about Talons of Weng-Chiang, please visit this earlier post as well as this more in-depth review. (And please be sure to check out the Special Edition DVD, which contains numerous documentaries about the Victorian era, and are worth watching on their own)