"Of all the facts which were presented to us, we had to pick just those which we deemed to be essential, and then piece them together in their order...." [NAVA] 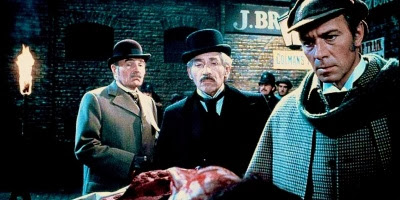 The spiritual and religious Holmes, interview with a Babe, naming your newborn "Sherlock", how the 1970s changed the face of the Great Detective, a visit to The Sherlock Holmes Museum of London, the return of The Saturday Review of Literature, how to make a desirable DVD box set even more desirable, the greatest 'bromance' ever, why a (empty) hearse brought tears of joy to a nation, Sherlockian studies - Canadian style, an illustration of a Xmas story without slush and more in the latest Weekly Sherlock Links Compendium from Matt Laffey.


Sherlockian.net recently announced a new project entitled "Spiritualizing Sherlock" wherein site proprietor Chris Redmond and Lindsay Colwell, a Sherlockian recently drawn back into the fold, investigate the role of religion in the Canon: "If you have ever wondered whether Sherlock Holmes was a member of the Church of England, a Lutheran or a Zoroastrian, and (more important) if you have ever thought about a Sherlock Holmes tale and considered the religious and spiritual implications it contained, your proverbial prayers have been answered. Today we launch “Spiritualizing Sherlock: A Study of the Religious and Theological Themes in the World of Sherlock Holmes”. The purpose of the project is to make possible a systematic understanding of all the religious and theological matters that are explicit or implicit in the Holmes canon, and what we can learn from them. We will begin by casting as broad a net as possible, to include religious practices and institutions, theological ideas, and also moral teachings." Plans are underway to compile and make available online a definitive bibliography of writings on Holmes and religion. "In a later stage, we hope to develop a synthesis of the information and ideas that appear through the bibliography and our discussions of it, and to demonstrate patterns of religious ideas associated with Sherlock Holmes, Arthur Conan Doyle, and the Sherlockian Canon. This part of the project will, we hope, result in a published monograph or e-book that will be a real contribution to Sherlockian knowledge." Redmond, a sometimes lay preacher, and Colwell, a theologian by training, bring the necessary enthusiasm and holy cred to a project that's sure to edify and provoke, and will no doubt illuminate an under appreciated aspect of the Canon.


“I also wanted to give a voice to young female fans. We’re poked fun at constantly by the media and those who don’t necessarily understand fan culture, but while we may have quirks and in-jokes, there’s an amazing level of scholarship and discussion happening. It’s always overlooked and I wanted the podcast to showcase both sides of the coin, if you will,”

sayeth fearless leader of the Babes of Baker Street Kristina 'Curly' Manente. Along with the Babes' usual Sherlockian podcast fun, make sure to check out their most recent episode reviews of CBS's Elementary and the new Russian Sherlock Holmes.

Radio Times reports on the newest baby naming phenomenon to sweep England: "Sherlock" has entered the list of top baby names for boys in England and Wales, after five families registered it in 2012....This isn’t the biggest rush on a baby name since time began but have you ever met someone called Sherlock? Exactly. Between 1996 and 2011 the detective’s name didn’t appear at all in the annual lists of top baby names for boys compiled by the Office For National Statistics....But once a name has been registered more than twice, it makes the cut. For Sherlock, that year was 2012, when it ended up 3,416th on a list of 4,805 male names, in the company of Ulysses, Roland and Timofey, which (among many others) also racked up five registrations apiece." (Thanks to Jack Wilson+ for the tip!)

The Consulting Detective makes the case for "Why Murder By Decree (1979) Is Perfect." Featuring Christopher Plummer's second outing as Holmes - he first appeared as the Great Detective in a 1977 TV adaptation of Silver Blaze (an under-appreciated though excellent adaptation) - and accompanied by James Mason as Watson, Murder By Decree is both a typical and atypical 1970s-era Holmes adaptation which pits the Great Detective against Whitechapel's most notorious denizen, Saucy Jack. Noting that Murder By Decree was not the first Sherlock vs. Jack the Ripper film - that honor goes to A Study In Terror (1965) featuring John Neville as Holmes and Donald Houston as Watson -


"it features a far darker plot, draws off of real events and characters and features one of the finest yet controversial portrayals of Sherlock Holmes....Much like The Private Life of Sherlock Holmes (1970) and The Seven-Per-Cent Solution (1979) there is something very different about this version of Sherlock Holmes. Christopher Plummer's Holmes is a kindhearted, very sincere man, at odds with the cold, calculating genius portrayed in Arthur Conan Doyle's originals...Holmes still manages to unravel a tangled skein of events surrounding the Ripper murders, but he feels far more empathy towards all those involved."

The 1970s was not only a boom time for Sherlock Holmes, but it was a time when (Sherlockian and non-Sherlockian) writers and directors alike felt free to reinterpret and reanalyze the life and times as well as the psychology of a character whom many, until that time, had assumed inhabited an unbreakable mold. Murder By Decree certainly broke that mold - to positive effect - and for that reason alone certainly deserves a place in the upper echelons of great Holmes cinema.

Fitzrovia News, a blog based out of London, recounts a recent trip to The Sherlock Holmes Museum of London:


"If you’re looking for a fun activity, in the City of Westminster, this festive period, then why not pop along to the home of Sherlock Holmes. My friend and I didn’t even know that this quaint little museum existed but after dodging the dreaded Madame Tussauds’ queue, we looked up where else we could go in the area. In comparison, the queue to the Sherlock Holmes Museum was long but moved very quickly and we were soon inside the warm, Georgian house, for only £8 I may add."

Famous for its recreation of the sitting room at 221B as well as a menagerie of life sized, wax Canonical characters and fascinatingly detailed dioramas (Evil exalted on the Moor...in miniature!), I don't know of a single Sherlockian who has visited the Museum and not come away amused by the displays. Where else on Earth can you meet a suspiciously literate beggar with a twisted lip, watch as the hand of justice cuts down "the worst man in London" and look into the eyes of the Napoleon of Crime?

The Saturday Review of Literature, edited by Donald Pollock and friends, announced that SRL 2014, Issue No. 2 will be "published on January 18, 2014. Copies can be ordered in advance for $5.00 (which includes postage) to: Donald Pollock 521 College Ave. Niagara Falls, NY 14305....We can promise something of interest, if not outrage, for everyone. Copies will be mailed out following the BSI Weekend, though I am happy to bring along to New York copies for anyone who orders in advance."

Den of Geek reports on BBC Worldwide's announcement of a special edition BBC Sherlock box set. Limited to 3000 units, each set will contain all three series of Sherlock on disc as well as a copy of an episode script from the first series penned by Steven Moffat, a letter from a "popular returning character" and a soft touch A6 size notebook all housed in the poshest of packages. (Thanks to IHOSE for the tip!)

Wales Online looks at 20 TV 'bromances' to rival BBC Sherlock's Holmes and Watson. If you're unfamiliar with what a "bromance" is "a close non-sexual relationship between two (or more) men, a form of affectional or homosocial intimacy," cf. buddy film, male bonding or any BBC Sherlock scene featuring just Sherlock and John.

Mirror announces BBC Sherlock mini episode Many Happy Returns to air on Christmas Day in the UK. I've been attempting to remain un-spoiled so you'll have to follow the link for more details. On a related note, deerstalkers off to the BBC promotions department for how they announced the UK air date of the Series 3 premier: driving an old fashioned hearse around St Barts adorned with the words "Sherlock" and the air date and then parking in front of the now infamous 'red Sherlock phone box'.


Dan Andriacco in "Those Creepy, Serpentine Master Criminals" points out the "herpetological similes" which Holmes applied to Moriarty as well as "the worst man in London" and master blackmailer Charles Augustus Milverton.

Doyleockian looks at speculation surrounding Holmes' retirement in "Sherlock Holmes post 1903 - the Bee-keeping Years". "The subject of Sherlock Holmes’s retirement is one as open to speculation as the great hiatus. In fact, you could argue, that they are much the same. They are periods when Holmes’s movements are largely unknown." So just what was Holmes up to between the two mystery periods of "December 1903 - July 1907 and 1907 (post "Lion’s Mane") to August(ish) 1912?" A truly fascinating hole in the world of Sherlockian studies.

The Bootmakers of Toronto - the legendary Sherlock Holmes Society Canada - have recently joined the Sherlockian Twitterverse with @BootmakersTO as well as announcing a reboot of their official website TorotnoBootmakers.com. And don't forget to download for free the latest issue of the Bootmaker's journal, Canadian Holmes (Vol.36 No.1, Fall 2013) in either epub or PDF format. Standout articles this issue include "Sherlock Holmes in ‘The Hands of the Jews:’ Jewish Stereotypes in the Canon", "The Victorian Concept of Honour in The Bruce-Partington Plans" and "Science and Sherlock Holmes".


Sidgwicks celebrates December with the discovery of this bold and wonderful scene featuring Holmes and Watson traipsing through London in an attempt to discover just how the "bonniest, brightest little blue egg that ever was seen" ended up in the crop of a Christmas goose. Russian illustrator Adrian Yermolayev created this Christmas scene without slush (to paraphrase Kit) in order to accompany “The Adventure of the Blue Carbuncle” from a Soviet-era collection of Holmes favorites titled The Red-Headed League and Other Stories (Saint Petersburg: Detgiz, 1945).
--
12/07/2013 01:01:00 PM
always 1895, blog, Matt Laffey, News, recurring feature, scuttlebutt