"the lawyers have been at it" [REIG] 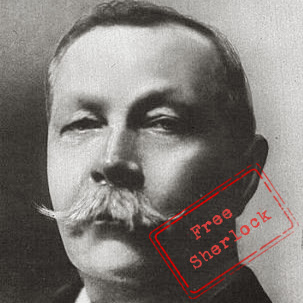 As you've no doubt observed, if you've seen anything of the news of the past few days, the "Free Sherlock" case has concluded, with the plaintiff emerging victoriously. It's been big news, getting coverage in such circles as The New York Times, The Guardian, The Hollywood Reporter, The Wall Street Journal and scores of other publications.

As listeners of our program know, Leslie S. Klinger, BSI ("The Abbey Grange") has been a frequent guest on the show, joining us for a two-part interview on his role as consultant to the Robert Downey, Jr. films, and then again talking about his Annotated Dracula work. Of course, Les is also the lead plaintiff on the lawsuit in question. You can read some background to this and listen to one of our most popular episodes in the links below.

We were once again joined by Les, who outlined the background of the case and discussed some of the legal aspects of copyright that have led us to this juncture. We try to keep the discussion as interesting as possible for the lay people out there, and Les even manages to bring in the 1903 coronation of Edward VII as part of the case law history.

As if landing an interview with the lead plaintiff in the case weren't enough, we also managed to sit down with Betsy Rosenblatt, BSI, ASH ("Lucy Ferrier"), who is not only a second generation ASH and BSI, but also a legal scholar who just happens to specialize in intellectual property law (how fortunate is that?). Betsy touches on some additional points that will undoubtedly be of interest.

While we weren't able to find an Editor's Gas-Lamp per se, we used a bit of scholarship presented at the annual meeting of the Speckled Band in 1992 by the (now) late Joseph Merriam. We've included it here as a bonus.
Impact of the Law on the Sherlock Holmes Stories by I Hear of Sherlock Everywhere

Your thoughts on the show? Leave a comment below, send us an email, call us at (774) 221-READ (7323) or use the Speakpipe app right here on the site. Connect with us on Facebook, and Twitter. And of course, our web- and app-based Flipboard magazine is a nice collection of links, articles and images.

And above all, please let our sponsors know that you heard us rant and rave about their excellence during the programme: Wessex Press and The Baker Street Journal.
--