It's Here: The Interactive Trailer for Sherlock Series 3

"allowed you to wax rich" [STUD] 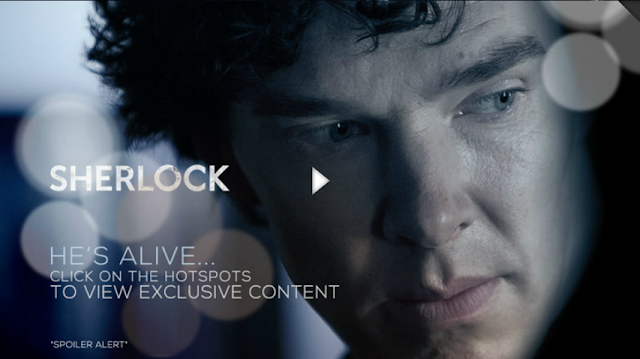 The world has been waiting for the official trailer for BBC One's Sherlock for quite some time. We've seen the release of 30 press photos, the announcement of the official air dates on BBC One and on PBS, the offer of a limited box set, the teaser trailer and much, much more.

But the official trailer has eluded everyone so far. Until now, that is. Of course, it's widely available on YouTube, but there's an interactive version that we think is much more unique. It's a superb bit of technology that gets the viewer involved and unlocks more content.

For the third time, BBC One have partnered with wireWAX to launch an interactive video, this time for Sherlock Series 3. The unique experience allows viewers to reach out and click (or touch - for mobile too!) the tags throughout the trailer and get access to exclusive, unseen footage, photos and background. Fans can also find a hidden tag (which appears to the left of Sherlock’s grave on the first scene) and entering a secret code (051113 - the number entered into the keypad in the trailer) to access unseen content from the new series.


Check out the interactive trailer and see how #SherlockLives with hidden content.

In the trailer, Watson states what many of us may be thinking: "I don't care how you faked it. I want to know why."

If you have any reaction to the interactive video, we'd be interested to read your comment below.