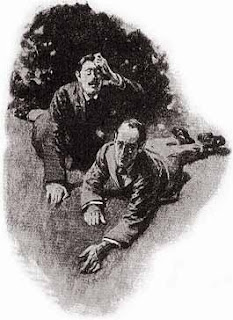 In a number of press pieces about the #FreeSherlock case, the business entity known as the Conan Doyle Estate, Ltd. gave a reply stating that it would be appealing the ruling in the case.

Benjamin Allison, the lead attorney for the defense, indicated that the organization was not giving up. Although, reading  his press release on the subject, it seems to us to indicate that he thinks they were on the winning side:

Santa Fe, N.M. (December 29, 2013) -- A recent ruling from a Chicago trial court held that part of Sherlock Holmes's and Dr. Watson's literary characters are in the public domain, but the decision continues to protect all characteristics of the two men developed in post-1922 stories by Sir Arthur Conan Doyle. The Conan Doyle Estate Ltd. had argued that because the Holmes and Watson characters were not completed by Sir Arthur until a series of stories whose copyrights continue through 2022, the characters remain protected through 2022. The ruling did not provide a direct answer to this argument and appeared not to acknowledge the basic copyright rule that highly delineated characters are entitled to their own copyright. The Estate hopes to appeal the decision so that Sherlock Holmes and many other significant characters created over a series of novels or stories receive protection for the full copyright term intended by Congress.

In the meantime, even under the current ruling from the Chicago trial court, all development of the Holmes and Watson characters by Sir Arthur in ten post-1922 stories remain fully protected by copyright. These ten stories—set at a variety of earlier points in the two men's fictional lives—contain significant elements of both characters, including Sherlock Holmes's mellowing personality, the change in Holmes’s and Watson's relationship from flatmates and collaborators to closest friends, and a host of other developments, skills, and elements of background. While plaintiff Leslie Klinger sought a ruling that some of these character traits were free for all to use, the Court rejected Mr. Klinger's effort in this regard and held that all such characteristics of Holmes and Watson are protected.

The Court further modified its ruling as follows: "The Court, however, has already clarified that Mr. Klinger does not seek a judicial determination of the copyright status of the Sherlock Holmes character, however, and thus the Court does not address this issue." (emphasis added).

Nearly a third of the stories in Mr. Klinger's first co-edited story collection, A Study in Sherlock, use protected post-1922 story elements. That book's publisher, Random House, appropriately entered into a modest licensing arrangement with the Estate despite Mr. Klinger’s position against such a license. Mr. Klinger did not provide his second story collection to the Estate, but one of the writers for that new collection told the Estate he wished to use a protected character, Langdale Pike, from the post-1922 stories. The Chicago Court reiterated that the character is fully protected by copyright law.

The Conan Doyle Estate’s trademark rights in the SHERLOCK HOLMES name and image were not at issue in Mr. Klinger’s lawsuit and remain unaffected. A new SHERLOCK HOLMES novel licensed by the Estate and written by Anthony Horowitz is due out in 2014, and the International Exhibition of SHERLOCK HOLMES will move in February from its premiere venue in Portland, Oregon, to the next stop on its United States tour, the Center for Science & Industry in Columbus, Ohio.

What are we to make of this? Clearly, we're not legal scholars, but as with any legal decision, this is merely another step in the definition of case law, which is an ever-evolving process. And intellectual property law is probably the trickiest of them. The fun part with lawyers is that whether they land on the winning or losing side, it's never over for them.

We do question, however, whether or not the characters of Sherlock Holmes and Dr. Watson can be copyrighted - something we covered with Betsy Rosenblatt in our interview with her.

We'll just leave you with this quote from "The Retired Colourman," appropriately enough from the still-protected 10 stories in The Casebook of Sherlock Holmes:

"Is not his story a microcosm of the whole? We reach. We grasp. And what is left in our hands at the end? A shadow." [RETI]