"that gap on the second shelf" [EMPT] 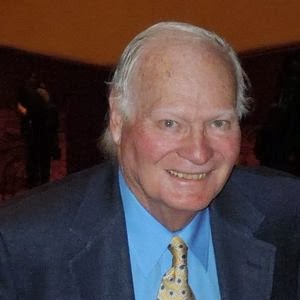 Vincent Brosnan died at his Oceanside, California home on December 28th  at the age of 80. He was born in New York City, and after two years at the University of Notre Dame was drafted into the Army. He served for two years and was stationed in France. In January of 1959 Vinnie graduated from the Cinema Department at the University of Southern California and the following year was hired by NBC at their Burbank Studio, where he spent 33 years of his professional career with NBC and KNBC News as Editor and Supervising Editor of News Programs. He received two Los Angeles Area Emmys, the Los Angeles Press Club Award, and the George Foster Peabody Broadcasting Award. Vinnie enjoyed tennis, opera, and promoting and celebrating Sherlock Holmes.

During his high school days in the late 40's, Vinnie listened to the Rathbone/Bruce weekly radio programs and attributed them and their movies to his love of Holmes. After his graduation in 1959, with no job and little cash, he wandered into a bookstore and, although he couldn't afford it, he bought two Sherlock Holmes books for $10. He claimed that the purchase changed his life.

In Vinnie's own words (courtesy of the John H. Watson Society)


"In my high school days (the late 1940s), I was exposed to the world of Sherlock Holmes in three distinct ways: by reading the original Arthur Conan Doyle stories; by watching the Universal Studio movies that were in production starring Basil Rathbone and Nigel Bruce; and by listening to the weekly radio program sponsored by Petri Wine and also starring Rathbone and Bruce. I was totally taken by the radio programs which allowed full range to my imagination and appreciation of Rathbone's unique voice and inflection which made the action believable. I believe it was the combination of Rathbone's voice and the inciting of my imagination that was the mainspring of my love for Sherlock Holmes. Another influence was the romance of the Victorian Age which was inbred as my father was a true Dickensian.

Going forward to 1959: an important year of my life. I graduated in January from the Cinema Department at the University of Southern California and began the almost impossible task of finding employment in Hollywood. By June, with no prospects in sight, I was discouraged and running out of needed cash. There was a bookstore in downtown Los Angeles that had displayed on its top shelf the three volume Heritage set of Sherlock Holmes, The Later Adventures of Sherlock Holmes, and The Final Adventures of Sherlock Holmes. The books were priced at five dollars each. I knew I couldn't afford it, but I bought them anyway, and it was a purchase that changed my life.

At that time, my nights were sleepless. To relieve my restlessness, I took up my Sherlock Holmes adventures. I read them all two or three times and was completely captivated. What a wonder these stories were, a perfect mixture of charm and adventure. They helped alter my spirit and attitude. Soon afterwards, in June, I got my foot in the door at the NBC Studios in Burbank--the start of a thirty-three year career.

Does Sherlock deserve credit? You bet he does! With a paycheck in my wallet, I could let loose some of my collecting urges and all the fun that comes with it. Up to that time, I had never joined a Sherlock Holmes club, better known as scions. I took a different route. Over time, my collection grew, resulting in an overfilled garage, and my dear wife pointed out the need for clearing it out. This crisis has not changed in over forty years of marriage. Nevertheless, the crisis was of good fortune. I formed my book service and named it Sherlock in L.A. Since then, fourteen privately printed catalogues featuring many great Sherlockian book collections for sale have been produced and all were well-illustrated and, more import, well-received by the Sherlockian collector world. Among those memorable sales of great collections was the John H. Watson Society Emeritus Founding Member, the late Col. Ted Schulz, who is featured here in the Watsonian Limelight. The extensive catalogue of his collection is now a collector's item in its own right.

In 1988, I became an active member of the Trained Cormorants, one of the oldest scions in the U.S. (founded in 1947) and I became the custodian of their archives. Shorty thereafter, I formed a publishing arm named The Sherlock n L.A. Press and produced three major monographs, all of which are now highly collectible. The first wasThe Sherlock Holmes Mother Goose by Paula Salo; the second was The Trained Cormorants 60th Anniversary Commemorative which was the scion's history accompanied by many archival photographs; and the third was The Sage of Santa Fe: Adventures and Public Life of John Bennett Shaw written by Susan Rice and myself.

It was with the Cormorants that I attended many of the important conferences and other Sherlockian gatherings in the 1990s. One was in 1995 for the dedication of the John Bennett Shaw Library at the University of Minnesota. The prior year, my dear wife Flavia and I went to London for the Back to Baker Street Festival where I met and friended Dame Jean Conan Doyle, who was Conan Doyle's daughter and the last of the Conan Doyle descendants. This, I would add, was one of the great highlights of my life, and there have been many. I was so glad I was wearing a hat with her father's name on it; I could see how happy this made her.

The other event, which ranks as one of the great surprises of my life, was my introduction by Michael Whelan, the Wiggins, into the Baker Street Irregulars. My investiture is "That Gap on That Second Shelf," which is a line spoken by Holmes while disguised as an old bookman.
How fitting were these words for a bookman like myself. In reading over this thumb nail sketch, you can appreciate how my life's journey with Sherlock Holmes led to many rewards and new friends. But this, of course, is only part of the story. There is so much more to be said and remembered. I have always viewed my collecting endeavors as one of responsibilities; that is, to inform, educate, and advance many Sherlockians on the significant studies, scholarship, and endless variety of pastiches that have gone before. This is a wide subject which, for right now, I have to put on hold."


Vinnie was a staunch supporter of the BSI Trust and in his words stated that "For me, the Trust is much more than just an adjunct to the Irregulars -- it represents all in one, its past, present, and future, the very heart of our organization, and so requires the deference of serious consideration of all."

Vinnie Brosnan was invested into the Baker Street Irregulars in 2011 as "That Gap on That Second Shelf."

His online obituary can be found here, where you can leave memories for his family.