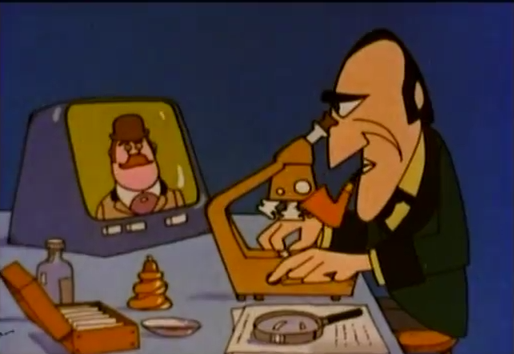 We were recently reminded of a very obscure appearance of Sherlock Holmes: this industrial film commissioned by the Electricity Council of the UK in 1972 to explain the construction and use of metal sheathed elements. The film sequences include several case studies and feature Sherlock Holmes and Dr. Watson, with a surprise appearance by Mrs. Hudson.

The film was produced by the Larkins Studio, with animation by Spud Houston, Eileen Matthews and Doug Jensen, with script, storyboard and direction by "Sid Mould." According to the BFI, it features the voices of Frank Duncan and Norman Bird, as Holmes and Watson.


And in a further twist - just to demonstrate how Sherlock Holmes connects nearly every actor - you may recognize the actor portraying Inspector Lestrade above as Patrick Newell, who also played Blessington in the Granada production of "The Resident Patient," with Jeremy Brett in the lead as Sherlock Holmes.

At any rate, this is one of many uses of Sherlock Holmes in advertising - a practice that goes back to his creator's time. This was the topic of the 2009 Baker Street Journal Christmas Annual: "Did you notice nothing curious about that advertisement?"

And lest we miss an opportunity to mention the #FreeSherlock movement, the final frame indicates:
"The characters of Sherlock Holmes and Doctor Watson used by arrangement with Baskervilles Investments Limited." Evidently, an earlier incarnation of the Conan Doyle Estate, Ltd. organization.