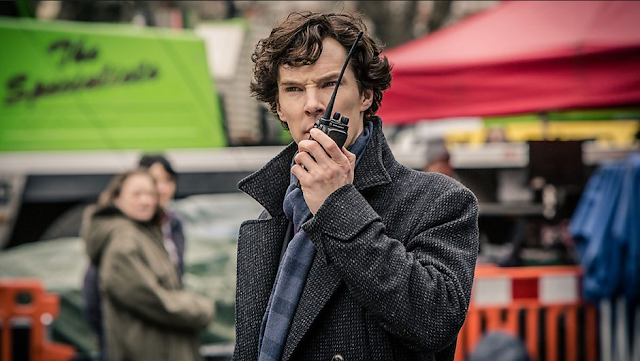 As you know, this Sunday evening, January 19, 2014 at 9:58 p.m. EST, Sherlock returns to Masterpiece on PBS with Season 3. And following a very successful tradition (first started with our Twitter chat of Season 1 and followed by the same for Season 2), we've been asked by the fine team at PBS to host a Twitter chat during the show.

A Twitter chat is simply a live commentary that runs along with the television program; it is not designed to share spoilers, nor is it meant to replace the show itself. Think of it as a living, breathing, trivia section from IMDb.com, with interaction and observations. Our particular interest is finding the references, quotes, characters and untold tales from the original Sherlock Holmes stories as they appear in this modern production, and pointing them out with #OriginalQuote.

We'll be starting with "The Empty Hearse" on the 19th, followed by "The Sign of Three" on the 26th and concluding with "His Last Vow" on February 2. The chats will run concurrently with the show, which begins straight after Downton Abbey, beginning at 9:58 p.m. EST and concluding at 11:30 p.m.

In addition to @IHearofSherlock, the chat will also be hosted by @James_Hibberd from Entertainment Weekly, noted Sherlockian and fellow Baker Street Irregular @lklinger, as well as @Masterpiece and @PBS. The hashtag to follow will be #SherlockPBS.

Show your support by tweeting:

You can simply follow along on twitter.com, but there are other resources we recommend to keep up with the stream, such as Tweetdeck, TweetChat and Twitterfall.

Some notes about what's going on over on the PBS website:
We look forward to having you join us on Sunday evening and tweeting along with the #SherlockPBS hashtag. Say hello to us on @IHearofSherlock and let us know what you think of the program.