Sherlock Holmes, Consulting Detective - The Gift That Keeps On Giving

"I don't deny that it is smartly written" [STUD] 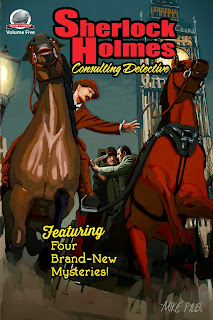 For many, stories involving Sherlock Holmes and Watson often feature elements of pastiche and mashup, with Holmes running into various other characters in Victorian Literature. Thankfully, Airship 27 Productions has released the fifth volume of its Sherlock Holmes, Consulting Detective series, which is not just a great gift suggestion...but is well worth owning by any serious Sherlockian.

All of the stories in this series focus on classic Holmesian deduction and detective work - perhaps written with a slightly more modern influence, but these would be tales that Conan Doyle himself would be proud to consider part of the Canon. (Even down to the interior illustrations, these tales read like long-lost editions of The Strand).

Thankfully, there are enough stylistic variances that make this a really great collection, including

A pair of essays finishes Sherlock Holmes, Consulting Detective Vol. 5, and there is only one "problem" with the book - once finished, you will be sorely tempted to pursue the first four volumes.

Ultimately, this is the best gift that any Sherlockian can give or receive: tales of pure Holmesian delight.

(Note: I was fortunate enough to be asked to provide proofing and editing duties on this book, and received a complimentary copy. My opinions are my own)
--