"The aged ecclesiastic had turned his face towards me" [FINA] 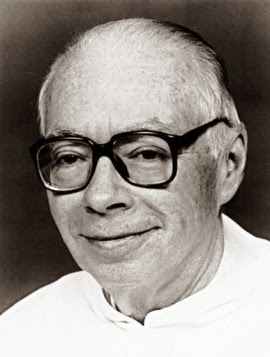 Father George Leonard Cochran died in Ohio on March 30th at the age of 84. He attended Providence College's pre-ecclesiastical program from 1947-1949. After working in the advertising department of a firm in Atlanta, GA, he joined the Air Force in 1951 and served in Germany. He was honorably discharged in 1955 with the rank of staff sergeant and entered the Dominican Friars at St. Peter Martyr Priory in Minnesota, receiving the religious name Leonard.

Father Cochran earned a BA in philosophy from St. Thomas Aquinas College in Illinois and an MA in theology from Aquinas Institute of Theology in Iowa. He was ordained a priest in 1962.

While in Illinois, Father Cochran taught English and theology at Fenwick High School, serving as chair of the English Department from 1964-1969. He then earned an MA and Ph.D. in English from Loyola University, where he taught English, and an MA in liberal arts from St. John's College in Annapolis Maryland.

In 1980 Father Cochran joined the Providence College faculty, where he taught English, philosophy, and humanities before retiring with the rank of associate professor in 2002.

A member of the Poetry Society of America, Father Cochran was a lyricist, prolific poet, and scholar of the writing of Gerard Manley Hopkins. His poems and articles appeared in dozens of periodicals including The Atlantic Monthly, religious and scholarly journals, and literary magazines.

Do you have any connection with or memories of Father Cochran? Please share them below.
--