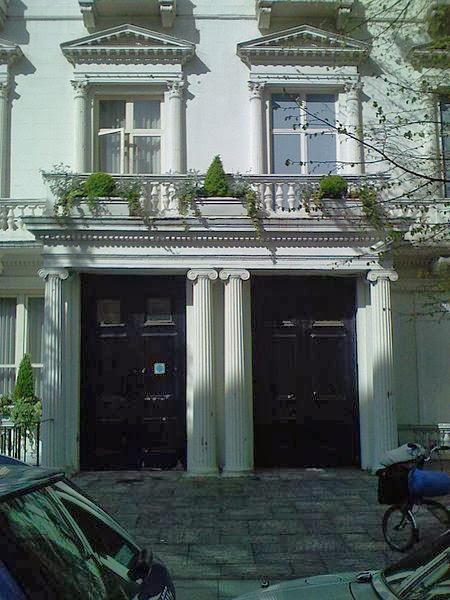 We all know that Sherlock Holmes made his return from the Reichenbach when he appeared in "The Adventure of the Empty House," the first of the short stories that make up the collection The Return of Sherlock Holmes.

Upon his return, he enlisted Watson's help to track and capture the murderer of the Hon. Ronald Adair. The path that the duo took to stake out their prey led through through byways and passages, a network of mews and stables and to a small road that contained the empty house to which the title of the story alludes:


"Do you know where we are?" he whispered.
'Surely that is Baker Street," I answered, staring through the dim window.
"Exactly. We are in Camden House, which stands opposite to our own old quarters."

But of particular interest is the true empty house of London. If you happen to find yourself in Bayswater, London, you'll have the opportunity to visit numbers 23 and 24 Leinster Gardens. But don't expect to be admitted - or for anyone to even answer the door. There's no one home.

The reason is that 23 Leinster Gardens is truly an empty house; or rather just the facade of a house. If you check out the extensive photos on 150 great things about the Underground, you'll see that Nos. 23 & 24 were never built as houses. Rather, the Metropolitan Railway was built (now the District and Circle Lines of th eUndergroun) needed some ventilation for its steam trains. So rather than leave an open railway in the midst of a residential area, facades of houses were built to match the rest of the neighborhood and the rear was left open.


But readers familiar with the Canon should recognize another familiar reference: that of "The Bruce-Partington Plans." You may recall that Sherlock Holmes determined that Arthur Cadogan West was murdered and then placed on the roof of a train. Of the active spies who would have been interested in the plans, only one lived in the proximity of a rail line:


"Yes, that was it. Mr. Hugo Oberstein, of 13, Caulfield Gardens, had become my objective. I began my operations at Gloucester Road Station, where a very helpful official walked with me along the track, and allowed me to satisfy myself not only that the back-stair windows of Caulfield Gardens open on the line, but the even more essential fact that, owing to the intersection of one of the larger railways, the Underground trains are frequently held motionless for some minutes at that very spot."