"a little amusement at his expense." [SILV] 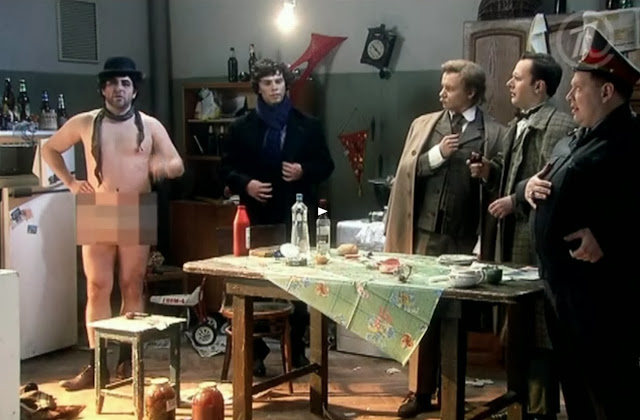 We're fortunate that today in the 2010s, we live in an age of many Sherlocks. But this is nothing new; many previous generations can claim the same thing.

The 1990s brought us the conclusion of the Jeremy Brett / Granada Holmes, but also saw the likes of Christopher Lee, Edward Woodward and Charlton Heston get into things, despite their age, physical shape or accent.

Of course Jeremy Brett dominated the 1980s, but that's the decade that also gave us Michael Caine in a send-up as well, Ian Richardson in some well-dramatized versions of the longer stories, both Guy Henry and Nicholas Rowe tried their hands as a young Sherlock Holmes, Peter Cushing went the other direction and played Holmes in his retiring years, and who can (or would like to) forget the animated (on screen, not as a voice) Sherlock Holmes played by Peter O'Toole.

The widest range of actors played Holmes in the 1970s - from Robert Stephens to George C. Scott, Stewart Granger to John Cleese, and Roger Moore to Nicol Williamson. And we'd be remiss if we didn't mention Gene Wilder, even though he starred Holmes's brother, with Douglas Wilmer making a cameo reappearance.

We could recap each decade similarly, going all the way back to the early 20th century. But for a tour de force approach to multiple Sherlocks in a single adaptation, we'll turn to the Russians. It's a parody that brings together the traditional, the Downey and the Cumberbatch Holmeses with mostly universal humor that can be understood by all - and even more so with the helpful translation of a Tumblrer that have been turned into subtitles.