"I reviewed the whole extraordinary sequence of events" [SIGN]

There's been a lot of chatter about the new Sherlock Holmes film lately. The general public seems to be pretty excited about it - of that there is no doubt. The Sherlockian community has alternatively greeted the whole affair with trepidation and a wait-and-see attitude.

But we can begin to set aside some of our worries, as the first official review of the movie is in. In this case, it comes from John Rabe, whose father was W. T. Rabe, BSI ("Colonel Warburton's Madness"), a dedicated Sherlockian from the 1940s until the early 1990s. John has written it up on his blog on the 89.3 Southern California Public Radio site.

Here are the pertinent bits:

I saw a preview of “Sherlock Holmes” last night on the Warner Brothers lot.

Yes, the score and the sound design are bombastic. Note to Guy Ritchie:

Just because you have Dolby-9.11-Superrumble-Extrabada** doesn’t mean you have to crank the mid- and high-end on every door that closes and every locket that snaps shut. You might be surprised to learn that people – even kids today – can hear okay with the volume at 6 instead of 11, and since we can see the door closing, we can develop our own emotions about it without the sound design telling us what to feel about it. And the camerawork is far too busy. Again, I’m pretty sure kids can enjoy a 30-second scene without 90 cuts, ten zooms, and three flashbacks.

Overall, I was relieved and pleasantly surprised.

Both Holmes and Watson are rather more physical than is commonly understood from the Canon, and they spend a lot more time fighting baddies. But, one could say Watson was a former soldier in Doyle’s stories, and Holmes was an expert in "baritsu" and something of a boxer, so their being active is not illogical. Irene Adler is not quite the Victorian lady of the Canon ... since she is an accomplished kickboxer and thief. That said, I'm rather tired of the Victorian ladies who are always fainting or screaming and letting themselves get tied to railroad tracks while the men have all the fun. No ladies scream in this movie.

Inspector Lestrade is very nicely played by Eddie Marsan (the driver’s ed teacher in "Happy-Go-Lucky" and the evil dude in "Hancock"), and he’s much less the bumbler than Doyle depicts him.

Speaking of bumblers, other movies have already corrected Nigel Bruce’s moronic Watson...but Jude Law’s Watson is very nearly Holmes’ equal in most areas, and better in some. This is good because, as other commentators have pointed out, it makes no sense that a man like Holmes would hang out with the idiot that Doyle (and Bruce) make of Watson. In the new movie, Holmes and Watson have a very nice intimate relationship, much more like brothers than master and apprentice, which I also find refreshing.

The plot also takes some nice jabs at the Da Vinci Code movies, and there’s a very funny joke about a certain modern device.

For all the action and loud music, there are many nice subtleties in plot, script, acting, and the design of the film. To name just one, Her Majesty does not appear.

The only true blunder/liberty I spotted is that in the movie, Watson is engaged to Mary Morstan before Holmes meets her, when of course, in Doyle, they got engaged after a case Holmes solved.

Using the Leonard Maltin BOMB-4 stars scale, I'd give it 3.5 stars.


You can read John's entire review on his blog, and you can check out his weekly show Off Ramp.


And if you'd like to pre-order a copy of the bombastic score he mentioned, you can do so here: 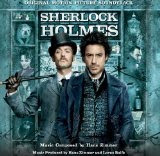 The original soundtrack score to "Sherlock Holmes" is by Hans Zimmer, who is also known for his musical work on The Pirates of the Caribbean

Has anyone else seen a screening of the movie yet? Please leave a comment below and share your impressions with us. Or let us know if the Rabe review encourages you or not.