"The Trend of Events" [LAST]

Opening day of the film "Sherlock Holmes" resulted in lots of online chatter. Twitter, as mentioned previously on these pages ("With Every Nerve in a Twitter" [TWIS]) manages to capture that public commentary in near real-time. And it's a fairly decent barometer of the public's reaction to any given current event, as we witnessed in 2009 with the death of Michael Jackson, the Tiger Woods affair(s) and events in Iran, to name a few.

On December 26, we monitored some of the chatter on Twitter using the search feature at http://search.twitter.com which contains a listing of the top 10 trends at any given moment. Throughout the day, the terms "Sherlock" and "Sherlock Holmes" were squarely in the middle of the trending topics and remained there consistently - even beating "Happy Boxing Day" at one point: 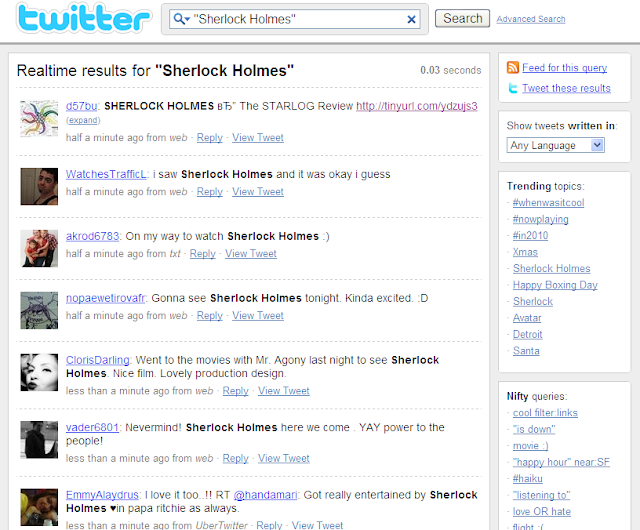 That trend continued on December 27th as well.

When one stops to think about it , it's an amazing feat for a character so firmly rooted in the 19th century to appear in the public stream of consciousness so solidly. In addition, there are reports that not only did the film beat the 3-D special effects film "Avatar,"  but it also set the record for a Christmas Day opening. Overall, it took in $65.4 million at the box office for the weekend. Not to shabby for someone whose rates were on a fixed scale.