"We Could Plainly See the Figures on Her Deck" [SIGN] 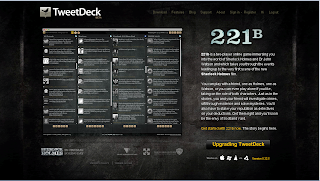 In the continued marketing effort for the upcoming Warner Bros. "Sherlock Holmes," we're seeing more of an online push.

Tweetdeck, which is a desktop application for people who use Twitter, has developed a new theme called the Tweetdeck Telegram Co. - prominently featuring the 221B game we reviewed here last month.

If you use Twitter, there are applications such as Tweetdeck that allow you to sort your followers into groups, in order to manage the flow of information. You can create a number of columns, to make the scanning easier. For example, you can create a column with just replies to you; a column that features results from a search term you've input (such as "Sherlock Holmes"); and the Sherlockian version of Tweetdeck allows you watch a column called "Inside 221B" which shows you updates of characters in the game, such as Madame Rowena and Mrs. Hudson's Diary.

It's a very nice interface, with a Victorian / Steampunk flavor to it. Here's what it looks like after you get things going. 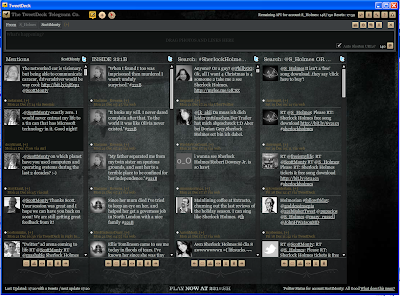