"You would never guess in a hundred years what we did find." [SECO] 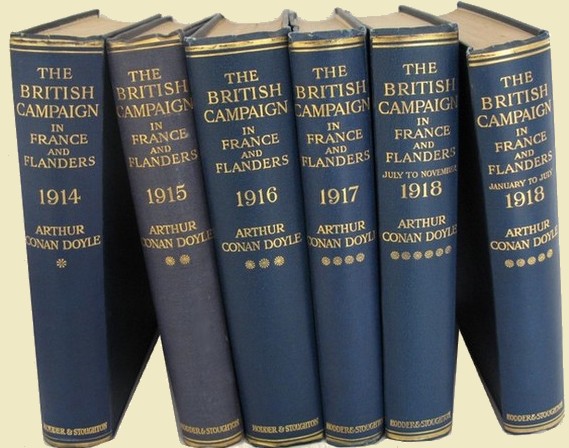 We have no Sherlockian centenaries in 2016 — well, that's not true, since we've just been celebrating the film starring William Gillette as Holmes, which was produced by Essanay in 1916, but no centenaries of actual Sherlock Holmes stories, anyway. After The Valley of Fear, serialized in 1914-15, there would be no more Canonical tales until 1917.

Arthur Conan Doyle was busy with other matters, chiefly in writing about the First World War. The only fiction he published during 1916 was "The Prisoner's Defence," a brief love story with a war background. His writings in magazines and newspapers that year were about air raids, the killing of civilians in battle zones, and body armor — and, towards the end of the year, the doctrine of Spiritualism, as he at last declared himself a believer.

April 2016 does mark the centenary of a very important work by Sir Arthur Conan Doyle: "The Battle of Mons," appearing in the Strand magazine, the first installment of what would eventually be a six-volume history, The British Campaign in France and Flanders

. The Battle of Mons had been fought in August 1914, barely two weeks after the first British troops landed in Europe at the war's beginning. It ended in a massive British retreat, a traumatic experience that helped create the enduring legend of "the angels of Mons," who guided lost soldiers to safety. Ironically, the angels were themselves fiction, created in a short story by Arthur Machen, and thus are not mentioned in Conan Doyle's historical work.

In May 1916, Conan Doyle headed for Europe himself, invited to see the action at close range in order to write war propaganda and history more convincingly. His tour of the action in France and Italy lasted about a month and led to the short book A Visit to Three Fronts

In that reminiscence, he speaks of visiting the French army's headquarters at Montreuil and meeting General Georges Louis Humbert. "He fires his remarks like pistol shots at this man or that," Doyle wrote.

"Once to my horror he fixed me with his hard little eyes and demanded 'Sherlock Holmes, est ce qu'il est un soldat dans l'armée Anglaise?' ['Is he a soldier in the English army?'] The whole table waited in an awful hush. 'Mais, mon general,' I stammered, 'Il est trop vieux pour service.' ['General, he is too old for service.'] There was general laughter, and I felt that I had scrambled out of an awkward place."


But when he returned to England, he decided he had better write "The War Service of Sherlock Holmes" after all. That story eventually appeared under the title we now recognize, "His Last Bow" — but in 1917, not 1916. We can celebrate its centenary next year.