"beyond the limits of human ingenuity" [WIST] 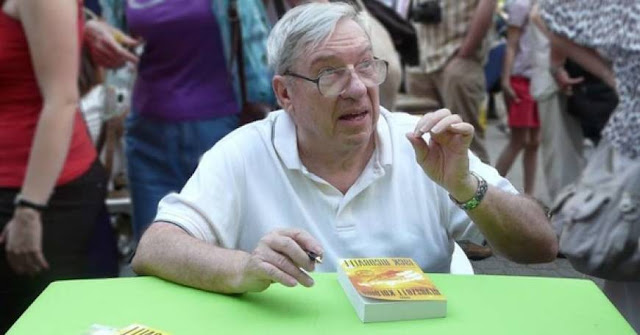 Many authors are successful, but Jack McDevitt is a one-of-a-kind legend in the world of science fiction. Stephen King calls him, "the logical heir to Isaac Asimov and Arthur C. Clarke." Harlan Ellison says, "'Why read Jack McDevitt?’ The question should be: ‘Who among us is such a slow pony that s/he isn’t reading McDevitt?'"

Mr. McDevitt has been nominated for the Nebula Award 18 times and won it in 2006 with his novel Seeker.  He has won a slew of other awards including the Philip K. Dick Award, the Campbell Award, the Robert A. Heinlein Award, and he even is going to have an asteroid named after him!

One may ask, why interview a science fiction author for a Sherlock Holmes blog?  Because Mr. McDevitt has penned his first Sherlock Holmes story for the anthology Beyond Watson which is currently raising funds through a Kickstarter campaign.  I contacted Mr. McDevitt in August of 2015 to see if he would be interested in contributing a short story to an H.G. Wells collection for Belanger Books. I also mentioned that I was putting together Beyond Watson.  Much to my surprise and delight, Mr. McDevitt's reply was, "I'd be interested in doing the Holmes anthology."  After that, Jack sent me the story, "The Lost Equation," narrated by the famous reporter Henry Mencken.  I interviewed Jack, via email, about his story, his interest in Holmes, and asked why so many science fiction fans are drawn to the great detective.

I Hear of Sherlock Everywhere: What made you, a sci-fi legend, want to write a traditional Sherlock Holmes story?

Jack McDevitt: I’ve been a Holmes fan since the days of Basil Rathbone. Got annoyed with Conan Doyle when, in the summer of 1955, I finished the Holmes stories and could not understand why Doyle had wasted time writing about a guy named Challenger and historical novels and even a play devoted to boxing instead of staying on Baker Street. If we ever really get a time travel capability, we should send someone back to talk sense to him.


IHOSE: Your story in Beyond Watson, "The Lost Equation," is told by a real life character, H. L. (Henry) Mencken. What made you decide to use the real life journalist to tell your tale?

JM:  In his tendency to cut through the nonsense go after hypocrisy and stupidity in all its forms, Mencken has no equal. I used him as a model for a recurring character in the Academy novels. And I sincerely wish he were around today.


IHOSE: What were some different challenges to writing a Sherlock Holmes story as opposed to a science fiction tale?

JM: Fiction is fiction. The idea is to create an experience the reader can feel. In which he is actually present in the starship, or back at 221B Baker Street when Holmes and Watson are discussing the curious business of the blue carbuncle. Science fiction is defined in terms of technological capabilities or where the future might take us. And I guess my Holmes story does deal with how the future, as seen from Holmes’s time, might develop. But basically, the creative aspect is the same: Make the reader forget she’s sitting at home in an armchair and reading a story. The only difference is that she’s living through events on and around Baker Street instead of on the bridge of an interstellar vehicle.


IHOSE: There is a rich tradition of science fiction authors writing Sherlock Holmes stories. Isaac Asimov was even a member of the Baker Street Irregulars. What is the appeal of the Holmes character to writers of sci-fi?

JM: I was four years old when Rathbone and Flash Gordon came into my life. I’m not sure about a direct connection other than that both appealed so vividly to my imagination. Holmes and Watson were alive, and so was the discovery that there were other planets. I wanted to ride with Flash, Dale, and Zarkov in that remarkable rocket ship, even though it had neither an airlock nor a washroom. But Holmes and Watson, and the discovery of a world beyond the rooftops, both became integral to my life.


IHOSE: If a Sherlock Holmes fan wanted to start reading your science fiction books, which book would you recommend as a starting place? Why?

JM: Probably A Talent for War. It’s a mystery set in the 12th millennium: A starship has seen something that the government is trying to keep quiet. An antiquarian, Alex Benedict, becomes intrigued and goes looking for the truth. In later novels, Alex and his associate, Chase Kolpath, find themselves pursuing other historical mysteries, like what happened to the artifacts from the 20th century moon landings, which disappeared shortly after the Golden Age (as they think of our era) had ended.


IHOSE: The question I ask all Sherlockians - If you were stranded on a desert island with only one Sherlock Holmes story, which would it be and why?

JM:  The story I’d want to have on the island:   “A Scandal in Bohemia.” It introduces Irene Adler, and Holmes is outwitted.


IHOSE: What are your current projects?

JM: I’m working on an Academy novel, which features the star pilot Priscilla Hutchins.  In the 23rd century, though we’ve had FTL (i.e. faster than light) for several decades, we haven’t found a high tech civilization. Then we see evidence of interplanetary activity in a system 24,000 light-years away. Priscilla and a small team head out to find out what’s going on.

JM: I can’t come up with a serious explanation for the connection between SF and Holmes. Maybe that’s because it runs too deep. I’ve enjoyed other characters in detective fiction over the years, like Hercule Poirot and Columbo, but none ever took over my life the way Holmes did. I can’t imagine my life without Sherlock and science fiction any more than without baseball, music, and beautiful women.

For more on McDevitt's Sherlock Holmes story, "The Lost Equation," in Beyond Watson click here.


Jack McDevitt is is an American science fiction author whose novels frequently deal with attempts to make contact with alien races, and with archaeology or xenoarchaeology. His two main series are the Alex Benedict series and the Priscilla Hutchins series. He has been nominated for the Nebula Award 18 times and won the award in 2006 with his novel, Seeker.  Mr. McDevitt currently resides in Brunswick, Georgia.