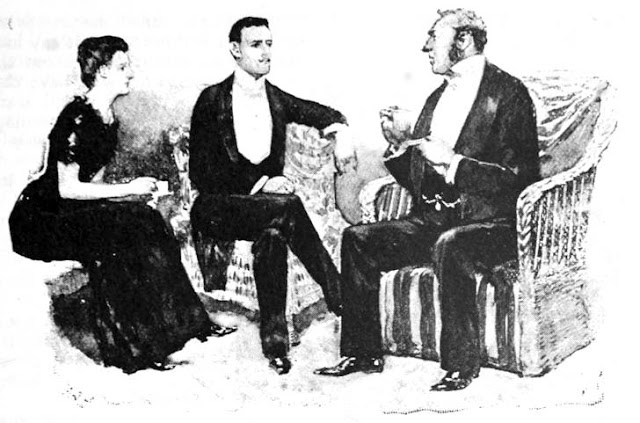 Name-calling about who's a legitimate Sherlockian, and disagreement about the things the young people enjoy doing — it sounds like the culture conflicts of today's Sherlockian world, but what do you know, the same things were going on half a century ago. A lot of the controversy now is about ships, whereas in 1968 it was about crossovers, but otherwise, well, we've been here before.

"she went straight to her uncle" [BERY]

The story starts with the September 1966 issue of Baker Street Pages, a newsletter I edited during my teenage years. That issue contained a six-line letter from Barbara Goldfield, a teen in the suburbs of Philadelphia. She made a suggestion that would hardly raise an eyebrow today: she identified Professor Moriarty's criminal network with T.H.R.U.S.H., the evil organization battling U.N.C.L.E., the United Network Command for Law and Enforcement. The Man from U.N.C.L.E., starring Robert Vaughn as Napoleon Solo and David McCallum as Illya Kuryakin, was a hugely popular series on NBC television that year, and Barbara suggested using it as a source for a study of Moriarty.

"If she is so interested in U.N.C.L.E., T.H.R.U.S.H. and all the books thereof," someone shot back in the next issue, "I suggest that she resign from the Pageboys and start an U.N.C.L.E. society on the happenings of that far-fetched mythical group of morons." Such invective might not be out of place on Tumblr, Facebook or other social networks today, although most Sherlockians are familiar with crossovers, linking Holmes with everybody from Doctor Who to Fu Manchu.

In December 1967, Barbara was back in Baker Street Pages with what would turn out to be one of the classic pieces of Sherlockian writing, a page and a half of text under the title "Did Sherlock Holmes Have Pointed Ears?" This was crossover more enduring than anything that had been said about U.N.C.L.E., for it pointed out the parallel between Sherlock Holmes and Mr. Spock of Star Trek (then just one year into the original series). The link between Holmes and Star Trek is more or less taken for granted now, especially as Nicholas Meyer, the author of The Seven-Per-Cent Solution, is known to have introduced Sherlockian themes into Star Trek episodes. But 25 years before Spock claimed Holmes as one of his ancestors, Barbara nailed the similarities. She had also written brief pieces connecting Holmes with Batman, Gandalf, the Phantom of the Opera, and probably others.

This was odd stuff, in a Sherlockian world largely committed to the theories of William S. Baring-Gould about Holmes's love affair with Irene Adler

and his involvement in solving the Jack the Ripper murders, to say nothing of Watson's San Francisco marriage. (Nothing unusual here, nothing to see, but be sure to read Rex Stout's "Watson Was a Woman.") Another teenage Sherlockian said in an angry letter to Baker Street Pages that he was "sick of being patronized" by the older generation who took it upon themselves to tell junior Sherlockians what to do and what to write. However, he agreed that quite a bit of what the younger generation was writing was piffle, including invocations of Mr. Spock, Gandalf, and the rest.

Generations are always in conflict (have you read "The Beryl Coronet" lately?) but 1968 was the beginning of a particularly dramatic time, with student demonstrations, riots, confrontation over the Vietnam war. My generation were the baby boomers, and there were millions of us, and as we reached the age to assert ourselves in political and social change, we were also ready to stand on our dignity in the Sherlockian world as well. The letters column in Baker Street Pages makes it clear that we did not agree on much (there were as many people denouncing the Spock and Gandalf crossovers as there were discovering them), and we were not always setting ourselves up in opposition to the established Sherlockians, but we were definitely on the scene.

"It's all been done before and will be again." [VALL]

Now, of course, we're the older generation. Unease in the Sherlockian world these days centers largely on two issues: whether there is a subtext of homosexuality in the relationship between Holmes and Watson, and whether fans of the BBC Sherlock series, without an accompanying interest in the original Holmes canon, are legitimately Sherlockians.
However, there is also sometimes a generational divide, complicated by the reality that the majority of younger Sherlockians, and especially BBC fans, are female, but the majority of older Sherlockians are still male. Unremarkably, there was also a strain of gender politics in the tensions of the 1960s, which surfaced when the Adventuresses of Sherlock Holmes actually picketed the Baker Street Irregulars' 1968 dinner. Even apart from that issue, there was certainly a surge of young people impatient to find their place and flex their muscles.

No wonder, then, that in January 1969, Barbara announced in print that she was pulling back a little from Sherlockian activity. "It seems," the originator of the Holmes-and-Spock theory wrote in annoyance, "that if the most slightly out-of-the-way theory is brought up by one of the members, other members fall upon him like wolves on a lamb."

Sound familiar at all?